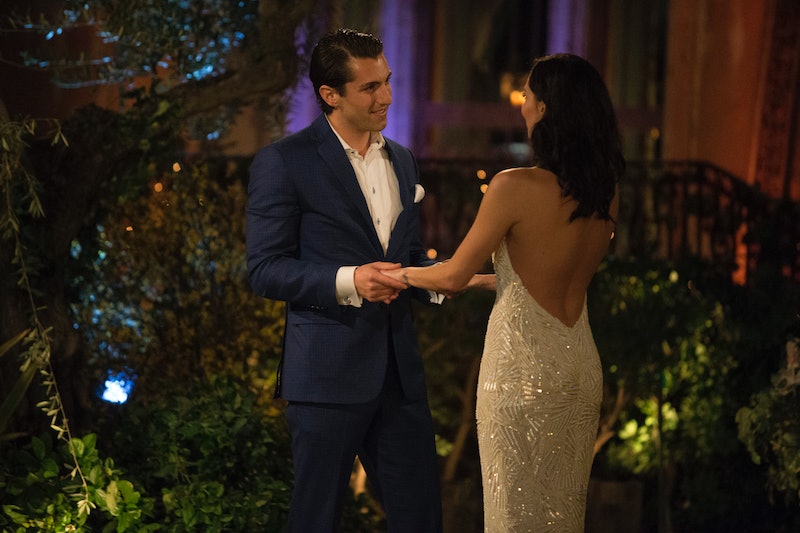 Some The Bachelorette contestants make their professions extremely well-known (looking at you, Jordan). But others play their work cards closer to the vest during their time on the show. While he hasn't made a plot point out of it, the job that Jason from The Bachelorette has may be even more prestigious than that of male model. His The Bachelorette bio states that Jason is a "successful" banker and judging from his social media profiles, his career is a major part of his life. So before Becca meets Jason Tartick's family on his hometown date, we should probably know a little more about this Buffalo-born banker's professional life.

During the hometown dates, Becca will go to Buffalo, New York, to meet Jason's family. But according to his LinkedIn profile, Jason is actually currently located in Seattle. He works for Key Corporate and Commercial Bank in the Pacific Northwest city, but his roots are definitely in upstate New York. He went to the State University of New York (SUNY) at Geneseo where he earned a bachelor's degree in business administration.

He then went to Simon Business School at the University of Rochester for his master's degree in business administration for accounting and finance. He's been with KeyBank since finishing college in 2010 and is currently listed as "vice president - senior middle market banker."

While he has worked at KeyBank for eight years, his relocation to Seattle was fairly recent. He notes on his LinkedIn profile that he has been promoted seven times since he was hired. And it was his work performance in 2017 led to a job promotion in the fourth quarter that moved him to Seattle. But even though he has moved away from his hometown, Buffalo obviously holds a very special place in his heart. After Becca chose him for a hometown date in Week 7, he wrote on Instagram:

"For the majority who aren't from Buffalo, I apologize if my enthusiasm and continuous reference to the city is overzealous! That said, I hope the pride that I have for my city resonates with the pride you have for yours. Buffalo has taught me to be resilient and adaptable and has instilled on me the foundational impact and value of friends, family, and community involvement. We may attract blizzards, and endure tough Super Bowl loses (4 to be exact...in a row); but, we're a community that does everything in its power to thrive as one. I am so honored and excited to showcase Buffalo, NY, to @bkoof on @bacheloretteabc."

Based on his love of Buffalo, Jason's career must be pretty important to him since he chose a promotion over staying there. But it doesn't seem like it's all work and no play for Jason at KeyBank. After all, his bosses did allow him to take an extended break to find love on The Bachelorette. And his Instagram highlights that Jason is certainly making the most out of his profession.

As he shared on Instagram, Jason presented actor Tom Skerritt at the 46th annual Economic Forecast Conference of Seattle and King County in March 2018. According to Jason, the Alien, Top Gun, and Steel Magnolias actor joked about how Jason wasn't even born when Top Gun came out (which, to be fair, is true since Jason is 29 and the Tom Cruise flick came out in 1986). You can watch Jason take the stage and introduce the actor in the video below.

Jason's Instagram also shows how he has attended events hosted by the International Council of Shopping Centers (ICSC), an organization that focuses on the international retail real estate industry. For 2018, it appears Jason went to RECon — the Global Retail Real Estate Convention — in Las Vegas. At past ICSC events, Jason met Irish MMA fighter Conor McGregor and it looks like he even spent time with Lil Jon, who notably provided the mui Becca's first one-on-one date this Bachelorette season.

He has participated in the Buffalo Sabres Corporate Hockey Challenge through his work as well. The NHL team from Jason's hometown hosts a three-on-three hockey tournament where people from participating companies play alongside former Sabre players for charity.

As his LinkedIn profile states, Jason was a hockey player in high school (and his brother amusingly confirmed Jason's hockey player status on Twitter). The Buffalo Sabres Corporate Hockey Challenge also takes place at the KeyBank Center, so Jason is pretty perfectly suited to participate since the company he works for has its name on the arena in Buffalo.

Jason's career may have moved him away from his beloved Buffalo, but being a banker has also given him many opportunities. So if Becca does choose to keep dating him after hometowns, she should soon realize that she's sharing her fiancé with his work. Which is not a bad thing at all.