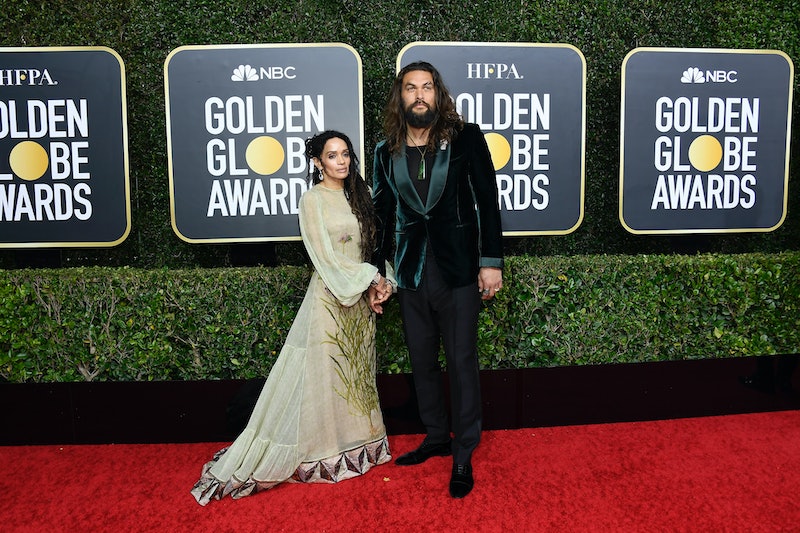 Jason Momoa wore a velvet teal jacket to the 2020 Golden Globes. Then, at some point, he took it off, leaving the internet to behold Momoa in a tank top.

The Aquaman star walked the red carpet earlier Sunday evening in a wide-lapeled tuxedo jacket layered over a black tank top. But by the time Brian Cox took the stage to accept his award for Best Actor in a Drama Series for Succession, it appeared draped over the shoulders of Momoa's wife, Lisa Bonet. Twitter was replete with screenshots from those who caught it all live as well as pleas for screenshots from those who blinked. "Everyone is talking about jason momoa's tank top and I MISSED IT. pls. a photo. anyone," begged one user.

Momoa, who currently stars in See from AppleTV+, presented an award later in the evening for Best Supporting Actress in a Drama, by which point, as one might have feared, his jacket reappeared.

But for this one stolen bare-armed moment, the internet would like to thank the Hollywood Foreign Press Association for setting the thermostat so low.

More like this
Here’s What Happens To Bill & Frank In 'The Last Of Us' Video Game
By Brad Witter
Michael B. Jordan Tackled His "Public Breakup" With Lori Harvey On 'SNL'
By Brad Witter
Britney Spears Shared The Real Reason She Shut Down Her Instagram Account
By Brad Witter
Katy Perry Honored Fiancé Orlando Bloom's Ex Miranda Kerr With A Sweet Speech
By Stephanie Topacio Long
Get Even More From Bustle — Sign Up For The Newsletter
From hair trends to relationship advice, our daily newsletter has everything you need to sound like a person who’s on TikTok, even if you aren’t.