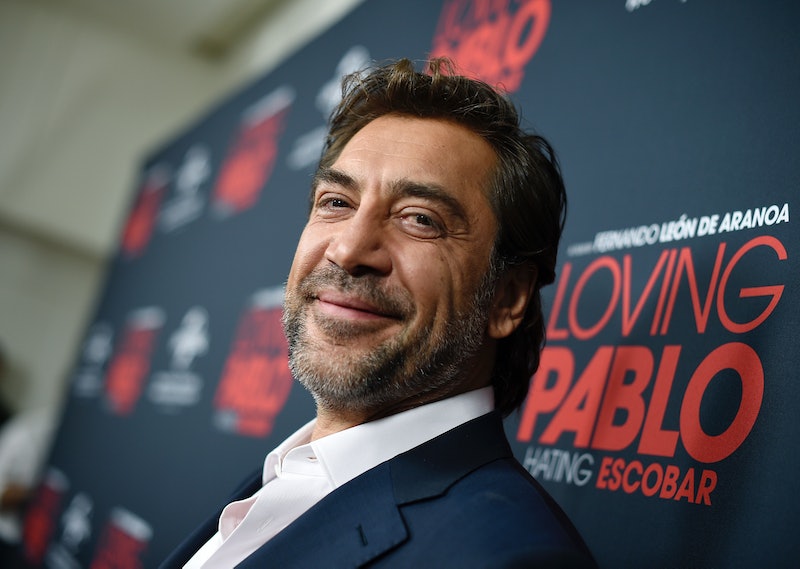 King Triton might be a little scarier than fans are used to. That's because Javier Bardem could play King Triton in The Little Mermaid. It's safe to say Twitter was surprised by the news that the No Country For Old Men actor might be going under the sea for the live-action Disney remake. No surprise, though, the internet had plenty of jokes for what Bardem as Ariel's dad might look like. While others, were excited for the possibility of another Disney classic with inclusive casting.

According to Deadline, Bardem is in talks to star in the remake alongside Halle Bailey, who will play Ariel. And almost immediately after the news broke on Wednesday, July 17, Twitter was posting photos of some of Bardem's more terrifying characters, like No Country For Old Men's Anton Chigurh or his Bond villain Silva from Skyfall, to help imagine what Bardem might look like with another outlandish hairstyle. Seriously, Triton's white mustache on Bardem would be a sight to behold.

Some like Vulture's Jackson McHenry, thought of some other roles they'd like to see him in instead. "hmm what if you just make a Mother! opera instead," he joked. But, others were excited to see and hear what Bardem might do with the role.

"I saw that Javier Bardem might be playing King Triton in the new Little Mermaid, and all I've been able to hear since is "He's a human; you're a mermaid" in THAT VOICE," a fan named @mkmcbrayer tweeted. "Honestly, it's the pep talk I've been needing for years."

Still, there were many who just wanted to point out what a big deal it would be to see Bardem, a Spanish actor, playing the father of Bailey, an African-American singer and actor. Some fans even compared it to the color-blind casting of Brandy's Cinderella, which came out all the way back in 1997.

"This cast is looking a lot like Roger and Hammerstein's Cinderella which is a huge plus for me," a user named @laverlyshai tweeted.

The possible Bardem casting news comes a day after it was reported that Harry Styles might play Prince Eric. (Sorry, all those who wanted Noah Centineo for the role.) It's also been reported that Melissa McCarthy will play Ursula, while Awkwafina and Jacob Tremblay will round out the cast as Ariel's besties Scuttle and Flounder, respectively. Lin-Manuel Miranda is slated to write additional music for the live-action film, directed by Mary Poppins Returns' Rob Marshall.

However, since Bardem hasn't officially been given the role yet, this means Terry Crews' Twitter campaign to play King Triton isn't over yet, which means there are more memes to come. Last week, Crews shared a photo of himself with mermaid tail. "Ariel's dad," he tweeted along with the hashtag #ArielsGotTerry, before adding, "Good thing I skip leg day because mermen don’t have legs!"

Clearly, Bardem has some serious competition. Especially, since Crews has called on his Twitter followers to retweet his King Triton-focused messages so Disney sees them. (He's at 10K retweets for that #TerryForTriton message.)

Crews might have an edge there, since Bardem hasn't tweeted since June 21. Though, his last tweet is about protecting the oceans, which is very on-brand for The Little Mermaid. So really all that's left to say is, may the best merman win.

More like this
The 'Scream 6' Trailer Shows Off Hayden Panettiere's Return & Ghostface In NYC
By Jack Irvin and Jake Viswanath
Anne Hathaway Shared A "Thrilling" 'Princess Diaries 3' Update
By Darshita Goyal
'Friends' Star Maggie Wheeler Offers Support To Matthew Perry After Reading His Memoir
By Alyssa Lapid
Netflix Shut Down 'Bridgerton' S3 Rumours About A “Very Dark” Storyline
By Bustle
Get Even More From Bustle — Sign Up For The Newsletter
From hair trends to relationship advice, our daily newsletter has everything you need to sound like a person who’s on TikTok, even if you aren’t.