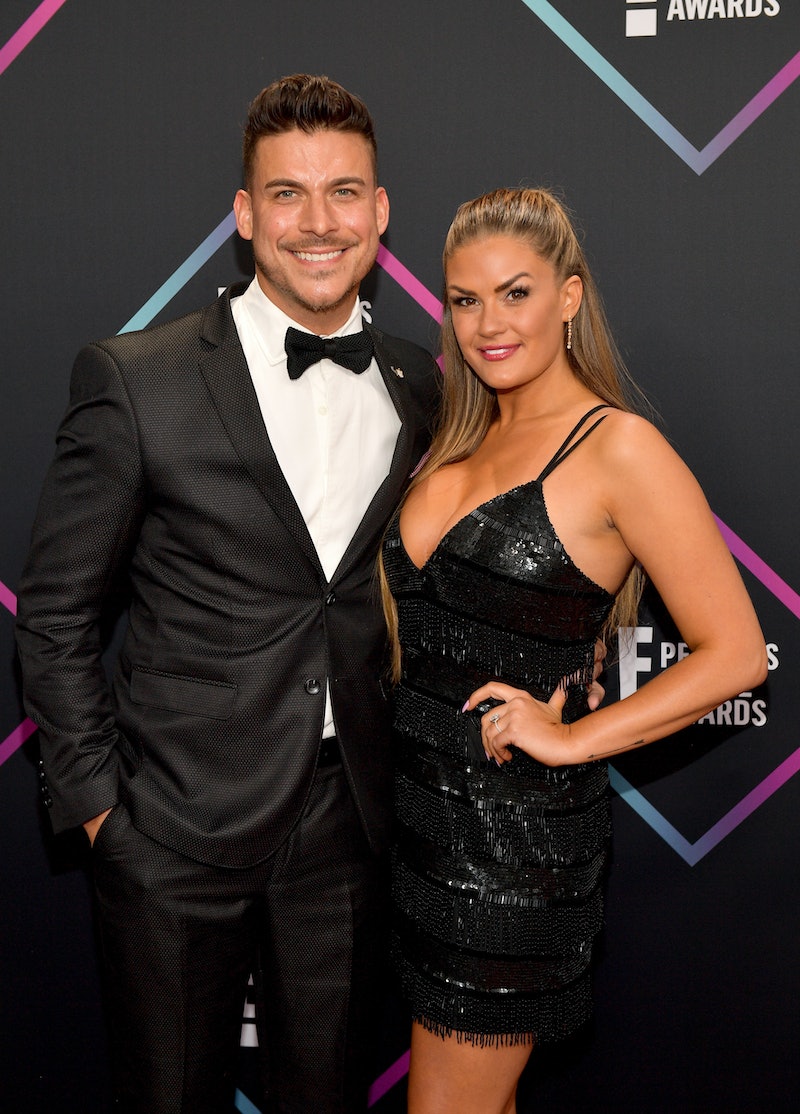 It's official, y'all. Get ready for Season 8 of Vanderpump Rules, because Jax Taylor and Brittany Cartwright got married with the Vanderpump Rules cast and other Bravolebrities in attendance. It's a Bravo fan's fairytale come true in more ways than one: the wedding took place in an actual castle in Kentucky. Southern Charm's Shep Rose posted videos of Jax and Brittany exchanging vows on his Instagram story and even captured their first kiss as husband and wife at the Kentucky Castle in Versailles, Kentucky.

As expected, there were plenty of Vanderpump Rules cast members there, since they make up the majority of the wedding party. Stassi Schroeder, Scheana Marie, Ariana Madix, Kristen Doute, and Lala Kent served as bridesmaids with Katie Maloney as the matron of honor. Peter Madrigal was a groomsman along with Tom Schwartz and Tom Sandoval, who were both the "best men" in the wedding, per Bravo's blog. At this moment, it's unclear if Stassi's boyfriend, and beloved Vanderpump Rules addition, Beau Clark had an official role in the wedding, but he was there and the life of the party, based on Instagram Stories. Lala's boyfriend Randall Emmett was also added to the wedding party, as he revealed on Instagram.

Being a groomsman is cool and all, but it seems like Randall actually fulfilled a more important role: savior of the wedding. He brought VIP guests Lisa Vanderpump and Ken Todd to Kentucky on his private jet. (If there was ever a reason to use a private jet, this was it.) She was the rumored wedding officiant, after all.

Lisa was in the United Kingdom after her mother passed away, and no one knew if she would be able to make it to the wedding. She did not end up officiating the ceremony, as many fans speculated, but her good friend and Jax's business partner, Lance Bass did.

The Vanderpump Rules cast aren't the only Bravo celebs in Kentucky for the wedding this weekend. Southern Charm cast member Shep Rose flew in from Charleston for the big day. The groom even posted a video to his Instagram Story of Shep and Scheana from the pre-wedding festivities. He captioned the video with "What is going on right now?"

Maybe they were just discussing some dance moves for the reception. In a June interview with People, Shep revealed, "Scheana texted me the other day, she’s like, 'Save me a dance at Jax’s wedding!' I was like, 'Okay.'"

In a recent interview with Us Weekly, Shep shared even more about his interactions with Scheana. He told the magazine, "I like Scheana … We went out and had a good time, and we may or may not have kissed." He also rated the kiss as "PG-13." Very interesting.

Former Summer House cast member Stephen McGee also shared photos from the pool party, including one with Brittany and her dog Kingsley.

Aside from the pre-wedding pool party, there was a party bus for the family and friends gathering the night before. Jax and Brittany even had a Taco Bell truck on hand, per their Instagram Stories.

As if getting married in an actual castle wasn't grand enough, the plethora of Bravolebrities, Taco Bell truck, beer cheese, and the other personal touches made this ideal wedding for Bravo viewers. Is it time for Season 8 yet? Jax got it Wright and fans are ready to watch these episodes.