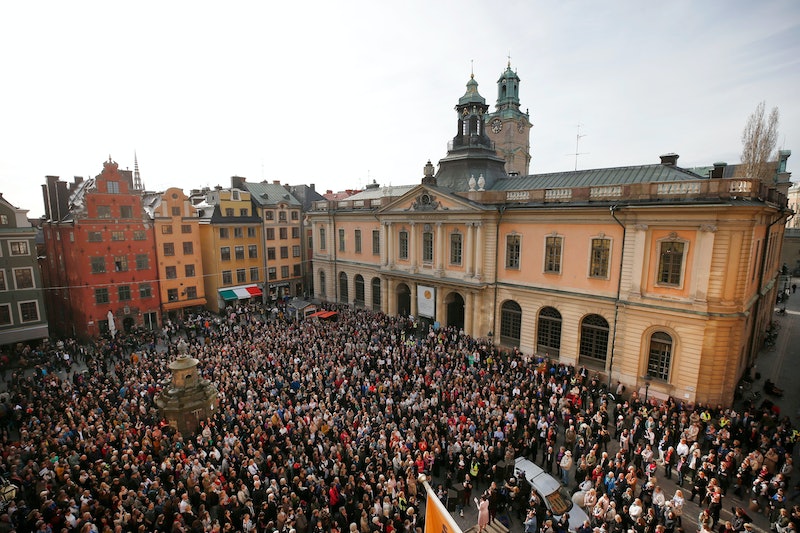 By now, you've probably heard that there won't be a Nobel Prize in Literature for 2018, and perhaps even 2019, because sheer chaos has torn apart the Swedish Academy in the wake of sexual harassment, assault, and rape accusations. Now, a prison sentence has been handed down in the Nobel Prize scandal.

The scandal began back in November, when 18 women accused Jean-Claude Arnault — the husband of Swedish Academy member Katarina Frostenson, who jokingly named himself the "19th member" of the prize-granting body — of sexual harassment, assault, and rape. The Swedish Academy's first female permanent secretary, Sara Danius, severed all of the group's ties with Arnault, and began an independent investigation into the academy's connections to his businesses. AP News reports that Arnault allegedly leaked the names of Nobel Prize winners in the past.

This week, Arnault was found guilty on one of two counts of rape. Seven of the eight women who came forward to bring formal charges against Arnault were unable to do so, due to either the statute of limitations or a lack of evidence. According to The Guardian, "The woman in the case that came to trial — a writer and academic — told police of the 2011 assaults a few days after the Dagens Nyheter report" — the original report containing accusations from 18 women — "was published, saying she had not come forward earlier because Arnault was a good friend of her manager." The prosecution called for Arnault to be sentenced to three years in prison, half of the maximum sentence for rape in Sweden. Arnault was given the mandatory minimum prison sentence of two years.

Sweden's poor handling of rape rivals that of the U.S. According to RAINN, 31 percent of sexual assaults and rapes in the U.S. are reported to authorities, compared with only 5-10 percent of cases in Sweden. And although the U.S. has an abysmal incarceration rate for rapists, at just 0.006 percent, information on Sweden's conviction and incarceration rates does not exist. According to a 2008 report from Amnesty International, "no [Swedish] authority appears to have information on the proportion of reported rapes that eventually lead to a conviction in a district court, a court of appeal or in rare cases in the Supreme Court. Amnesty International Sweden considers this to be a serious shortcoming that makes it impossible to follow the progress of a rape case through the entire legal process. Efforts to harmonise the statistics from the different authorities to allow for comparisons are underway, but this work will take years to complete."

Arnault's conviction and sentencing are a win for Swedish feminists and the global #MeToo movement, but the Swedish Academy's attempt to reckon with the charges brought against its patron caused a lot of turmoil. Part of Danius' plan to cut ties with Arnault included forcing Frostenson to vacate her seat, and three members departed in protest when a vote decided against removing Arnault's wife from the academy. Both Frostenson and Danius stepped down shortly thereafter.

Those departures left the Swedish Academy with only 10 active participants, fewer than the 12 required to elect new members. Because members receive lifetime appointments to the academy, there is no protocol in place to allow active voters to replace inactive ones who are still living. Founded in 1786, the Swedish Academy appeared doomed to die with its 10 remaining members, barring outside interference. In April, King Carl XVI Gustav agreed to help keep the academy running.

The news of Arnault's sentencing comes as the Nobel Foundation begins to announce the winners of the other 2018 Nobel Prizes.