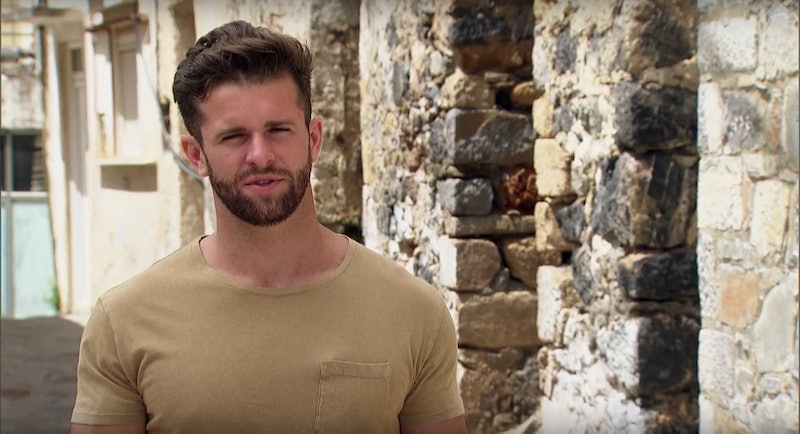 Now that there are only three men left on Hannah's season of The Bachelorette — and Luke P. is finally gone for good — it's time for her to make some big decisions. She seems to have strong connections with all of the remaining guys, but amid all of the drama over the last few weeks, Jed has become a clearer and clearer frontrunner. Still, for all the signs that he might get that final rose, there are also plenty of clues that Jed doesn't win The Bachelorette.

As you might remember, things with Jed started out kind of rocky. Earlier in the season, he told Hannah that he initially applied to the show in order to get a platform for his music career, and that he wasn't necessarily looking for love. It was a classic case of someone being there "for the wrong reasons," and it was sort of startling that he was so forthcoming about it. But he reassured Hannah that after getting to know her, he was genuinely falling for her, and she appreciated his honesty enough to keep him around.

Still, Jed hasn't exactly stopped showcasing his music, and fans aren't completely convinced that his intentions are as genuine as he says they are.

If Hannah picks up on that and starts suspecting his feelings may not be stronger than his desire to kick-start his career, that could spell trouble.

Another development that makes Hannah and Jed's future look pretty dicey is the fact that his family seemed very unenthusiastic about their relationship. Jed's hometown date was awkward — his sister told Hannah that Jed falling in love with her wasn't a good thing, and his mother seemed to suggest his music would take priority over starting a future with someone. The whole visit was uncomfortable.

More recently, Jed and Hannah got into argument about the fact that she refused to send Luke P. home. That may resolve itself now that Luke is gone, but it wasn't great that Jed was questioning Hannah's judgment and not trusting her decisions.

There's also yet another sticky situation the two will have to face at some point if their relationship persists: Last month, Jed's ex-girlfriend claimed to People that they were still in a relationship when he went on the show. Jed hasn't returned Bustle's request for comment regarding the accusations, but he did vaguely allude to the situation in an Instagram post earlier this month. He wrote that he couldn't share his side of the story right now, but that when he can, he will, and asked everyone to be patient until that time comes.

Whatever his explanation, this could definitely affect Hannah's relationship with Jed, wherever it stands now. But given that this all came out after filming had wrapped, it's unclear if she was aware of the situation before handing out her final rose.

With all that in mind, Jed's Bachelorette experience could end in a couple of different ways. Hopefully, this week's two-night finale will answer any remaining questions.