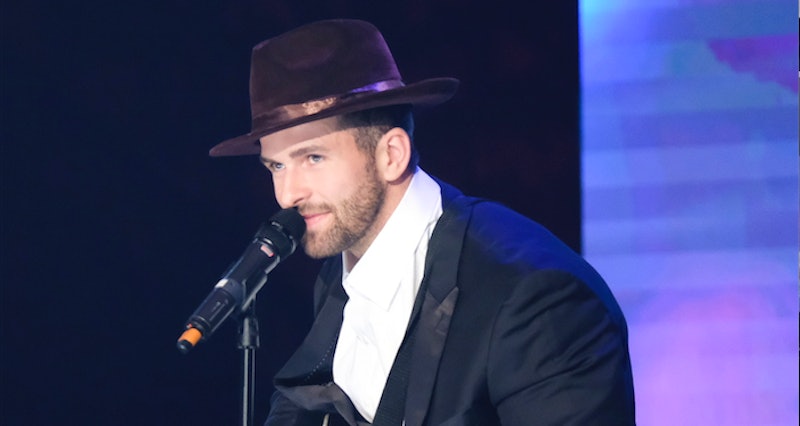 If you're itching to learn more about the guy who pulled out a guitar and sang a dreamy tune last week on The Bachelorette, you're not alone. His name is Jed Wyatt, and he's a Nashville-based singer/songwriter — which he didn't waste any time in letting everyone know. According to his ABC bio, he grew up in the same area as Dolly Parton, and he can apparently rap Nicki Minaj's verse in "Bottoms Up" "flawlessly." So, naturally, Jed's Instagram is filled with performance photos.

However, there's also a lot more to learn about the 25-year-old Bachelorette contestant. Jed's ABC bio is almost entirely focused on the fact that he's a musician, though it does say he's "adventurous," looking for "a forever type of love," and can "shoot a rubber band with freakish accuracy." That's all fine and good, but obviously, we want to know more! Luckily for us, not only is Jed's Instagram page public — which can't be said for some of the other guys — but he's a very, very avid user. He's got a whopping 560 posts and already has more than 33,000 followers, so there's a lot of information to be gleaned. Let's see what we can learn about Jed from his photos.

He Has A Dog Named Basil

This is obviously the most swoonworthy thing about Jed, serenading skills be damned.

And Apparently A Cat, Too!

This cat looks pretty uncomfortable, but nonetheless, Hannah will have no shortage of pets if she and Jed work out.

He Might Just Pick Up Whatever Dog He Finds

Jed seems dedicated to holding every animal he possibly can, and honestly, that earns him points.

This isn't exactly surprising for The Bachelorette, which seems to attract every personal trainer in the country, but since it is a big part of Jed's life, it's worth noting.

There are plenty of photos of Jed performing in venues throughout Nashville on his feed. Some of his captions say he wants to sell out arenas one day — surely, a little Bachelorette exposure will help get him closer to that goal.

He Plays Piano, Too

Apparently, Jed is a man of many talents. Is there a piano in the Bachelorette mansion for him to pluck away at?

Family Is Important To Him

Jed shared a super cute photo of him and his mom for Mother's Day, and also posted a sweet message to his dad on his birthday. Perhaps we'll see these two on a hometown date later this season.

Or at leasts poses with them for photos.

According to his caption, Jed was a groomsman last year in a friend's wedding. Will the next one he attends be his and Hannah's?

It's still too early to tell who Hannah's frontrunners are, but Jed certainly seems like a Southern charmer capable of stealing her heart. You might want to hit that follow button.