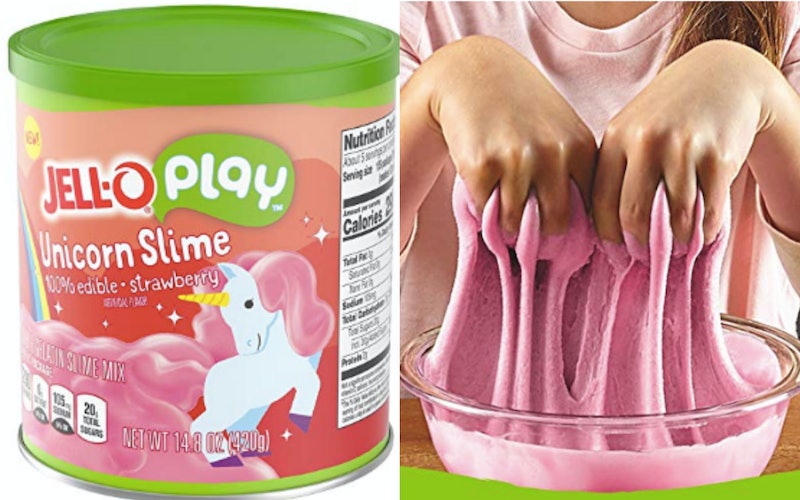 Slime is a hot commodity these days, but there’s one thing you can’t usually do with it: Eat it. Thanks to the brand new JELL-O PLAY Edible Slime, though, slime you're not allowed to eat — no matter how appealing it might look — is now a thing of the past. Available for pre-order at Amazon now and available starting in December, Edible Slime might just be the de-stressing tool you didn’t even know you needed this winter — even if it’s technically geared towards kids and families. (As JELL-O PLAY Senior Associate Brand Manager Michael Hartley put it in a press release, “JELL-O PLAY is all about encouraging and enabling bonding time between parents and kids. With new JELL-O PLAY Edible Slime, the entire family can have fun creating, stretching, and even eating slime.”)

Am I a childless 30-something and therefore definitely not the target audience for edible slime? Yes. Am I tempted to get it anyway? Absolutely.

Slime you’re meant to play with is far from a new invention, of course. Many people who grew up during the ‘90s associate it closely with Nickelodeon; beyond the green stuff we often saw cascading down upon the heads of unsuspecting game show contestants on TV, GAK occupied a specific space in our free time dedicated to fart noises and squishing sensations. More recently, homemade slime has become both a lucrative cottage industry and a social media phenomenon. Paper Magazine traces today’s trend to a group of teenagers in Thailand who became the first of the slime YouTubers in 2016; in the two years since, other YouTube channels, Instagram pages, and Etsy shops devoted to slime have allowed the stuff to proliferate across the internet in sticky, squishy waves.

Typically, today’s slime is made primarily from white school glue and sodium borate (AKA Borax). Adding in other ingredients such as food coloring or cornstarch can change everything from the color to the texture of the stuff. Obviously, you wouldn’t want to eat it, though — which is where the JELL-O version comes in.

Part of the JELL-O PLAY line — a kid-centric collection of JELL-O products released during the summer of 2018 that literally encourages you to play with your food — JELL-O Play Edible Slime arrives as a powdered mix housed in a canister. Combining a couple of scoops of the powder with warm water and stirring it for 30 seconds turns it into the slime it always knew it could be — and also helps it retain the same DIY-made-easy quality that makes regular Jell-O and Jell-O instant pudding so appealing. Once the slime comes together, you can squish it, squash it, pull it, and play with it the same way you might with traditional slime; the difference is that you can eat this stuff when you’re done with it if you like. (For the curious, JELL-O PLAY Edible Slime mostly consists of modified food starch, sugar, and gelatin.)

Two varieties are currently available for pre-order: Unicorn Slime and Monster Slime. The Unicorn stuff is pink and flavored with strawberry; the Monster version, meanwhile, is green and tastes like lime. Each canister of Edible Slime powder makes two batches of slime; they’re just shy of $10 per canister on Amazon.

JELL-O PLAY, of course, is just the latest iteration of what kids have been doing with gelatin-based desserts for decades: Playing with it. The first real JELL-O-based novelty hit the scene in 1969; called JELL-O 1-2-3, the mix separated out into three layers once prepared in a way that seemed almost like magic. Frozen JELL-O Pops arrived in the mid-‘80s, putting a cool summertime twist on the dessert — and then, in 1990, the recipe for JELL-O Jigglers, which used cookie cutters to shape sheets of JELL-O into objects as fun to play with as they were to eat, became the centerpiece of a massive ad campaign.

In some ways, JELL-O-based slime is sort of like the opposite of JELL-O Jigglers: Whereas Jigglers are defined by their shapes, Edible Slime is defined by its shapelessness. Then again, though, maybe they’re more like two sides of the same coin. After all, they’re both meant to be played with and eaten, right?

JELL-O Edible Slime can be pre-ordered on Amazon now; it will be released in December. Nab it here and here. Happy sliming!