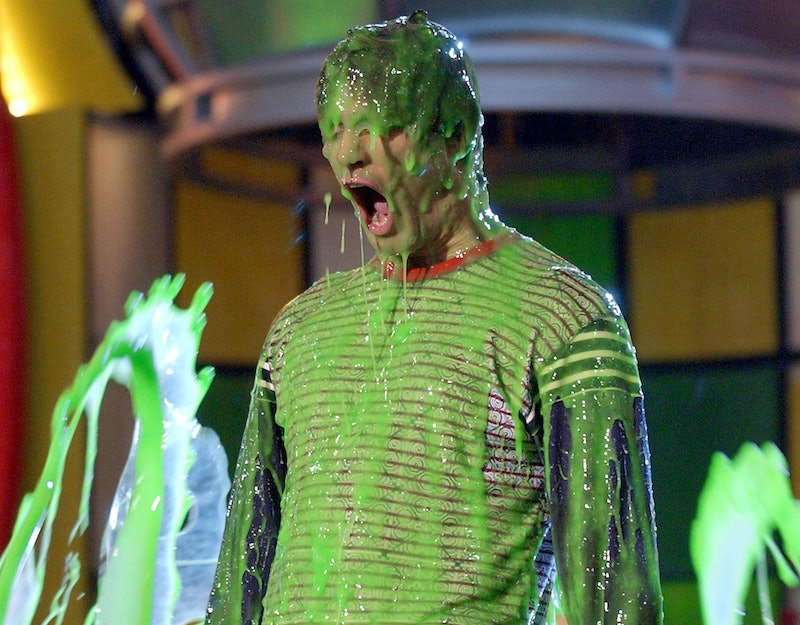 I often think kids are embodied in a way that adults simply aren’t — by which I mean they engage all five of their senses as frequently and fully as possible, running toward every new experience with arms (and eyes, and ears, and mouths, and noses) wide open. As such, it’s probably not a surprise that most kids who grew up when I did remember the best tactile sensations of the ‘90s with great fondness. Were they messy? Yes. But were they awesome? Also yes — even if we’d consider them “gross” now.

I’ll admit that I struggled a little bit to classify this particular sense. Unlike some of the other sensory memories I’ve dredged up lately, the “Best [Sense] Of The ‘90s" format didn’t make as much sense here; whereas “Best Smells Of The ‘90s” and “Best Sounds Of The ‘90s” work, grammatically speaking, “Best Touches Of The ‘90s” or “Best Feelings Of The ‘90s” sound kind of… odd. I also found “Things All ‘90s Kids Loved To Touch” to be similarly disconcerting.

So I went the technical route: “The Best Tactile Sensations Of The ‘90s.” Did I overthink it? Maybe. Then again, though, I think word choice is important (I mean, I deal with words for a living, so this shouldn’t really be a surprise), and “tactile sensation” describes exactly what I mean.

But you know what gets my point across even better than words? Sense memories. Remember how these 15 ‘90s things felt when you squished them? That’s what I’m talking about.

1. Biting Into A Gusher

The squash of the fruit snack, followed by the flood of goo. It sounds naughty, but you know what I mean.

Of course. But also…

I actually think Floam was rather underrated. It may never have achieved the same fame as its slimier cousin, but there was something enormously satisfying about yanking little bits of it off and them squishing them back together again.

Naturistics’ lip balms and glosses had a texture unlike any other — more unique, even, that good ol’ Lip Smackers. I remember Sweet Lips (the tubed variety) and Glossy Lip Balm (the one in the pot) being thick and goopy, while the Roll-On Lip Gloss (which dispensed via a roller ball) was a thinner liquid. All of them tasted and smelled incredibly sweet.

It’s an incredibly unique sensation. Nothing else feels quite the same way a Koosh ball does.

Who knew that wax-covered string could be so much fun? I used to keep a whole bunch of these things plastered to the back of my bedroom door; that way I could rearrange them and design new images whenever the heck I felt like it. It should be unsurprising that I later grew into the kind of adult who keeps Magnetic Poetry on the fridge at all times.

Honestly I’m still not totally sure what troll hair is made out of. I assume it’s plastic, not unlike Barbie hair or the mane and tail hair of a My Little Pony… but you never know.

Or Sculpey — either/or. Obviously polymer clay had been around long before the ‘90s; Sculpey was created in the 1960s, while Fimo dates back to the 1930s. (The original idea was for it to be a replacement for Bakelite.) It really hit its stride during the ‘90s, though — making little sculptures and complicated millefiori beads out of the stuff was a favorite hobby of many a ‘90s kid, myself included. As such, I will always have a fondness for the feel of that particular type of clay — smooth and not terribly sticky, and lots of fun to squish.

I actually can’t vouch for this one, as I never experienced getting slimed on live television. I would imagine, though, that it would be awesome. Gross, but also awesome. Because slime.

10. An Unused Sheet Of Stick-On Earrings

The way they bubbled up from the paper just felt cool.

You know, the one that used to be white but has now turned a strange shade of yellow. Whatever computers and computer accessories are made of these days, it’s not the same stuff they were made of in the ‘90s. They don’t have that solid, yet weirdly prickly feel to them — everything is all smoothed out and streamlined now.

Sure, they’d get uncomfortable in about half an hour — but the first few minutes after you slipped on a brand new pair of jellies were the best.

Were they ill-advised fashion statements? Perhaps. Were they bizarrely fascinating because of their unique texture? You bet.

Naturally. I actually think the feel of the toy may have been the main draw: The beans gave them a satisfying heft. There was something weirdly enjoyable about squishing a bean bag with a face.