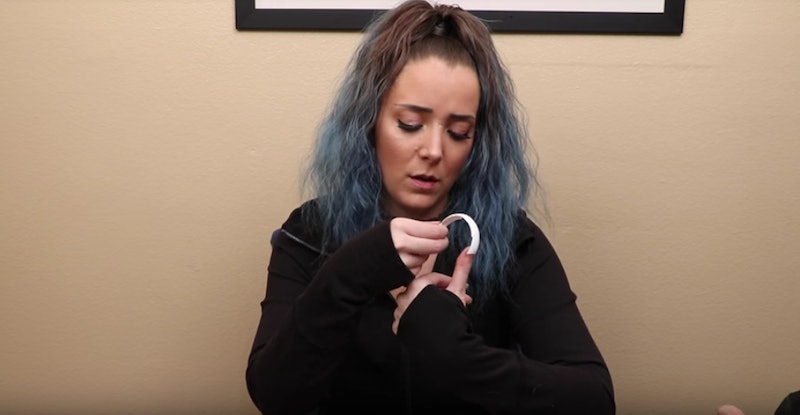 The internet can be a very scary place. One minute you're uncovering a helpful DIY and the next you find yourself down a rabbit hole, watching one super strange challenge after another. It's videos like Jenna Marbles gluing 200 fake nails to her nail that make you question surfing the web in the first place.

Of all the shocking things you can find online — from oozing pimple extractions to gory injury compilations — beauty challenges have got to be some of the most disturbing videos to surface. The internet seems to be obsessed with excessively using beauty products and while it's entertainment at its purest form, it really makes zero sense. There were cringeworthy experiments like the 100 layers of liquid lipstick and full face using only highlighter challenges that had beauty enthusiasts layering on product by the boatload. Now, Jenna Marbles is bringing to light an experiment that makes the creepy 100 coats of nail polish challenge look like child's play.

Investing in 400 acrylic nails, Marbles decided to test her extremities like never before. After receiving inspiration from another Twitter user that got creative with fake nails, Marbles took to YouTube to take her subscribers on one hilarious, but horrifying ride.

When Kailyn Nuse mentioned Jenna Marbles on Twitter, it would be the start of an insane nail challenge. The Twitter user had glued way too many fake enhancements onto her nail, making for a slinky-like monstrosity hanging from her thumb.

Naturally, Marbles had to try it out for herself, as the queen of experiments always does.

The process of layering on the acrylics wasn't without its challenges. It was quite the struggle for Marble to figure out how to best secure the enhancements, make them curl, and keep the structure from falling apart. She even broke out a hot glue gun at one point, so this wasn't a walk in the park.

"Some people in life become doctors and lawyers, and other people push the boundaries of nails and nail glue. I'm an artist," Marbles joked once the experiment was complete.

There's no way you could get through the video without crying from laughter. As cringe-worthy as the entire experiment is, it's super entertaining to watch. Marbles' final result is almost too painful to look at, as she seemed to surpass Nuse's onion ring, water slide, slinky-esque nail contraption by using nearly 200 acrylic pieces.

"Was this necessary? No. Did I need to do this? No. Does anyone ever need to do this? No, but i just wanted to see what would happen because I was inspired from Kaylin on Twitter," mentioned Marbles, suggesting the challenge was all fun and games.

As unnecessary as the video was, it's clearly what Marbles' fans have been waiting for. Even before they had seen the video, many just knew it was going to be entertaining AF.

Of course, it wasn't everyone's cup of tea.

Many wondered how much Marbles' poor nails suffered. But naysayers aside, the overwhelming majority seemed to be impressed with Marble.

After all, she and her boyfriend had gone to extreme lengths to put the durability of the slinky nails to the test.

Still, the experiment was a success, not to mention far too hilarious.

Whether you hate it or love it, you've got to give it up to Marbles for her willingness to try any and everything.

The YouTube sensation doesn't have nearly 18 million subscribers for no reason. Clearly, this is the content her fans want to see, no matter how excruciating things get.