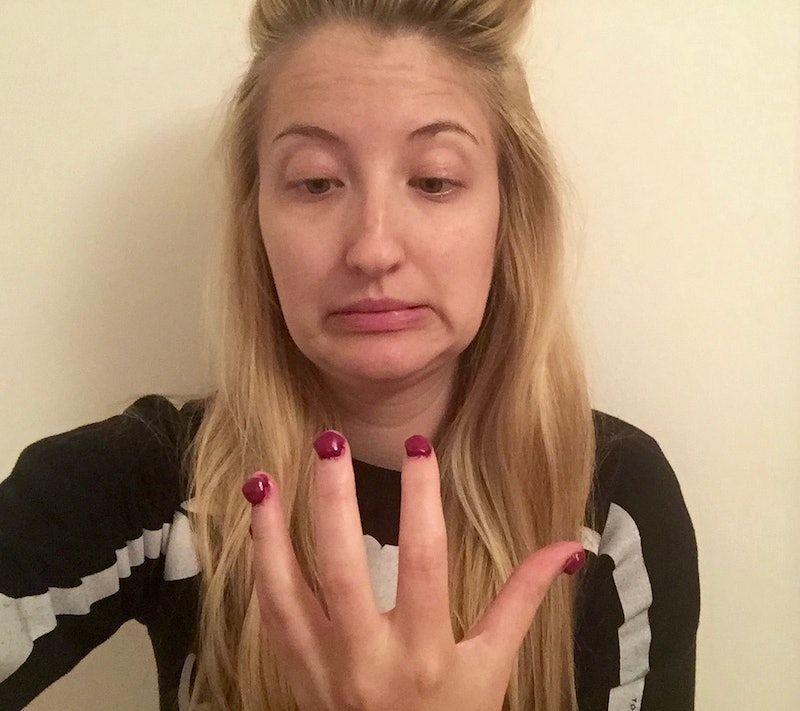 After discovering folks on YouTube completing the various #100coats challenges, I fancied myself a bit of the action. So as a newbie to the whole viral challenge field, I attempted one that I assumed would be particularly difficult to fail: the 100 coats of nail polish challenge.

Although I enjoy makeup and beauty, I doubt I'll ever be one of those girls who can achieve perfect winged eyeliner on the first try, or apply false eyelashes without a hitch. Thus, instead of picking a challenge like the 100 coats of liquid lipstick challenge, I chose something I believed I couldn't mess up. Plus, the 100 layers of mascara challenge looked terrifying and made me worry about the fate of my already sparse eyelashes!

If you have no idea what the #100coats or #100layers challenges are, they're pretty self-explanatory: You apply a hundred layers of something, be it fake tan, face mask, or lipstick, and you document the results. It sounds totally bizarre, but the viral videos are so intriguing and I found myself unable to tear my eyes away. The only problem with these vids is, if you want to see the entire thing, you have to sit through the whole process or skip forward and risk missing a landmark moment. So, in order to give you curious beauty babes what you desire as quickly as possible, I tried the 100 coats of nail polish challenge and documented my key moments.

My main source of inspiration was Cristine of Simply Nailogical, who created a YouTube video documenting her applying 100+ coats of nail polish, which she aptly labelled "#polishmountain," presumably because of the sheer heights her nails reached at the end.

I also planned on using a variety of different nail polishes so that the results would be clearer to see. I also ate and visited the bathroom before beginning, because I heard these challenges took quite some time. I documented the entire process with my iPhone camera and I had a hairdryer handy for what I assumed would be quicker drying.

After applying my first coat of nail polish, I was already excited to reach the end. I knew from watching Cristine's video, that I'd have to wait for each layer to dry in-between, before applying the next coat. I had butterflies in my tummy at the prospect of the end result and I was generally excited about the entire process.

But, when it came to the second coat, my butterflies died down a little. I like to think of myself as a fairly patient person, but I knew I had ninety-eight coats to go and I didn't dare attempt to estimate how long the whole experiment would take, bearing in mind I had to wait for each layer to dry. So, I decided to take matters into my own hands and use a hairdryer in an effort to dry the polish quicker.

This was a HUGE mistake. My hairdryer only has "hot" settings and after a short while of blasting my wet nail polish with heat, I came to the conclusion that it was actually making it melt and the heat was slowing down the drying process. After Googling "How to dry nails fast," I stumbled across the ice water method, that uses the power of cold temperatures to set polish in place. In order to obtain icy water, I obviously needed ice cubes and a bowl of water. As I didn't have any ice cubes and the stores had closed, I had to make do with popsicles instead.

I waited until the popsicles had lowered the temperature of the water and I submerged my fingers into the bowl.

It's safe to say, I felt rather silly submerging my newly painted fingers into a bowl of popsicle water, but it did seem to help dry my nails more quickly. I continued doing this between each layer and carefully patted my fingers dry with a towel before applying the next layer.

I had never felt so frustrated about nail polish drying until embarking on this challenge, however when I got to the 10 coats mark, my positivity was replenished. I could start to see that my hard work was, slowly but surely, paying off.

My nails were beginning to resemble a zombie Halloween manicure, but I didn't mind, because I was determined to reach one hundred coats of nail polish! Somewhere in between 10 and 20 coats, I figured out which nail polishes were the fastest-drying. Up to this point, I had been using a different polish for each layer and with twenty-five different polishes at my disposal, I planned to use each one four times in a cycle. However, at 14 coats and two-and-a-half hours in, I realized I needed to change my method or I'd be doing it all night.

So, I started using the same two polishes that seemed to be the fastest-drying, and I ditched the ice water method, because the drying process was slowing me down. I also began timing the drying process so that I could make the entire experiment more time efficient. I started with my phone alarm being set at two minute intervals from the moment I'd applied a new layer. But, this wasn't enough time for the polish to dry, so I extended my timer to three minutes.

Even with my more efficient process, I knew it was going to be a very long night.

When it came to 20 coats, my enthusiasm was reinvigorated! The fruits of my labor were clear to see, although I was beginning to feel super weird like I was in another dimension — I blamed this on the fumes and the fact it was getting pretty late.

As I was approaching 30 coats, I started to feel like my hand looked like a monstrous creature claw, and I found this oddly amusing. I showed my fiancé my work in progress and he told me it looked like I'd trapped my hand in a door and my nails were coming off.

At 35 coats I was desperate to visit the bathroom, I'd been trying to put it off for as long as possible. Unfortunately, on my trip I had a slight mishap where I managed to squish the polish on my thumb nail. I use the term "squish" because the layers hadn't dried hard and I realized my nail polish was actually super fragile. I could however, carefully mould the nail polish back into a shape that I could work with.

This was the problem with this experiment — doing anything aside from the experiment was difficult. I hadn't eaten or been to the bathroom in hours and my alarm (set at three minute intervals) was driving me crazy. But, I pushed on!

Somewhere between 45 and 50 coats, I'd managed to re-heat my pre-prepared dinner in the microwave and eat it one-handed. I was SO thankful I could do this. But, as time went on and my eyelids became droopier, I realized it was very late.

In between my keeping a tally of my coats, applying layers, and dealing with my alarm, I peeped at the time — I had entered the wee hours of the morning. I felt like I was on another planet; one where my hand was being affected by the atmosphere and was morphing into an alien mitt.

I felt I couldn't properly relax (and hadn't been able to for hours) due to my alarm sounding every three minutes. It was like I was enduring some kind of archaic torture method for a modern age.

So, at over six-and-a-half hours in and at 50 coats of nail polish, I threw in the towel. I was very proud of my "achievement" in creating these freakish nails, but I just couldn't bear the thought of another alarm going off. Although I was disappointed that I'd only made it halfway, I'd reached my limit.

I soon discovered that removing the polish was much easier than applying it had been. In one swoop of a popsicle stick, I managed to reveal my bare nail underneath the 50 coats of nail polish.

Even though the results were pretty gross, I found myself fascinated at the weird, gloopy globs that I'd created.

I was particularly proud of my ring finger nail polish, and I was a little reluctant to remove it. But, my bed was calling me incessantly and I had to give in.

After my hours of hard work and being haunted by an unrelenting alarm, I was left with five messy blobs. It felt like a huge anti-climax, but I was so relieved to have my hand back in working order again.

What Did I Make Of The #100coats Challenge?

It's totally fun to watch other people doing these weird challenges in cyberspace, but I wouldn't recommend anybody do them IRL. Although some parts of it were fun, I lost approximately six to seven precious hours of my life that I will never get back. Sure, there was something strangely satisfying about removing 50 layers of nail polish from my nails, but it definitely wasn't worth the amount of time I put into achieving those layers.

The moral of the story? If you have multiple hours to waste, your curiosity and sense of achievement will probably be fulfilled by completing a challenge like this. In the future, I'll happily refrain from doing things like this myself, and watch it on the internet instead.