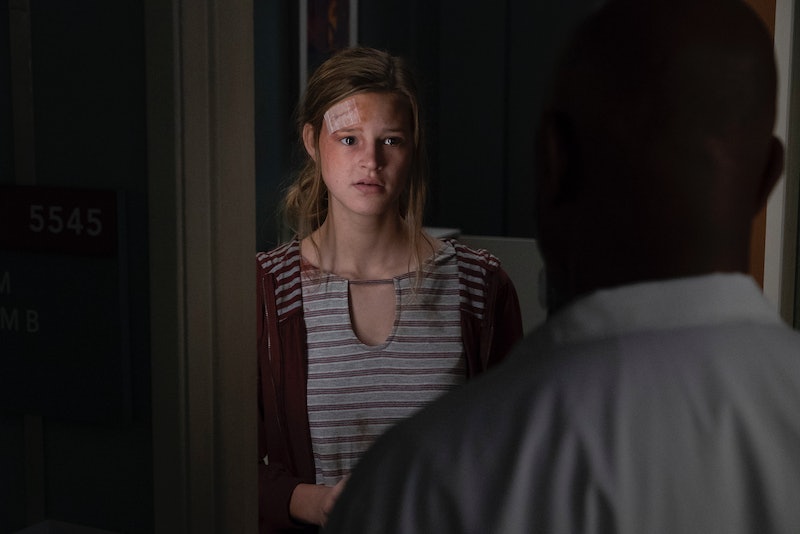 Fans of iconic 1980s movies may have noticed that another Grey recently joined the cast of Grey’s Anatomy — Jennifer Grey, that is, star of such films as Ferris Bueller’s Day Off and a little film called Dirty Dancing. Grey appeared on Grey’s Anatomy as Carol Dickinson, aka Betty’s mother. Well, her name’s not exactly Betty (more on that later). And because of all of Betty’s mystery, Jennifer Grey’s Grey’s Anatomy character isn’t going away any time soon.

TVLine reported back in December 2018 that Grey had joined the show for a “multi-episode mid-season arc,” with no exact information on whom the Dirty Dancing alum would be playing or for how many episodes she’d be doing it. TVLine interestingly points out that it’s almost a decade after Grey won Dancing With The Stars Season 11, so maybe she was just really aching for a chance to come back to ABC.

Another fun fact? Grey’s father, Joel Grey, has also appeared on Grey’s Anatomy — in Season 6, he played the old science teacher that Izzie helps escape from a nursing home. Ah, to be young and in Season 6 of Grey’s Anatomy again. But we’re older, wiser, and with just as many superfluous characters, and Grey is here for one thing and one thing only — to get her daughter back.

By the way, Betty, the addict baby mama that’s been staying with Owen and Amelia? Well, her name is Brittany Dickinson (but uh, I’m gonna call her Betty), and her parents have no idea she has a baby. They also don’t know where she’s been for the past few months. When Amelia and Owen would talk to the “Nelson” family, aka Betty’s parents, it was just a friend of Betty’s posing as them. This situation is about to get immensely complicated, don’t you think? What Carol Dickinson and her husband do know is that their daughter is a drug addict, and even though they did everything they could do to stop it, it wasn’t enough.

Betty’s parent’s presence on the show opens up the possibilities that Leo, Betty’s son, will get taken away from Owen and Amelia, because they are his grandparents and they are the next of kin. There’s nothing that Owen and Amelia can do about that.

Previews for the next episode of Grey’s Anatomy show Betty in some sort of medical emergency (probably an overdose, if we’re being real here), so given that and the fact that custody of Leo needs to be hashed out, the Dickinsons should book one of those extended-stay hotels for their time in Seattle.

What comes next for Betty and her family? It’s hard to tell, because even though Owen is in the wrong (as he is with, uh, everything he’s ever done over the course of his time on the show), we all know that Owen is going to fight like hell to keep Leo in his custody. Betty has spoken about how she doesn’t want to be mom and she’s not equipped to be a mom, but Betty’s parents obviously love her and want what’s best for her and Leo. They’re not going away without a fight, so Grey’s Anatomy viewers will be seeing plenty of more of Jennifer Grey in the coming weeks.