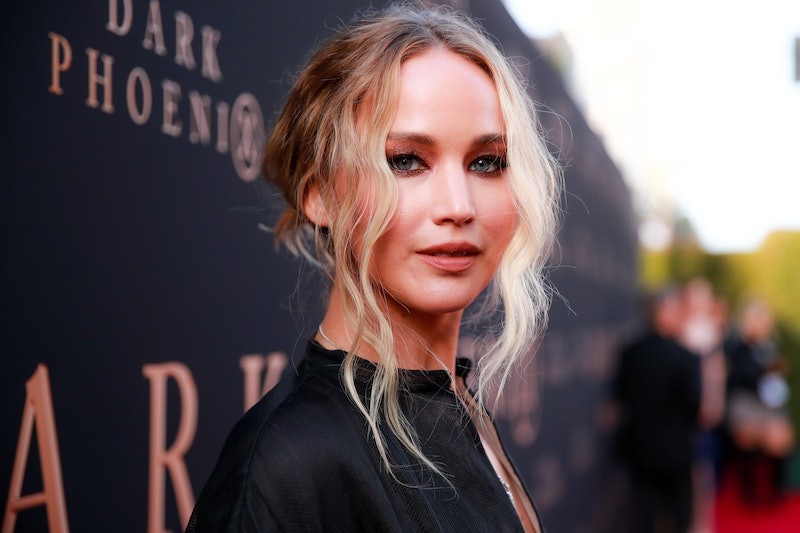 Surprise! Jennifer Lawrence got married. In case you didn't know, Lawrence married partner Cooke Maroney on Oct. 19 in Rhode Island. The ceremony may have had A-list guests, but the event has been kept under wraps with no photos emerging until now. Fans got their first look at Jennifer Lawrence's wedding dress on Oct. 22, and there were a lot of sparkles.

According to a source for People, Lawrence's wedding dress was designed by French fashion house Dior, which makes total sense. Lawrence is currently the face of the brand's perfume, Joy. The magazine reports the Dior team flew in for the East Coast soirée and even used an entire hotel room to house the mysterious wedding gown. As for the design, People's sources also reported that the dress was jeweled, and based on the first photos of Lawrence from the big day, that seems to be spot on.

The first image of the bride has emerged, and while not exactly in great quality (and not of the whole gown), the photo gives fans of the actor a sense of what the dress may have looked like.

You can see the image of Lawrence's dress here at Elle UK.

In the image, Lawrence's dress appears to feature a glittering crew neck and sheer, sparkling fabric that moves from the embellished neckline into slightly puffed sleeves. As for her beauty look, there's not much visible of her makeup, but her hair looks to have been curled and pulled away from her face in an updo with curls dropping down to frame her face.

Lawrence's nuptials are the second high-profile celebrity wedding this fall. In late September, Hailey Baldwin and Justin Bieber tied the knot in a South Carolina ceremony. While fans have only gotten a glimpse at Lawrence's look, Baldwin admirers got a plethora of bridal fashions both before and after the big day.

For her wedding, though, Baldwin (now Bieber on Instagram) had not one, but two bridal gowns and showcased them both on social media. The first, used for her ceremony, was an off-the-shoulder, fitted lace design by Virgil Abloh of Off-White while the second gown for the reception featured major Meghan Markle vibes with a high halter neck and open back.

Unfortunately, Lawrence has no social media to check incessantly for a peek at her dress. Fans will just have to wait until she releases images, if she chooses to do so at all.

More like this
This 'One Tree Hill' Wardrobe Error Is Going Viral On TikTok
By Brad Witter
Hailey Bieber Looks Just Like Princess Diana & I Need To Copy Her ASAP
By Sophie McEvoy
30 Of Kendall Jenner’s Best Runway Looks To Date
By Dominique Norman
Rita Ora Joined The Cut-Out Trend With These Bejewelled Butterfly Trousers
By El Hunt
Get Even More From Bustle — Sign Up For The Newsletter
From hair trends to relationship advice, our daily newsletter has everything you need to sound like a person who’s on TikTok, even if you aren’t.