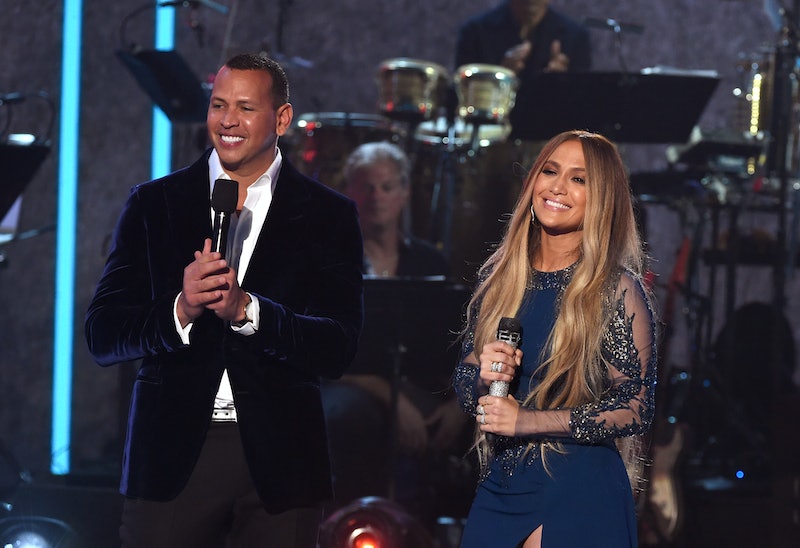 He is one of the greatest baseball players of all time. She is a legendary triple threat whose latest acting role is generating Oscar buzz. By their powers combined, they are celebrity couple gold. Alex Rodriguez and Jennifer Lopez's best couple moments not only definitively prove these two are perfect for each other, but are also a fun look at the two years and seven months they have been an item. Lopez and Rodriguez started dating in early 2017, and they've been sharing snippets of their relationship in Instagram posts, public appearances, and YouTube videos ever since.

Lopez and Rodriguez have charmed fans in many of those public appearances, from the Met Gala to the MTV VMAs. They even shared a Vanity Fair cover story together in October 2017, in which they talked about how they first met and how they met at the right time in their respective personal lives. In honor of Hustlers, which hits theaters on Friday, Sept. 13, it's time to revisit some of J-Rod's greatest couple moments so far. In the clips and pictures below, J. Lo and A-Rod support each other, crack each other up, and knock the relationship ball out of the park.

On a 2018 episode of Ellen, J. Lo told Ellen Degeneres about the time A-Rod excused himself to go to the restroom in the middle of their first date so he could text her. As he was walking back to the table, J. Lo realized she had a new message from A-Rod. "I look down [at my phone] and he goes, 'You look sexy AF,'" she recalled. "And I was like, 'OK?'"

2. Their First Met Gala As A Couple

In May 2017, A-Rod and J. Lo went to the Met Ball together. J. Lo wore an ethereal robin's egg blue gown, and A-Rod wore Tom Ford. Before it was time to hit the Met Gala steps as a couple for the very first time, J. Lo took a selfie with A-Rod in their limo. They've gone to every Met Ball together since.

On Feb. 3, 2018, J. Lo took a moment before it was time to sing her song "Us" at her Super Bowl weekend concert to wish A-Rod a happy first anniversary. According to E! News, she said, "We've been together for one year today. I don't want to get all mushy or anything, but baby, this song's for you. I love you."

In this video, J.Lo delivers a monologue about Moneyball, Billy Beane, and sabermetrics in front of a white board. Throughout the clip, there are snippets of A-Rod on Fox's MLB show, delivering a similar speech. At the end of her explanation, J. Lo turns to the camera and says, "And that's what you want to say, baby."

Last August, A-Rod and J. Lo took a trip to Italy. While they were on this vacation, they went to a bar where a live band was playing music. At one point that evening, J. Lo climbed on a table and sang "Let's Get Loud" with the band. A-Rod recorded her performance and his reaction.

In 2018, J. Lo was the recipient of the MTV Video Vanguard award. She brought A-Rod as her date, and if there was a 2018 MTV Red Carpet Vanguard award, it would be all his. A-Rod's commitment to documenting the evening with his cell phone is next level, and the moment promptly went viral.

7. A-Rod Was All About The Audience Participation At The VMAs

Before it was time to accept the golden moon person statuette, J. Lo blessed the audience with an electric medley of her biggest hits. The camera cut to A-Rod watching from the crowd multiple times, and J. Lo’s beau’s reactions never disappointed. Like the red carpet photos from that evening, the shot of A-Rod proudly filming J. Lo's performance from his seat was meme-worthy.

On March 9, 2019, Rodriguez proposed to Lopez. She said yes, they posted about it on Instagram, and the world gasped at the breadbox-sized diamond on her ring finger. They have not announced a wedding date, but in the Making The It's My Party Tour: Showtime! video that went up on J. Lo's YouTube channel in June, she revealed she and A-Rod plan on tying the knot "soon, not soon-soon but next year."

When J. Lo was feeling low after one of her performances back in July, A-Rod intercepted after the concert for a pep talk, and you can see the moment in her It’s My Party Tour Diary: Volume One video. Later that month, she told Entertainment Tonight that A-Rod “was the MVP" after what she called a "tough show." She said,

“He was my hero that night, he was the MVP. I think because of what he's done and performing on such a big stage with the Yankees all over the United States, he understands my life in a way that nobody else really has, and we come from similar backgrounds and we really have a special connection that way, so, yeah, he was amazing that night."

On July 27, A-Rod rang in his 44th trip around the sun. On July 26, J. Lo hit the pause button on her Miami show so she could surprise A-Rod with a New York Yankees-themed cake. And then, she asked the arena to sing "Happy Birthday" to Rodriguez. The crowd obliged.

While in Saint-Tropez earlier this month, A-Rod and J. Lo posed for a picture. A-Rod leaned in a little too far and ended up bonking the side of his head on J. Lo’s wide-brimmed hat. They laughed, reset, and posed for the picture again. Fortunately, someone at their table caught the whole scene on camera.

A-Rod and J. Lo really brought it when they went to The Hustlers premiere at the Toronto International Film Festival on Sept. 7. Not only did they crush the red carpet together like only they can, but as E! News noted, A-Rod captured the evening on his cell phone in the now-classic A-Rod style.

This summer, MLB Network's Intentional Talk revisited an interview from 1998 where a young member of the Seattle Mariners roster shared what his dream date would entail. "Jennifer Lopez," A-Rod replied. "Hopefully you can find me a date with her." It only took about two decades, but his dream came true.

Speaking of dreams, here's hoping there will be more photos of A-Rod taking photos of J. Lo at award shows in our future.