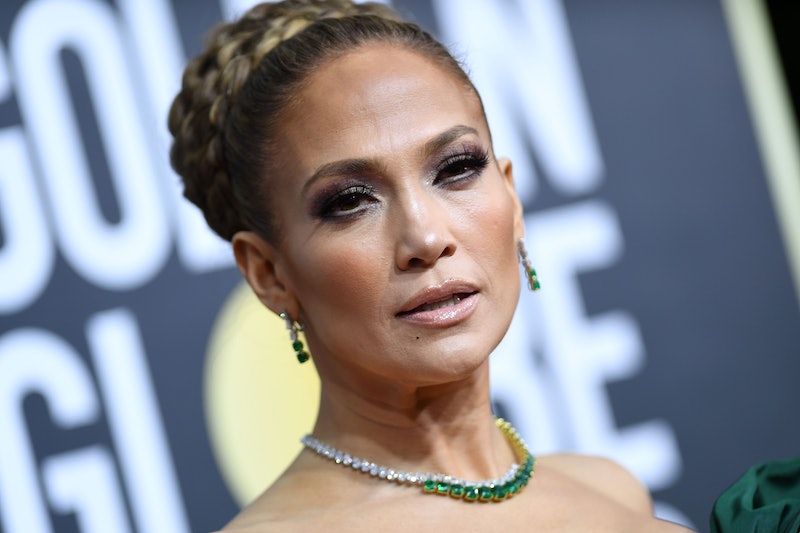 Stars of film and television are converging for the first awards show of the decade, and Jennifer Lopez's 2020 Golden Globes dress is basically a present for style fans. No, really. She's wearing a bow that would make any gift jealous.

At the awards show for both film and television, Jennifer Lopez walked the red carpet with partner Alex Rodriguez wearing a show-stopping strapless ballgown. The dress featured a voluminous white skirt and subtle train that met a metallic golden bodice at her waist and tied on the side with two bows — a metallic one in the front and an emerald-hued one draped underneath.

Like her gown, Lopez's hair brought serious oomph as well. According to his Instagram page, Chris Appleton, the Hustlers star's longtime hair stylist, is responsible for the braided crown atop Lopez's head — because let's be honest, if anyone deserves a crown, it's J. Lo, whose golden-toned brunette locks are sleekly swept into a tight braided bun.

As for her beauty look, makeup artist Scott Barnes kept Lopez's skin bronzed and glowing as usual, but went with a bit more color on the eyes, opting for a mauve-toned brown smoky eye with wispy lashes. Lopez also wore a glossy neutral lip.

Lopez is attending the 2020 Golden Globes thanks to her role in the 2019 film Hustlers. The movie, based on Jessica Pressler's New York Magazine article "The Hustlers at Scores," was produced by the singer and actor, but it's her role as veteran dancer Ramona that scored her a nomination for Best Performance by an Actress in a Supporting Role.

While her performance earned her accolades like tonight's nomination, Lopez also made headlines recently when she explained in a GQ interview that she took on the project for nearly nothing. She says in the piece that her love of the film and story propelled her decision to pursue Hustlers, not for any promise of money.

Clearly, Lopez's instincts were spot-on. Tonight, she's walking the red carpet with a Golden Globe nomination and in a stunning gown.

More like this
Jennifer Lopez Wore A Naked Dress To The Shotgun Wedding Premiere
By Dominique Norman
J.Lo's Micro-French Manicure Has A Fun, Sparkly Twist
By Olivia Rose Rushing
Jennifer Coolidge Hunted For Jewels & Lashes In J.Lo’s Hotel Room
By Jake Viswanath
The Biggest Fashion Moments Of Paris Couture Week 2023
By Dominique Norman
Get Even More From Bustle — Sign Up For The Newsletter
From hair trends to relationship advice, our daily newsletter has everything you need to sound like a person who’s on TikTok, even if you aren’t.