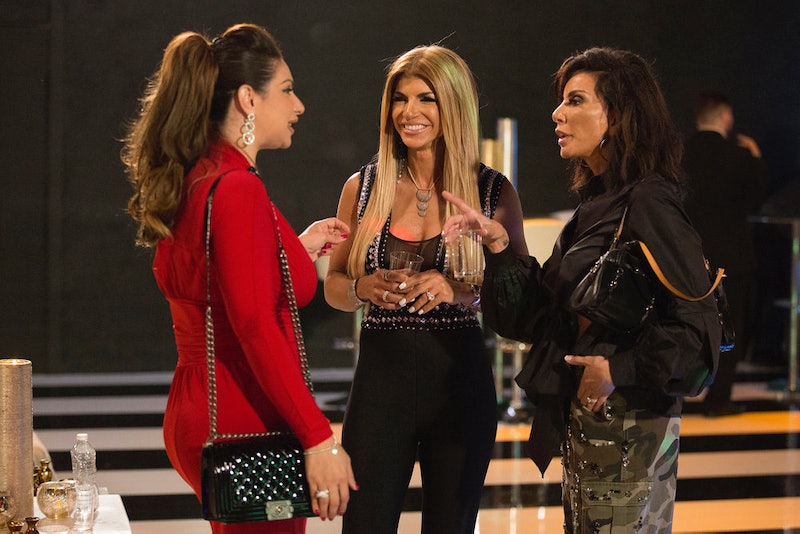 We’ve reached the point in this season of Real Housewives Of New Jersey in which people have stopped being polite and started getting real. That’s not to say that the women who already know each other haven’t been real from the start, but the new Housewives now know how the rest of the gang fight, and damn — the gloves are off, and the women are hitting below the belt. But the women of Real Housewives Of New Jersey are going too far, bringing families and husbands into their insults.

Jennifer and Margaret have been getting into it since Jennifer appeared on the Housewives scene, and they are straight-up mean to each other. It reached a pinnacle on the group trip to Mexico, when Margaret mocked Jennifer’s brother and said he had a mail-order bride; Margaret said that Jennifer looked like a part of a monkey’s anatomy; and Jennifer made comments about both Marge and her mother sleeping with married men.

No one walked away looking good here, but things really took a turn for the worst when Margaret said that Jennifer’s husband, Bill, slept in the pool house and spends more time with his girlfriend than he does with his family. Jennifer got up and left so as not to cause any bodily harm. Margaret admitted that she only said the things about Bill having a girlfriend to hurt Jennifer, and she has no proof that it’s true. She just wanted to say it out loud.

Melissa Gorga never shies away from a fight, but her main qualm with Jennifer, Margaret, and Danielle Staub — who ran into this conflict like a Manzo kid to a strip club carwash hybrid selling blk. water and Brownstone sauce — was that they shouldn’t be talking about each other’s children and husbands. Families are off limits. Say what you want about any other Housewife, but commenting on the kids is verboten. And Melissa is right in this case, because for the most part, the kids and husbands aren’t involved on the show. They’re living their lives in school and at work, and they shouldn’t be dragged into the mess.

Besides leaving the offspring out of it, the sort of allegations Margaret made against Bill, as Jennifer said, always stick. It just takes one cheating rumor to start a wash of them, even in a solid marriage. Not only is making cheating rumors gross and mean, it’s also extremely anti-feminist. Margaret is wrong to talk about Bill allegedly cheating on Jennifer (and Jennifer remarking on Margaret’s cheating) because it suggests that Jennifer is somehow responsible or should be ashamed if that were the case. No person should be ashamed if or when their partner cheated, because ultimately, it was the partner who decided to stray. Given free will, the only person who should answer for cheating is the cheater. And it might not even be cheating — couples have their own agreements that the public may not be privy to.

The idea what women are in charge of their husbands and can control their every move has been a recurring them on this season of Real Housewives Of New Jersey, as is the dichotomy between the “traditional” Italian housewife and a more “modern” woman, as if women can only fit into either bucket.

But Margaret and Jennifer and any other woman on the whole planet do other women an injustice by throwing the sins of a partner (alleged or confirmed) at them. These women should be bolstering another in a bad situation, not rubbing their nose in it. Not only is it not a good look, but it perpetuates the patriarchy, and no one wants that.