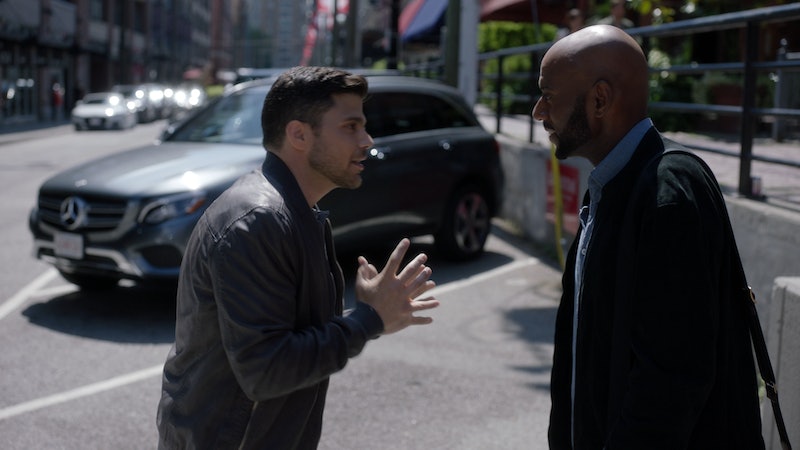 ABC’s "Cast From The Past" week is here and A Million Little Things is just one of the shows getting a little reunion action. Jerry Ferrara is reuniting with his Think Like A Man co-star Romany Malco, and Ferrara’s A Million Little Things character, Todd, is there to help Rome with the new movie Rome is writing. But judging from the clips and episode description, the reunion might not go over all that well.

According to the official episode synopsis for the October 10 episode, “mixed signals,” Ferrara’s Todd is an old producer friend of Rome’s that has some notes for Rome’s script, which throws Rome into a spiral because he’s concerned about changes being made to his extremely personal work. “[Todd] comes in and reads Rome’s script, and he has notes,” series creator DJ Nash told TVLine. Ferrara, formerly of Entourage and Power, may not seem the actor to next appear on A Million Little Things, but Nash told TVLine that he’s had Ferrara waiting in the wings for a while.

“[Ferrara] read for something a few years ago with me, and he wasn’t right for that. I just always thought, ‘Oh, I want to work with that guy,'” Nash said. “So I’m so happy it worked out, because he was wonderful.”

Ferrara may be "wonderful," but it’s not hard to see why his character's critiques of Rome’s script could hurt his friend's feelings — or worse, send Rome into a tailspin. Rome’s going through a lot right now. He’s just told his wife, Regina, that he wants a baby, even after the two of them decided that they were never going to have kids. He's also counseling PJ, a teenager he met in the hospital. Though Rome has referred PJ to Maggie, who is a psychiatrist, for therapy, PJ still talks to Rome. And Rome is the only one who knows that PJ thinks Jon is his dad and is hanging around until he gets some answers.

That's a lot for anyone to take on and the fact that Rome is also writing his creative dream and getting notes on it may cause it all to break down. Hopefully, Todd will be somewhat gentle with Rome, and ultimately, it will make Rome’s script better, stronger, and more marketable when it come to make, produce, and sell his film. Let’s assume that Todd has Rome’s best interests at heart here.

Rome attempted career move from commercial director to filmmaker is just the beginning of his Season 2 journey, too. And, according to Nash, things won't necessarily get easier for Rome and his friends. "Issues we have been dealing with, like depression, suicide, and all the things that happen in life, will continue to affect this group," he told Deadline. "There is a death that happens this season, and we will see how the group rallies to support each other." The first season, Nash explained, was about friendship and the second season is about family and what it means to belong. Hopefully Ferrara's Todd doesn't do too much emotional damage to Rome, who will have to be a rock through it all.

More like this
Everything To Know About The 'Daisy Jones & The Six' TV Series
By Maxine Harrison and Brad Witter
The Song At The End Of 'The Last Of Us' Ep 1 Has A Deeper Meaning
By Sophie McEvoy
'Mayfair Witches' Already Changed 2 Major Characters From The Books
By Grace Wehniainen
Every 'That '70s Show' Character Who Returned For The Netflix Spinoff
By Grace Wehniainen
Get Even More From Bustle — Sign Up For The Newsletter
From hair trends to relationship advice, our daily newsletter has everything you need to sound like a person who’s on TikTok, even if you aren’t.