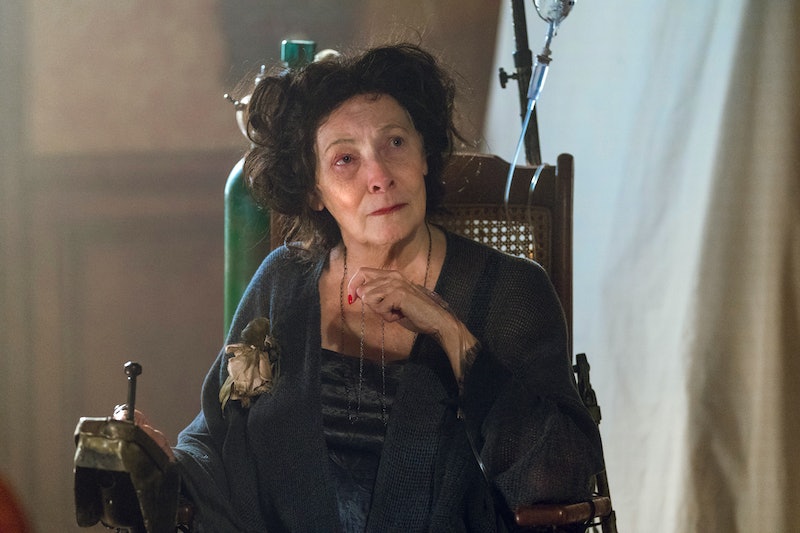 Only the tragic death of his beloved Tulip could bring Jesse Custer back to his grandmother's home for Preacher Season 3. As Season 2 showed, Marie L'Angell tortured her grandson as a child and Jesse's grandmother's history in the Preacher comics proves that was just the tip of the bayou iceberg. Betty Buckley portrays Jesse's gran'ma in Season 3, premiering on June 24. Before she becomes one of the major villains of this season, you might want to learn how despicable this character is in the comics. Spoilers for the Preacher graphic novel follow.

Preacher Season 3 moves locations to Jesse's childhood home, Angelville. Although he has less than fond memories of the place, Jesse brought Cassidy there in the Season 2 finale out of desperation. The Grail agent Featherstone killed Tulip and Jesse needs his grandmother's sorcery to bring Tulip back to life. Jesse will also encounter some other unpleasant figures from his past at Angelville — his grandmother's henchpeople, Jody and T.C.

AMC mostly refers to Buckley's character as Gran'ma (with Jody and T.C. calling her "Miss Marie"). But no matter what name she goes by, Marie L'Angell is a truly evil character in both the show and the comics. Although she's far more disturbing looking in the comics.

In the graphic novel, Gran'ma uses a wheelchair and has an IV and oxygen tank, as she does on the AMC show. But she's also more skeletal-looking when Jesse arrives back at Angelville. The circumstances surrounding his arrival are completely different as well. Jody and T.C. capture Jesse and a very-much-alive Tulip (no Cassidy) and bring them to Angelville. While being held prisoner, Jesse gives Tulip his family history. As the Vertiguys podcast notes, this story arc is called "All In The Family" and it occurs within the second issue of the graphic novels, Until the End of the World.

Marie L'Angell comes from a French Puritan family that settled in New Orleans around the time of Napoleon. She has mystical powers and didn't give birth to Jesse's mom Christina until she was over 60 years old. That makes Gran'ma over 100 years old in the present, which explains why she looks as she does. All the men in the L'Angell family were preachers, so instead of Jesse becoming a preacher for his father (who wasn't a preacher in the comics), it's actually something he does because of his grandmother.

Jesse was born after his mom fled Angelville and met his dad John Custer. When Jesse was about 4 years old, Jody and T.C. tracked the family down and forced them to come to Angelville. When they arrived, the menacing matriarch told Jesse's dad that the family could never leave Angelville again. Marie also told John, "You will groom your son for his destiny as a man of God."

Jesse's dad did try to flee, so he was killed by Marie's henchpeople. Christina and Jesse were then stuck in Angelville where Gran'ma pushed Jesse to believe in God and become a preacher. She also punished Jesse with the underwater coffin, which fans of the show saw in Season 2. And when Christina protested, Marie decided to have her own daughter killed. So Jesse spent the rest of his miserable childhood without his parents in Angelville.

Jesse eventually fled Angelville and met Tulip in Texas. But when they headed to Phoenix after a few years, Jody and T.C. found him again and threatened to kill Tulip if he didn't return to Angelville. So he left without telling Tulip and was forced to do a month in the coffin. Afterward, he finally became a preacher like his gran'ma wanted before he reunited with Tulip and got the Genesis power.

Most of this backstory has been changed for the TV series, but one thing that is the same is that Jesse's Genesis power isn't working when he arrives at Angelville with Tulip. But the major difference is that Tulip is alive when she gets to his childhood home. In the comics, it's Gran'ma who orders Jody to kill Tulip in front of Jesse so that she can finally control her grandson for good.

Even though Gran'ma isn't responsible for Tulip's death on the AMC show, she's going to show just how evil she is in Season 3. "It's a great challenge, because she's so complex," Buckley told Entertainment Weekly about portraying Gran'ma. "I mean, she really loves Jesse ... but at the same time, she's a real mean person, a very mean person." So knowing all this, Gran'ma may not be so interested in saving Tulip. But rather than spoil what happens to both Tulip and Jesse' grandmother in the comics, you can see how it all plays out in Preacher Season 3.

More like this
The 50 Most Powerful Characters In The Marvel Universe, Ranked
By Johnny Brayson and Nola Pfau
Shonda Rhimes' Net Worth Makes Her One Of The Wealthiest People In TV History
By Hugh McIntyre
'The Rings Of Power' Episode 7 Will Feature An “Unlikely Pairing Of Characters”
By Grace Wehniainen
'Firefly Lane' Season 2 Will Be The Show's Last — But There's A Twist
By K.W. Colyard and Grace Wehniainen
Get Even More From Bustle — Sign Up For The Newsletter