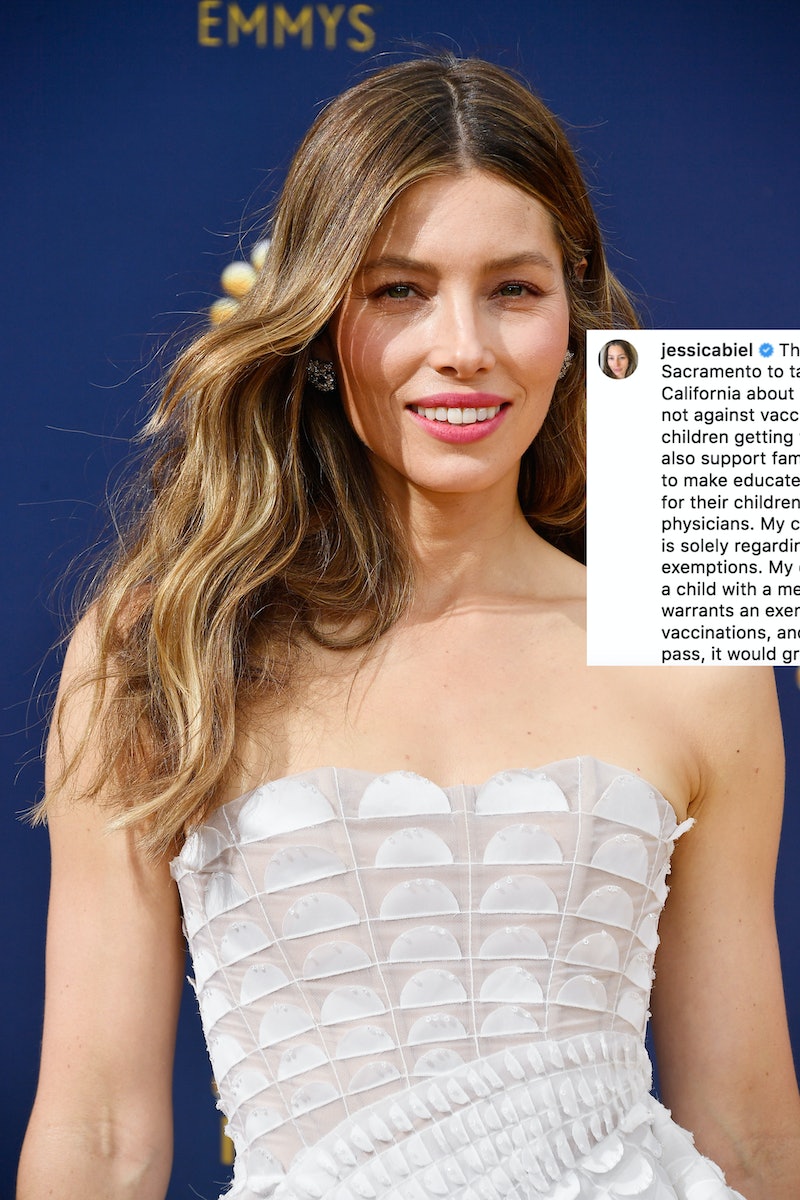 When big-name celebrities voice their opinions about big-time political issues, they must know that fans' reactions are going to be divisive at best, right? However, one star may have just learned that the hard way, as Jessica Biel responded to anti-vaxxer claims, following an onslaught of memes that were ... let's say, not exactly supportive. OK, that's putting it mildly. Some of them were actually pretty funny, but ... well, see for yourself.

Alright, this is going to take some quick explaining to start, cool? Cool. On June 11, Robert F. Kennedy Jr. posted several photos to Instagram that showed him and other lawmakers alongside Biel. And before you ask — no, they were not all there to discuss Cora's fate after the first season of The Sinner. Definitely still thinking about that, but I digress.

So, Kennedy is kind of notorious for being anti-vaxx, as reported by The Daily Beast, and the caption of his Instagram post with Biel led some to believe that she supports that idea as well. "Please say thank you to the courageous @jessicabiel for a busy and productive day at the California State House," Kennedy wrote.

Suffice it to say, many fans weren't exactly thrilled with this supposed revelation, and took to Twitter to vent their displeasure. And while some fans just straight-up rage, others chose to tie their criticisms to jokes about Biel, her career, and her husband, Justin Timberlake.

"This is worse than when Mary trashed the gym," one person wrote in reference to an episode of 7th Heaven and Biel's character on the show, Mary Camden. "She's bringing measles back," another person quipped, à la Timberlake's song, "SexyBack." A third fan took a similar route with his joke that read, "Justin Timberlake brought sexy back, and his wife Jessica Biel wants to bring the bubonic plague back." Oof.

Well, in an apparent response to the barrage of memes, Biel decided to explain her position via an Instagram post on June 13. Basically, she stated that she isn't flat-out against vaccinations entirely, but with a bit of a caveat. "I support children getting vaccinations and I also support families having the right to make educated medical decisions for their children alongside their physicians," she wrote.

Biel then went on to say that her specific concern was in regards to California bill SB-276, which focuses on medical exemptions from vaccinations. "My dearest friends have a child with a medical condition that warrants an exemption from vaccinations," Biel revealed, "and should this bill pass, it would greatly affect their family’s ability to care for their child in this state."

Look, the whole thing is a hot-button issue, no doubt about that. And it's pretty understandable that Biel's own experiences and close relationships would directly spark her desire to advocate in this particular instance.

Whether you believe she's right or wrong is a matter of personal opinion. Just know that if you're a celebrity, your personal opinion is probably going to be sliced, diced, and judged with vigor. Oh, and you better believe that there will be memes.