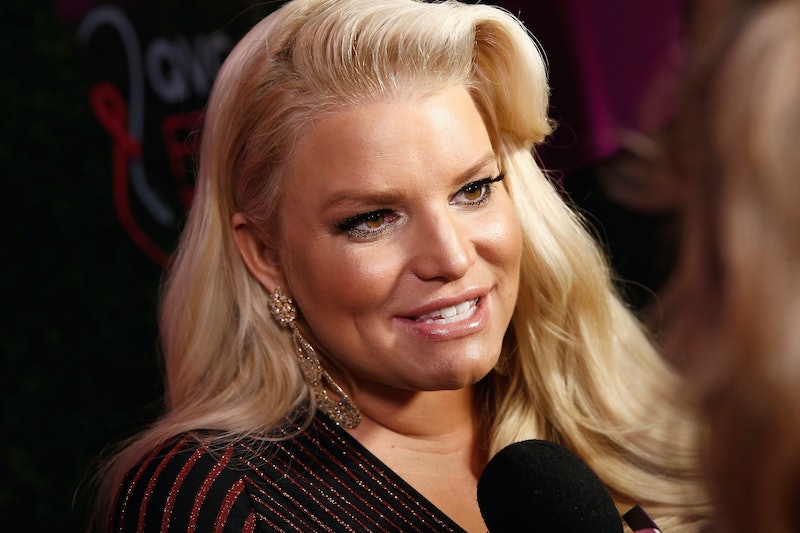 Remember when Jessica Simpson covered Nancy Sinatra's "These Boots Are Made for Walkin'" in 2005? Well, more recently Simpson has publicly struggled with those feet doing all of that walking during her pregnancy with her third child who was born in March. But, it looks liek we can all relax, because Jessica Simpson shared a swollen foot update on Instagram on June 18, and it looks like she's all back to normal!

Simpson practically broke the Internet in January 2019 when she posted a photo of her swollen ankle and foot due to her pregnancy. That was two months before her daughter Birdie Mae was born on March 19, and now it seems like she might be able to put on her ol' boots again because on Tuesday Simpson posted an Instagram of her ankles, sans swelling.

"I spy....my ankles!!!!" Simpson captioned the photo of her legs, three months after Birdie's birth. This wasn't the only foot update her followers received, though, because a week after posting the first photo of her swollen limb, Simpson posted a different photo of what she called "SKANKLES aka Skinny Ankles." It turned out that some of the remedies she tried out, like cupping — which Simpson also posted a photo of on Instagram, actually worked. Regardless of how helpful alternative therapies may have been during Simpson's pregnancy, it looks like the best remedy for swollen pregnancy ankles may just be to give birth.

As uncomfortable as Simpson's swollen extremities were, the singer and shoe designer certainly demonstrated how great a sense of humor she had about them. At the time of her pregnancy when everyone on Instagram was posting photos of themselves 10 years ago for a #10yearchallenge, Simpson posted her own challenge submission focusing on her foot's transformation. On one side of the photo you see Simpson's leg in Daisy Dukes à la the "These Boots Are Made for Walkin'" video, and on the other you see her swollen 7 months-pregnant foot.

Not only did Simpson poke fun at the changes in her feet while pregnant, but she also shared other details about her body during pregnancy on Instagram that plenty of fans found relatable. One of those photos featured Simpson holding up her toilet seat cover along with the caption, "Warning...Don’t lean back on the toilet when pregnant." Another Instagram that Simpson posted following Birdie's birth showed Simpson bent over, touching her toes. "Just stretching it out in my rubber corset. The joy of postpartum," the caption said.

Simpson has certainly given her fans a glimpse into her life as a new mom, and it looks a lot like many other women's experiences. On a photo of her many bags of breastmilk that Simpson posted in late May, many women commented and shared their own breastfeeding experiences. "I produced 100 ounces a day and donated over 50,000 ounces! It’s incredible what our bodies can do," one woman responded. "That is how I was man. Donated over 300 oz and still had some left over," another woman said.

The fact that Simpson has taken her fans along with her on her body's journey both during and after pregnancy is one of the many reasons why she'll always be one of the most relatable celebs, no matter what her ankles and feet look like.