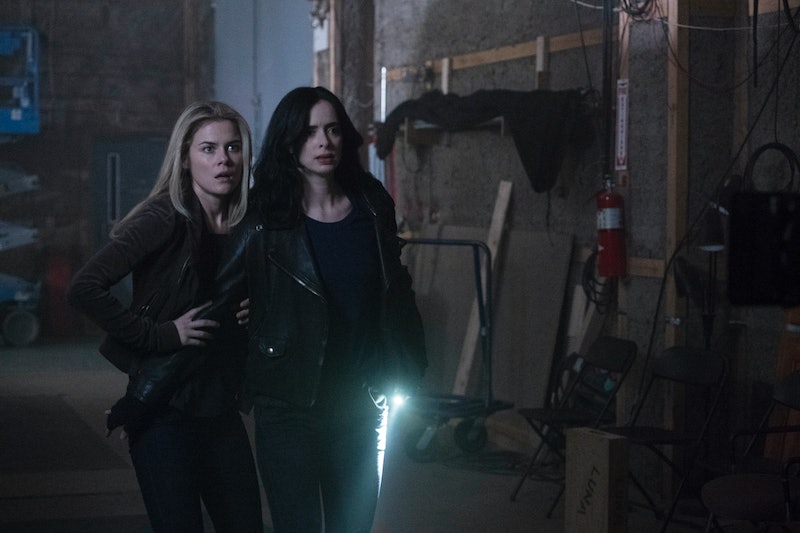 Much like the season that preceded it, Jessica Jones Season 2 is heavy, a game changer in so many ways. One of those ways is in the way Jessica Jones and Trish's relationship changes in Season 2 as the two women make choices that the other one either doesn't understand or doesn't approve of. Of course, Trish (Rachael Taylor) and Jessica (Krysten Ritter) have always seemed like polar opposites, though the women have both endured their share of hardship. But by the time you get to the second season's finale, you might be worried that they've done too much — that they've become too different — for their friendship to continue work. Well, don't. These women will be fine, Taylor assures me in a phone interview the day of the show's Netflix release. She can't imagine it any other way.

"Obviously, I don’t know what’s going to happen," she says as a disclaimer before she continues, "[But] I personally have such a deep belief in the friendship between Jessica and Trish. I think they have so much history together and so much deep loyalty and love and they’re such different women that they’re just kind of connected in a way. I think they’ll always be on the same side."

Spoilers for the entirety of Jessica Jones Season 2 ahead. The second season might make you question that assumption several times, though. After Trish convinces Jessica to investigate IGH with her, she finds and begins taking puffs from the super-soldier inhaler of her former boyfriend, Will Simpson. Jessica thinks that she's getting addicted to it, because Trish has a history of addiction, but Trish is convinced that she isn't and that she's simply making herself as strong and useful as Jessica is — but without Jessica's unwillingness to rise to the occasion of being a hero. The amount of times they clash heads over Trish's use of the enhancement inhaler, and the downward spiral their friendship goes on from there, is, well, a lot.

But Taylor believes in the strength of their relationship, even if she doesn't know what the future holds for them. "I could be wrong," she says. "But I think their love for each other is too strong for it to play out any other way."

Trish's relationship with Jessica isn't the only one to undergo a significant shift in the second season — nor is it the only one that Taylor hopes will work out for the better. Season 2 sees Trish growing close to Malcolm during her addiction to the super soldier inhaler; the two even sleep together, but Trish turns out to be using him for her own ends. Still, Taylor wants to see them form a genuine bond — and not just because she considers Malcolm actor Eka Darville to be a friend.

"I personally think Trish and Malcolm are more similar than they realized. They’re both addicts," says Taylor. "In a perfect world, I’d like to see them both connect in a real way and be able to have a meeting of the minds on how they both want to be more than what they are and how they both struggle with addiction."

And speaking of Trish's struggle with addiction — of Trish's struggles in general — the second season also explores and deepens Trish's complicated relationship with her mother. Despite the controlling attitude and the abusive behavior that Trish suffers under Dorothy (Rebecca De Mornay), though, Taylor understands why Trish won't cut the woman out of her life entirely. Even if Jessica thinks that she should.

"I think it’s just primal, our need as human beings to connect with and need our mothers. I think if there’s some kind of fracture in a relationship with someone’s mother, that just creates so much deep wounding," she says. "We see that with Trish... It’s her mom. She still loves her. In Season 2, you see more shades to all of the characters — and Dorothy, too. I think you see a little bit more of how much she loves Trish, and, in some respects, she’s just doing her best." Could her best be better? Sure. But, Taylor continues, "Trish still loves her mom and still needs her mom."

The journey that Taylor carries Trish through in Season 2 may be tough to watch, and it may inspire some pretty complicated feelings in fans of the character and of the show. But Jessica Jones has never shied away from exploring these hard subjects — from domestic abuse to sexual violence to a Season 2 storyline with Trish and a former director who abused her that is eerily similar to a #MeToo story — and that's something that Taylor has always loved about the show.

"Our show has always been about female empowerment and always been about how women use their voices and all of the complications that can sometimes come with that," the actor says, "The fact that we kind of speak to what has been happening right now [with the #MeToo movement] is very timely. And I think it’s cool. If I can be part of a show that adds to the conversation in any way, I think that’s awesome."

And it's true that Jessica Jones has even more to say in Season 2 than it did in Season 1, especially through the character of Trish. But, hopefully, Trish's relationships — with Jessica, with Malcolm, with her mother — will survive her questionable choices.