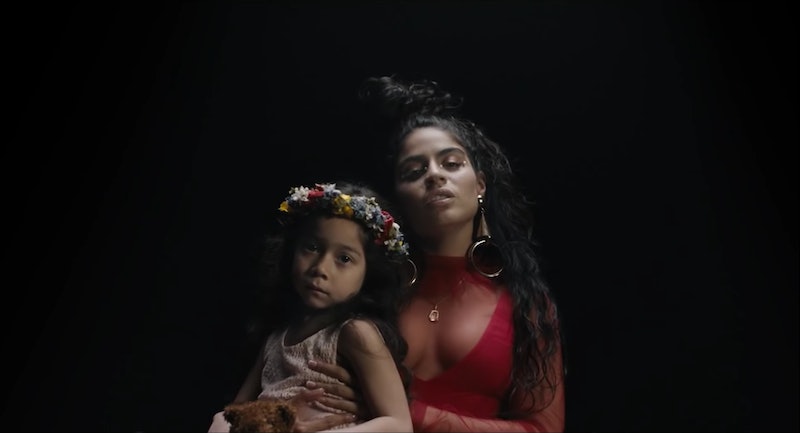 It's extremely difficult to ignore the current political climate — so Jessie Reyez is making her feelings on the Trump administration's policies a key part of her music. On Friday, Oct. 4, Reyez denounced Trump's immigration policies in "Far Away," her new single, and used the music video to shine a light on the pain and devastation that ICE raids and separating migrant families at the border can cause in the lives of millions of people.

The powerful clip, which is for Reyez's first single from her upcoming full-length debut album, opens on a white family gathered around the TV to watch the singer dance, contrasted with images of President Trump and signs calling for the country to "Close Our Borders." "You're still a world away," Reyez sings about a long distance relationship, separated by immigration issues. "And you're still waitin' for your papers / Been feelin' like the government wants us to break up."

From there, the video shows a happy Reyez dancing at a party with her love interest, though their bliss is soon interrupted by an ICE raid. As the pair gets pulled apart from one another in the middle of a smoke bomb, the video features flashes of angry dogs barking, and officers forcing people onto the ground. However, the most powerful images come at the end, with Reyez's love interest and his mother holding onto each other in a pose reminiscent of Mary and Jesus; in a flash, he has gunshot wounds on his chest and she's holding his body and sobbing.

Reyez — who was born to Colombian parents in Canada — released a statement alongside the powerful video, explaining that the video is about "attachment," and reflecting on the heartbreak that comes with couples and families being separated at the border. "Imagine finally finding your home in another human being but they’re stuck on the other side of this rock we’re all on," the singer explained in the statement, per Variety. "You’re left wanting nothing more than a hug — their hug — that simultaneously feels like a pillow and a drug. Somehow when they hurt, you hurt, when they smile, you smile."

In addition to raising awareness for those affected by the Trump administration's immigration policies, Reyez is also using her new music to raise money for organizations aiding the immigration crisis. On her website, fans can "be part of the solution" by donating to nonprofits like the ACLU, Al Otro Lado, and The Florence Immigrant & Refugee Rights Project.

The "Far Away" video is far from the first time that Reyez has spoken out about the immigration crisis; in a September interview with Billboard, Reyez teared up while speaking about the issues facing migrants at the border. "I wish my non-Latin friends had the capability to empathize more with what’s going on with the immigration right now," she told the outlet, adding that she wants everyone to understand how hard it is to be separated from their loved ones. "Talk to your enemies; sometimes ignorance comes from a lack of understanding," Reyez added.

With her new video and her commitment to raising awareness of the immigration crisis, Reyez is encouraging her fans to seek that understanding, and make a difference for those separated at the border.

More like this
Here’s How Lizzo Is Supporting Abortion Rights After The Roe v. Wade Reversal
By Brad Witter
Eurovision 2023 *Might* Be Held In The UK
By Sam Ramsden and Rachel Mantock
Olivia Rodrigo’s Song Dedication To 5 SCOTUS Justices Sent A Strong Message
By Grace Wehniainen
Will Beyoncé Be At The BET Awards To Perform “Break My Soul” Or Attend The Show?
By Jake Viswanath
Get Even More From Bustle — Sign Up For The Newsletter