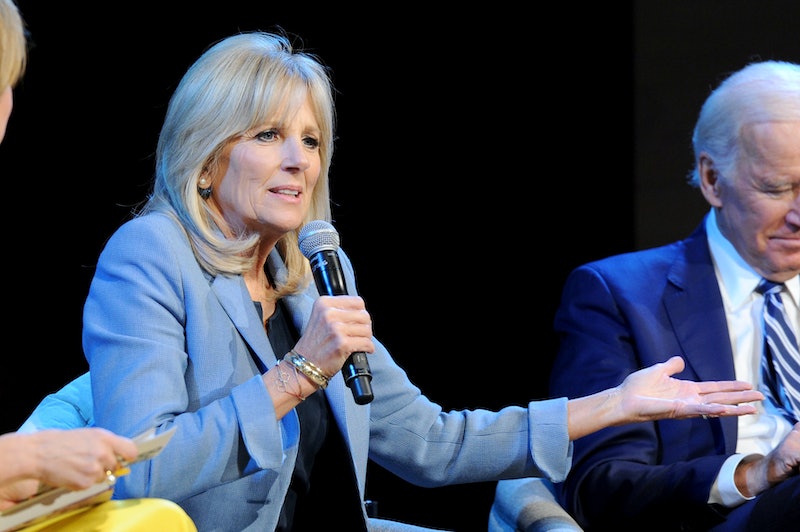 Presidential candidates' spouses can be counted on to show up on the campaign trail nowadays, and while former second lady Jill Biden hasn't always played the traditional role expected of her, she's stepping in to speak on behalf of her husband now. In a new interview with NPR in which she discussed the release of her new book, Where The Light Enters, Biden said people should "move on" from the Anita Hill controversy and Joe Biden's role in it.

"I watched the hearings like most other Americans, and so I mean Joe said, as I did, we believed Anita Hill. He voted against Clarence Thomas," Biden told NPR's Rachel Martin. "And as he has said, I mean he's called Anita Hill, they've talked, they've spoken, and he said, you know, he feels badly. He apologized for the way the hearings were run. And so now it's kind of — it's time to move on."

What Biden's comment glosses over is that Joe Biden's statements on Anita Hill have changed markedly over time, but he has never offered a public apology, according to The New York Times. While the Times reported in April that he had called Hill to express his "regret for what she endured," Hill told the Times that she wasn't satisfied with what she considered to be a non-apology.

Joe Biden's role as the chairman of the Senate Judiciary Committee during the Clarence Thomas confirmation hearings received renewed focus in the fall of 2018, when a similar situation arose surrounding the Brett Kavanaugh confirmation hearings. Just as Dr. Christine Blasey Ford accused Kavanaugh of sexual misconduct, Hill had accused Thomas of sexual misconduct; both men vehemently deny the respective allegations, and both women faced at times hostile situations in their respective Senate hearings.

Joe Biden, as chairman, did not stop the political attacks that came at Hill, as The New Yorker wrote. Soon afterwards, he told The Washington Post that he regretting not having "attacked [Hill's] attackers ... more frequently and consistently." His later statements, though, according to The New York Times, never amounted to a clear apology for his own behavior during the hearings.

Even after Joe Biden and Hill spoke in April, Hill made it very clear that she didn't feel that the conversation wasn't enough for her to consider backing Biden.

"He needs to give an apology to the other women and to the American public because we know now how deeply disappointed Americans around the country were about what they saw," Hill told The New York Times. "And not just women. There are women and men now who have just really lost confidence in our government to respond to the problem of gender violence."

In her interview with NPR, though, Jill Biden seemed to take a different view of her husband's conversation with Hill.

"He was so happy that she did take his call, and they spoke," Biden said. "I think they came to an agreement."

Hill, in her recent interview, didn't mention anything about such an agreement.