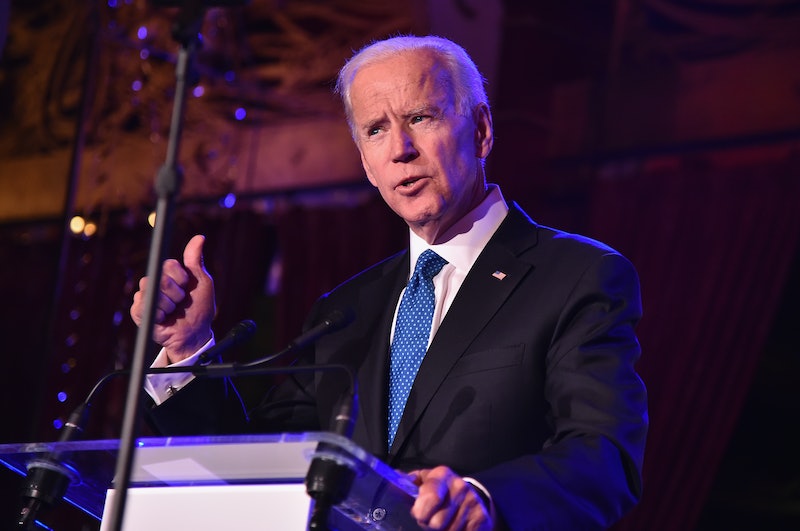 As the midterms approach and it becomes more timely to speculate about potential presidential runs, news reports are circulating about challenges for the potential candidates. Look no further than a New York Times report about former Vice President Joe Biden and his treatment of Anita Hill during her testimony in front of the Senate Judiciary Committee in the 90s.

With similar committee hearings dominating headlines — down to the angry men yelling about witch hunts and the calm women witnesses — Biden's own conduct during the Clarence Thomas confirmation hearings could be one of his biggest liabilities, if Biden chooses to pursue a third run at the presidency, according to reports from Politico, The New York Times and USA Today dating back to 2008.

Biden said in 2017 that he owed Hill an apology, but it's unclear if he ever called her. In September, Biden told Today that he was "sorry" and that he always believed her. "I'm sorry I couldn't have stopped the kind of attacks that came to you, but I never attacked her, I supported her. I believed her from the beginning," Biden told Today during an interview in support of Dr. Christine Blasey Ford, who accused Judge Brett Kavanaugh of sexual assault while both were in high school. (Kavanaugh has repeatedly denied Ford's accusation.)

Despite these public apologies, Biden has been repeatedly criticized by feminists and women's groups for how he ran the Judiciary Committee when Hill testified about the sexual harassment she endured while employed under Thomas. (Thomas also vehemently denied Hill's accusations.)

This brings us back to the Times report by Alexander Burns and Jonathan Martin. Burns and Martin write of Biden: "Privately, he has also described it as unfair that Ms. Hill continues to hold him responsible for her rough treatment in the Senate."

It's still unclear if he's ever apologized directly, but the Times report said Biden did not reach out to Hill during the Kavanaugh hearing last week. Bustle reached out to Biden's office for comment on the report.

Additionally, there's also no larger plan in place to directly address Biden's role in the Thomas confirmation hearings, according to the report, despite the national conversations about sexual harassment and assault spurred by the #MeToo movement.

Instead, Biden has largely focused on praising Ford's bravery. "Dr. Blasey Ford gave courageous, credible testimony. She was denied an FBI investigation, which was automatic when I was chairman," Biden said at a rally for Democrats in Rhode Island on Sunday, according to The New York Times.

But if Biden wants to be the Democratic presidential nominee, he will eventually have to address it. At Glamour's Women of the Year Summit in November 2017, writer Rachel Miller asked Biden if there was anything he would do differently in that situation. These questions about Hill and his conduct are going to be asked again and again, because the #MeToo movement isn't dying off.

But what "stepping up" means with respect to the 2020 presidential election and a clear conscience may be different things. Time will tell if Biden will feel the need to make his feelings on Anita Hill more publicly known, or if he'll directly apologize. Until then, the potential Democratic presidential field is already pretty crowded.