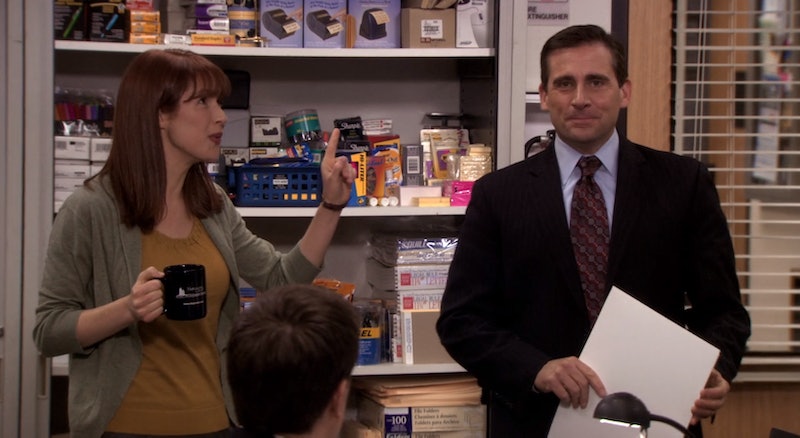 If you've wondered if Michael Scott is a fan of dark pop music, consider this the answer you've been waiting for. In a recent interview with Rolling Stone, B.J. Novak revealed that the cast of The Office personally approved Billie Eilish sampling the show on her debut album, When We All Fall Asleep, Where Do We Go?.

Eilish — who is a self-proclaimed super fan of the iconic NBC sitcom — featured audio from the "Threat Level Midnight" episode on the song "my strange addiction," in which Michael unveiled the plot of his movie to his coworkers, who all dismiss his cinematic dreams. However, in order to use those lines on the track, Eilish had to get approval from every single person in those scenes.

"They had to get approval of all the cast that was on it," which included stars Steve Carell, Mindy Kaling, and John Krasinski, Novak told Rolling Stone. "I was fine with it regardless," added Novak, "but I was like 'Wow, bonus: This is a banger.'" Thankfully, the rest of the cast and writers involved felt the same way, and Eilish was able to use the samples on her album.

According to Eilish, the decision to incorporate her favorite show on one of her tracks was something that happened naturally. "When we made the beat for 'my strange addiction,' it reminded me of the song they play when they do the Scarn dance," Eilish told MTV News in late March, referring to the rap that Michael's alter ego, Michael Scarn, dances to in his homemade movie.

"I thought that was really funny," Eilish continued, "so we literally just ripped the audio from Netflix and put it in the song, not at all thinking that they would say yes to it and we'd be able to put it out. Also, it's about strange addictions, and The Office is mine, so." The singer's obsession with the sitcom extends far beyond just her debut album — in fact, Eilish was known for playing The Office theme song at the start of her performances in concert.

"When I wake up, I put on The Office. If I’m making a burrito, I turn on The Office," Eilish told ELLE in a recent interview. "I need the distraction so I don't think. It's like therapy for me. I have way too much to think about and people [I don't want] to disappoint." While the singer's obsession with the sitcom seems logical to everyone who has rewatched it over and over on Netflix, the show's enduring fanbase has surprised Carell himself, who was constantly reminded by his Beautiful Boy costar Timothée Chalamet that he's an icon for Gen Z.

"I’m always trying to tell him, he's like an icon," the Oscar nominee joked on The Late Show With Stephen Colbert back in November. "He said he visited a college campus with his kid. He was like, 'I was surprised that people were running up to me.' It’s like, 'Steve, you’re like a sex icon.'"

Sadly, all of that enduring love for Michael Scott doesn't mean that Carell is likely to reprise his most iconic role any time soon. "Because The Office is on Netflix and replaying, a lot more people have seen it recently," Carell told Esquire in an October interview. "And I think because of that there’s been a resurgence in interest in the show, and talk about bringing it back. But apart from the fact that I just don’t think that’s a good idea, it might be impossible to do that show today and have people accept it the way it was accepted ten years ago."

"The climate’s different," the Oscar nominee continued. "I mean, the whole idea of that character, Michael Scott, so much of it was predicated on inappropriate behavior. I mean, he’s certainly not a model boss. A lot of what is depicted on that show is completely wrong-minded. That’s the point, you know? But I just don’t know how that would fly now."

At least Eilish has found a way to offer fans a way to relive all of Michael Scran's most hilarious moments, over and over again, no streaming service required.