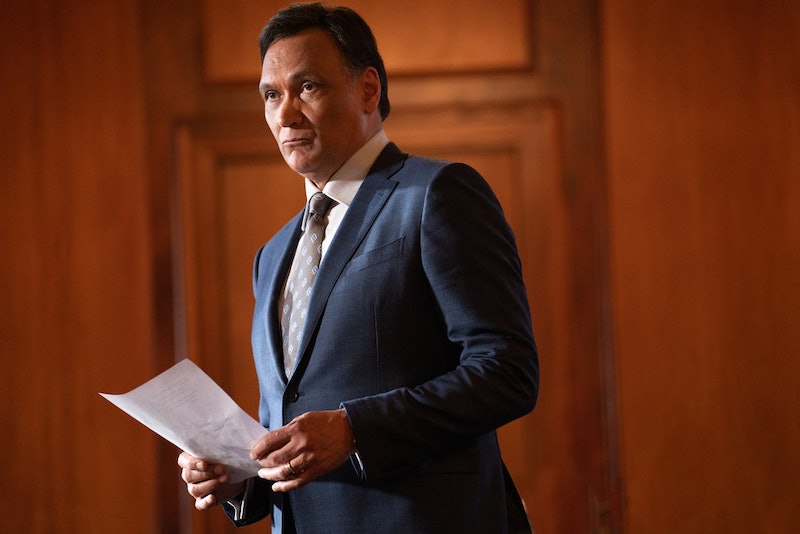 Smits is no stranger to playing an attorney as an alumnus of both L.A. Law and Outlaw, so he was pretty much a shoe-in to play Elijah. The elite lawyer runs the Strait & Associates law firm with his estranged daughter Sydney (Caitlin McGee) after he persuades her to return to the practice following the death of her mother.

That father-daughter relationship will be central to Bluff City Law's drama, and it's one that Smits is keen to explore. "You find out in the pilot that one of the reasons why they’re coming together is they’ve suffered loss, so the sharing of grief has a lot to do with bringing them together. But it seems that they have different ways of practicing law," he explained in an interview with Parade.

"One of the character plot points in the pilot is that Sydney’s character has decided to pursue a more corporate legal-eagle venue in terms of the firm that she was involved with. But she’s grown up around Elijah and what the precepts are in terms of their belief system, and she might view how his approach to the law is more conventional, conservative."

He also told TV Insider that since Sydney's professional choices are in stark contrast to the morals she was raised to embrace, the effects of that are likely to spread beyond her relationship with Elijah. "It does cause bumps, because there are people who were [at the firm] and remember the rift between them when she left," he revealed. "There are new colleagues who want to position themselves a certain way in the structure of the firm and now have to deal with this family member who is a great lawyer."

"Her return creates a lot of good stuff and a lot of tension, and it keeps the relationships between the characters very messy as they continue to do cases that matter. So you have this great juxtaposition of character complication and aspirational topics that the show deals with."

Talking to Parade, Smits revealed that while he's comfortable in the on-screen courtroom, he was grateful for the opportunity to play a character like Elijah because he's so much different than anything he's done in the past. "He wants to do good. He’s rock solid, a pillar of the community and, because of that, his character energy is a lot different than the bouncier guys that I’ve played," Smits said.

While Straits & Associates is a law firm that will handle "all types of cases," Elijah is particularly interested in cases pertaining to social justice and has gravitated towards those types of cases more and more over the years.

"They’re a full-service law firm — all types of cases, because you’ve got to pay the rent, right? But through the years, Elijah’s [cases] tended to lean more toward social justice," he told Parade. "So far, we’ve dealt with the farming industry and impacts of chemicals, wrongful imprisonment, and familial issues."

It's clear that Bluff City Law is a legal drama that wants to make a difference. But it's also a story about a father and daughter coming back together, which means there will be no shortage of drama.