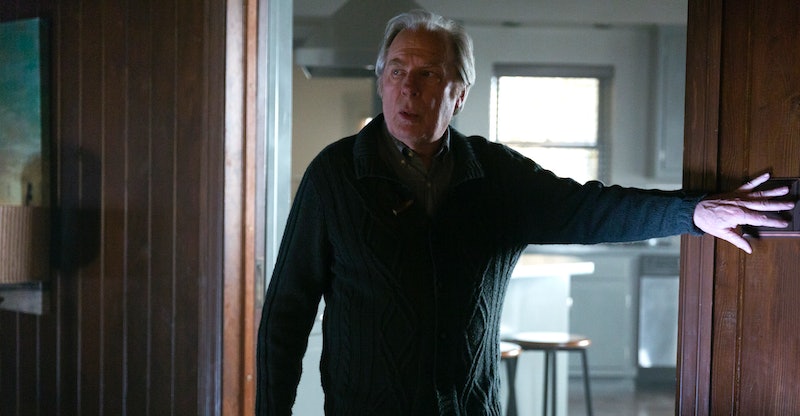 Better Call Saul sheds some light on the title of the Season 3 finale, "Lantern," during the last moments of the episode in the most devastating way. Spoilers for the Better Call Saul Season 3 finale follow. After Howard Hamlin forces Chuck to retire, the older McGill relapses into his electromagnetic hypersensitivity condition. As his mental health spirals out of control, Chuck attempts suicide on Better Call Saul by kicking over his camping lantern and lighting his house on fire. Considering the prequel series is setting up how Jimmy McGill will become Saul Goodman from Breaking Bad, it seems safe to assume that Chuck will die on Better Call Saul and his death will lead to his brother's transition.

The Season 3 finale starts with a young Chuck reading to Jimmy by the light of a camping lantern — a terrible foreshadowing of what's to come. (And also a reference to the Season 3 premiere, "Mabel," since Chuck is reading The Adventures of Mabel.) Back in the present, Chuck is being naively hopeful that he can make amends with Howard and stay on with HHM, but the tide turns for him fairly quickly. Howard pays Chuck out of the law firm that he built, leaving the M of HHM with $3 million (and more on the way), but Chuck's law career as he knows it is over.

Things are bad for Chuck in this moment, but Jimmy shows up at his home to genuinely make amends since he is shaken by Kim's car accident. Yet, Chuck rejects his regret and even says to Jimmy, "You've never mattered all that much to me." But even after showing this cruel side to Chuck, Better Call Saul is amazingly still capable of making viewers feel bad for Chuck as his illness takes hold again and he begins to destroy his home to remove all electricity.

It isn't really a surprise that Chuck's mental health deteriorates so much that he wants to commit suicide, but it still is a gut-wrenching moment when Chuck repeatedly kicks the lantern and sets his house on fire. And while the episode technically ends on a cliffhanger, the chances of Chuck surviving for Season 4 seem slim. During the post-finale show, Talking Saul, host Chris Hardwick asked showrunner Peter Gould if Chuck will live and Gould responded, "It sure looks bad for Chuck." But Gould also noted that even if Michael McKean's character is dead, he could return in flashback scenes, saying, "If he is dead, that doesn't mean we're finished with the character."

Although viewers will not know for certain what happens to Chuck until Better Call Saul enters its fourth season, the last scene of Season 3 shows that Chuck is at his lowest point with no career and without his brother by his side. And considering that Chuck's last words to Jimmy before trying to take his own life are ones of animosity, Jimmy will forever be haunted by how he couldn't help his brother when he needed him most.