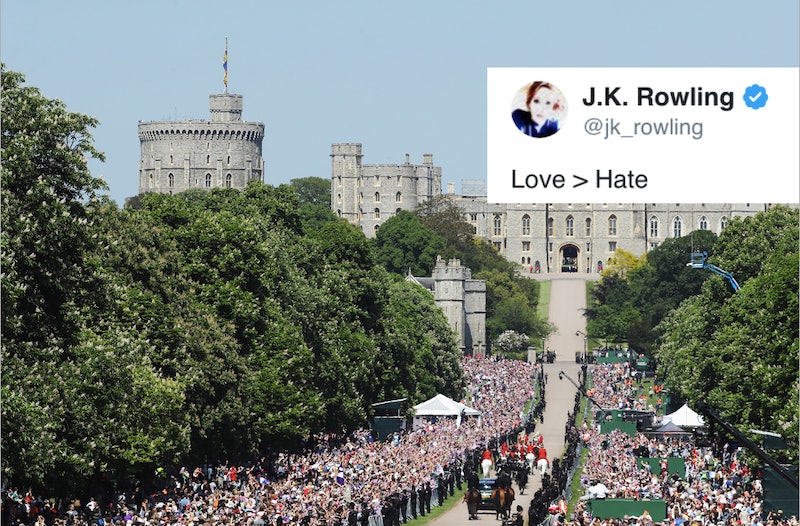 The whole world seemed to have turned up — in person or virtually — for Prince Harry and Meghan Markle's much-anticipated wedding, and the crowd size didn't escape author J.K. Rowling's notice on Twitter. In fact, Rowling connected the royal wedding to Trump's 2017 inauguration by comparing the crowds that showed up to celebrate both — and it didn't come out looking great for President Trump.

In a tweet on Saturday morning, Rowling posted side-by-side pictures of the crowds that lined the road leading up to the site of the royal wedding, and the crowd gathered on the National Mall in January 2017 for Trump's inauguration. The pictures make it clear that the wedding boasted a far higher turnout, despite Trump's frequent boasts about his inauguration crowd size.

Rowling, ever the economical wordsmith, included a brief caption along with the images: "Love > Hate." This was reminiscent of one of Hillary Clinton's 2016 campaign slogans, "Love Trumps Hate." While Clinton's campaign, of course, did not succeed in the end, Rowling's observation makes it clear that far more people were interested in coming to celebrate Harry and Meghan's union than they were in celebrating Trump's inauguration — and she's not the only one who's noticed it.

The BBC Three twitter account also took aim at Trump, posting a similar pair of pictures to what Rowling tweeted, along with a simple caption: "just saying ¯\_(ツ)_/¯".

BBC Three is the BBC online channel aimed at a younger audience, hence the less serious tone than you might expect from a venerated media organization like the BBC. Slate noted that their comparison tweet fell in a similar vein to the multitude of comparisons that people made between Trump's 2017 inauguration and Barack Obama's 2009 inauguration. According to Politifact, the latter is estimated to have boasted the largest attendance for an inauguration ever — despite Trump's, and his former press secretary Sean Spicer's, famous claims to the contrary.

No one could make the claim that Harry and Meghan had the biggest wedding ever or that the attendance topped any presidential inauguration, as only about 600 people received invitations to be part of the festivities. However, the pictures that Rowling and BBC Three shared were of the route of Harry and Meghan's carriage ride from St George's Chapel, where the wedding too place, to St. George's Hall, the reception venue. The whole purpose of the carriage ride was so that the newly proclaimed Duke and Duchess of Sussex could greet the public, and the public really turned out in force to greet them.

The Telegraph reported that the Thames Valley Police were preparing for 100,000 spectators to assemble along the carriage ride route, which is well below the 250,000 low end of Politifact's estimated attendance for Trump's inauguration. However, the photo from above the inauguration clearly shows a lot of empty space that had been prepared for guests, whereas the photo of the carriage route shows that all of the available space was taken up by attendees.

While the British royals don't make their political opinions public as a rule, snapshots from Meghan's life before she joined the royal family make it clear that she's not a fan of the current U.S. president. In an 2016 interview with Larry Wilmore, Markle called Trump "divisive" and "misogynistic," and the president, like all other political figures, didn't receive an invitation to the wedding. Markle won't be able to make any more statements like that about the president or any other politician now that she's made a transition from actress to duchess, but J.K. Rowling certainly doesn't have to play by that rule.