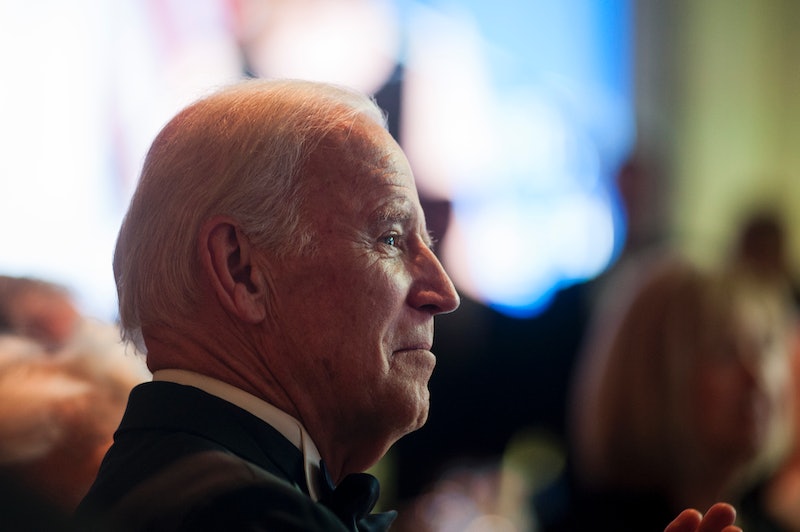 With over 50 dead and 500 injured in the largest mass shooting in modern America, many people are still coming to terms with the extreme loss of life that just took place. The shooting took place at Route 91 Harvest, a country music festival in Las Vegas, where spectators were shot at from the 32nd floor of the Mandalay Bay Resort & Casino.

While the death and injury tolls continue to rise, people are still in shock and completely heartbroken. The shooter was found with at least 10 guns in his hotel room, allowing him to commit such enormous acts of violence in a short time period. When Trump addressed the United States in a press conference on Monday, he described the shooting as "an act of pure evil."

What he did not do is address the need for gun control reform — or comment on the horrific gun violence in this country. He did not refer to the weapons or guns. He offered prayers, but prayers won't change anything that happened — or keep tragedies like this from shaking America again in the future.

Former Vice President Joe Biden, however, did not shy away from the issue; instead, his response to the shooting on Monday gets to the heart of the problem. In addition to expressing his shock and support, Biden directly addresses the reform needed to help save American lives.

This is not the first time he has spoken out against gun violence or called on the need for gun control. In a live-streamed address last year, Biden said:

Gun violence is ravaging our communities. Of all the civilized countries in the world, this is an exception. It doesn't have to be this way.

It doesn't have to be this way — and there is no excuse for inaction. The numbers of people dying in America every year through gun violence is astounding. There were 372 mass shootings in the U.S. in 2015 alone, ending up with a total of 475 people dead and 1,870 wounded. And those are only the mass shootings — America has nearly 30 times more gun deaths per capita than the United Kingdom. It leaves the rest of the world dumbfounded and confused.

"This was a classic WMD. This was a weapon and a man of mass destruction," said Clark County district attorney Steve Woodson in a press briefing.

And, according to experts, the amount of bullets that rained down on spectators must have come from powerful automatic weapons. As law enforcement analyst James Gagliano told CNN:

It's insulting and shameful that our current president refuses to take on the NRA or other gun lobbyists — though it's no surprise given that the NRA broke their record on campaign spending to help get Trump elected, giving over $30 million to the Trump campaign.

In contrast, listening to Biden's statements makes it difficult not to feel nostalgic for the Obama administration. They may not have passed gun control reform, but at least they had the integrity to try — Biden's words are a reminder of that.

If you want to join in the fight and honor the victims of the Las Vegas tragedy, you can call your Congressional representatives to show your support for gun control reform. It's time.

Here are some ways you can also help the victims in Las Vegas.