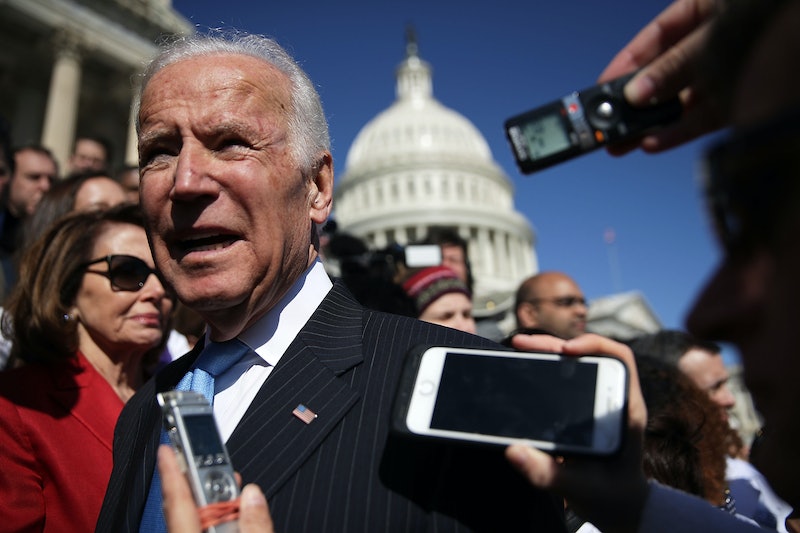 By now, it's a safe bet that you've heard about President Donald Trump's explosive, completely unsupported, and widely rebuked claim that former President Barack Obama had Trump Tower wiretapped in advance of the 2016 presidential election. It's a claim that's been disputed and shot down by basically everybody who would know, from NSA director Mike Rogers, to FBI director James Comey, to Obama-era intelligence officials like James Clapper, and even Speaker of the House Paul Ryan. And on Wednesday, a familiar voice finally weighed in. Joe Biden's response to Trump's wiretapping claim was exactly what you would've expected.

In other words, it was funny, dismissive, and biting all at once. Biden, who exited the vice presidency on Jan. 20 and hasn't yet made any moves to return to public office, paid a visit to Capitol Hill on Wednesday morning to rally support for the Affordable Care Act (otherwise known as Obamacare), and to oppose the GOP's replacement bill, the American Health Care Act (otherwise known as Trumpcare).

Amid all the other chatter, a reporter did manage to question Biden about Trump's wiretapping allegation. And the 74-year-old former vice president's reply was sharp. According to Dave Weigel of the Washington Post, Biden replied "Yeah, five or six times. Are you serious, man?"

And with that, Biden gave Trump's allegations no more time than they deserved, and just as little respect. This is the first time that either the previous president or vice president have spoken out personally on Trump's insistence, although Obama did indirectly respond by way of a statement delivered by his spokesperson Kevin Lewis:

It should come as no surprise that Biden would enjoy digging the knife in at Trump just a little bit. While he ultimately opted not to run for president in 2016, in the aftermath of the untimely and tragic death of his son Beau, he nonetheless showed genuine zeal for going after the then-Republican nominee. He also hasn't ruled out returning for one last presidential run in 2020, although he'd set an age-related record if he actually managed to win ― he'd be 78 when sworn in, the oldest president ever at the start of his first term.