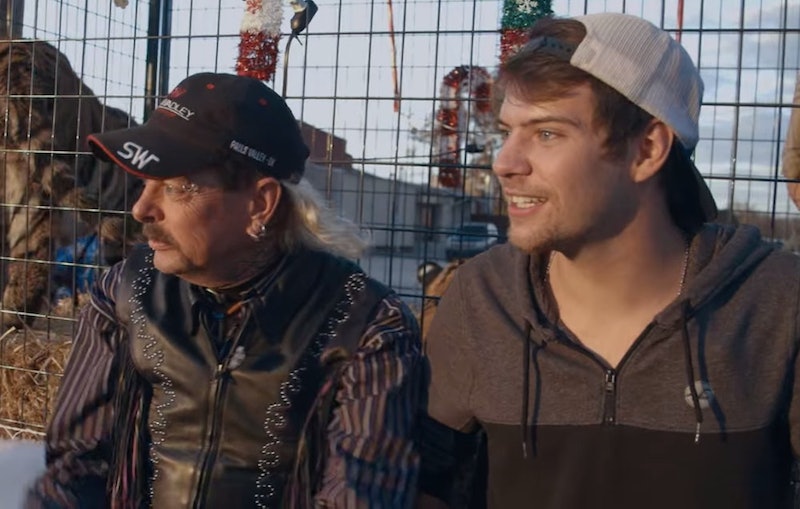 Hit pause on “I Saw a Tiger” for the latest Tiger King update: Joe Exotic’s husband Dillon Passage has weighed in on Nicolas Cage’s casting as the gun-toting, mullet-wearing tiger breeder and country singer made famous in Netflix’s Tiger King: Murder, Mayhem, and Madness. In his first TV role in his illustrious film career, Cage will star as Joseph “Joe Exotic” Maldonado-Passage in a new scripted series from American Vandal showrunner Dan Lagana and Paul Young. While Exotic hasn't yet heard the news due to quarantine, Passage told E! News that his imprisoned beau will be “so excited."

“He is A-list,” Passage said of Cage. “And I really thought it would be David Spade with his Joe Dirt-looking ass.” Passage added, "If they ask for my help with the movie, I'd definitely want to be helping, if I get to meet Nic Cage. Hell yeah!"

Passage also has some ideas on which actors should portray him in Cage’s series. “I'm really hoping for either Zac Efron or Paul Wesley to play me," he told E! News. "I couldn't imagine who would play anyone else, they are such an insane cast of characters. I don't know how anyone is going to capture them, but it'll definitely be interesting to see."

Based on a 2019 Texas Monthly article titled “Joe Exotic: A Dark Journey Into the World of a Man Gone Wild” written by Leif Reigstad, Cage’s series will hail from CBS TV Studios and is separate from the previously announced series with Kate McKinnon attached as Carole Baskin, based on a Wondery podcast titled Joe Exotic: Tiger King.

Exotic was sentenced to 22 years in prison in January for his connection to the murder-for-hire plot against Baskin that was detailed in Netflix’s docuseries, as well as various counts of animal abuse. While Netflix’s Joel McHale-hosted Tiger King after-show indicated that Exotic’s former employees have no sympathy for their former boss, Passage’s support for his husband has not wavered. “I’m not going anywhere,” Passage told PEOPLE in April. “Joe was there for me in my darkest moments. I’m not going to just abandon him when he needs support more than anything.”