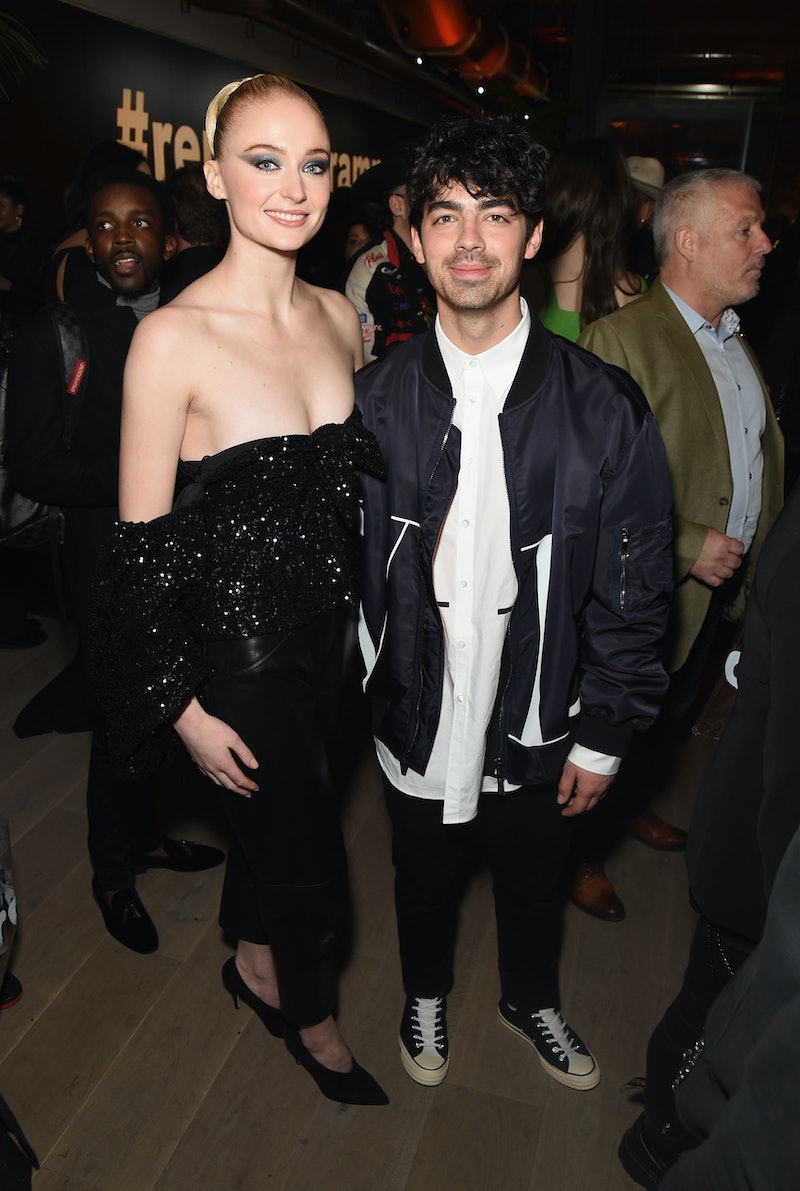 If you really want to throw someone a surprise birthday party, do it a week early. That plan worked out for Joe Jonas at least. Jonas' surprise Valentine's Day party for Sophie Turner actually doubled as a birthday party, and it looks like she had no idea it was coming.

"My Valentine gets a surprise birthday party because she’s the f*cking best," Jonas wrote on Instagram on Thursday. He shared a slideshow of pictures from the surprise party, which featured plenty of red and pink balloons to go along with the Valentine's Day theme.

Turner's birthday is actually next Thursday, Feb. 21, People pointed out. (She'll be turning 23.) So the Valentine-themed party was a bit early, but what better way to combine the two occasions? Turner didn't see the party coming, and Jonas showed his love for his fiancée in a sneaky, but sweet way.

Based on the photos Jonas shared, it looks like a good number of people were at the surprise party. There's one picture of a crowd surrounding Turner with what appears to be a toast, and she's smiling super wide. Jonas' siblings aren't in the photo, but they might have been spending the holiday with their own Valentines.

Turner also shared a Valentine's Day message for Jonas on her page, but she didn't post any photos from the party. Instead, her Instagram post includes a picture of the couple enjoying a sunny day in a park. "Happy Valentine's Day my love. You make me the happiest," Turner wrote in the caption.

As far as the next steps in their relationship are concerned, the couple hasn't confirmed their wedding date yet. But Us Weekly reported in December that Jonas and Turner will get married this summer, in France, according to an unnamed source.

Us Weekly explained that the supposed date first leaked when life coach Mike Bayer shared what looked like a save-the-date on his Instagram. Bayer's video shows a wine box that reads, "Sophie and Joe France 2019." The video was later deleted, though, hinting that the couple might not have wanted to share the details about their wedding just yet. (It's also worth pointing out that there's no confirmation this was actually a save-the-date.)

The Game of Thrones star and DNCE singer got engaged in October 2017. Turner confirmed the news with an Instagram post that got right to the point, writing, "I said yes" and sharing a photo of her engagement ring. Jonas shared the same photo on his Instagram account, too, captioning it, "She said yes."

Turner and Jonas started dating in 2016, but it's hard to pinpoint the exact date, since they've been pretty private about their relationship. They were first seen in public together that November, when they went to a Kings of Leon concert in the Netherlands.

Since getting engaged, the two have attended family weddings together and gone on a holiday ski trip with Nick Jonas and Priyanka Chopra. They've also gotten coordinating tattoos in honor of their respective grandfathers. Clearly, the couple shares a very close bond.

For now, it looks like Turner and Jonas are happier than ever and aren't in a rush to get married. They're enjoying just being engaged, and spending time together with events like the surprise Valentine's Day party. And based on how happy they look in Jonas' new photos, they're sure to be all smiles when the wedding day does roll around.