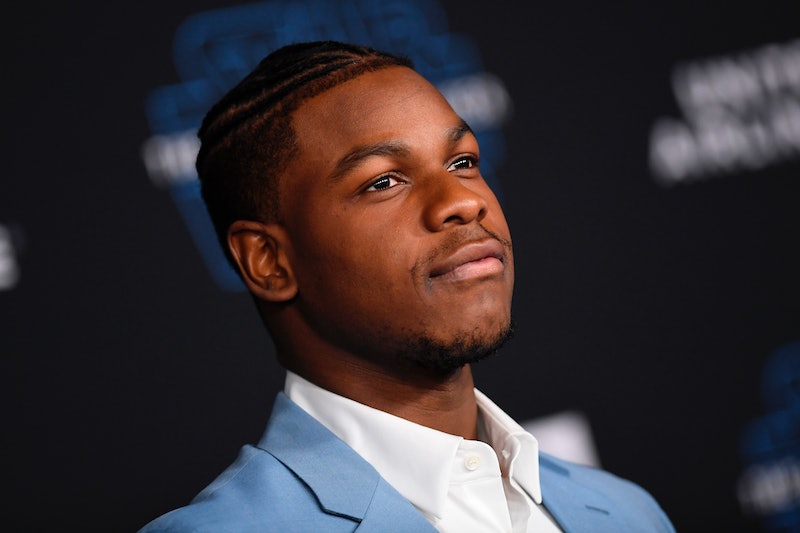 Probably the only thing more prevalent than droids in the Star Wars universe is fan theories. For decades, the Star Wars faithful have pored over every detail of the galaxy far, far away in order to suss out any hidden meanings, and that's especially true when it comes to the latest Star Wars film. The final episode in the main saga raised a number of questions among fans, but at least one has already been answered after star John Boyega debunked a Rise of Skywalker theory.

In the new film, Boyega's character, Finn, tells Rey that he needs to tell her something, but he's interrupted before he can do so in dramatic fashion. While sinking in some alien quicksand, Finn is cut off mid-sentence as he sinks below the surface, leaving the audience hanging as to what he wanted to tell Rey. It's brought up again later, but Finn doesn't spit it out, and the movie ends with him never having revealed his secret to Rey. This omission has left fans to try and deduce just what it was he was going to say, with perhaps the leading theory being that Finn was going to tell Rey he loved her, since it had been implied that Finn had feelings for her since The Force Awakens. But Boyega himself took to Twitter to state once and for all that that wasn't the case.

"No... Finn wasn’t going to say I love you before sinking!" Boyega wrote on Twitter on Dec. 23, prompting a number of responses from fans pitching him their other theories about what Finn was going to say. Boyega himself retweeted a number of joke answers from fans, including Finn revealing that he is Batman and describing his Anakin Skywalker-like hatred of sand, but by far the most popular fan response to Boyega's tweet — and one that the actor did not directly address — is that Finn was going to tell Rey that he's in love with Poe Dameron. The idea of a Finn/Poe relationship has fueled certain corners of Star Wars fandom for years (and inspired its fair share of fan fiction), and Boyega's silence on the issue here may have given some hope to all the Finn/Poe shippers out there. But just because Boyega didn't respond to this particular theory doesn't make it true, as director J.J. Abrams has revealed what Finn was going to say — and it has nothing to do with Poe.

During a recent screening of the film and Q&A by the Academy of Motion Picture Arts and Sciences, a writer who goes by the name Kaila Ren on Twitter reportedly asked Abrams what Finn was going to say. The director revealed that — in his mind — Finn was going to tell Rey that he is force-sensitive, according to Screen Rant, confirming a different long-running fan theory. Finn has shown flashes of the force before (remember when he wielded a lightsaber against Kylo Ren in The Force Awakens?), but The Rise of Skywalker takes his abilities to the next level. Numerous times throughout the film, Finn has "feelings" that turn out to be correct, culminating in his ability to sense Rey's death the moment it happens.

Whether Finn is in love with Rey, Poe, or someone else (maybe Jannah now?) is irrelevant, because the character is in touch with the force. After all, who cares about dating when you can learn how to lift rocks with your mind?