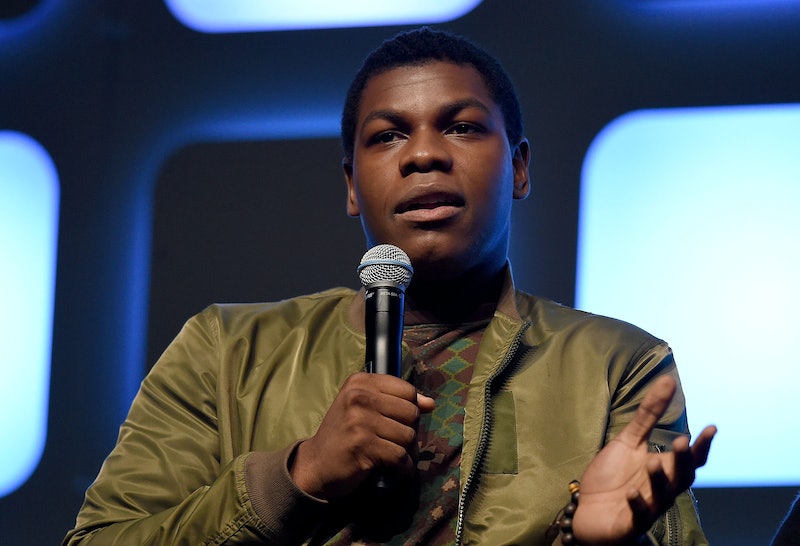 The red carpet isn't only a place to discuss fashion and to meet fans. Actors are also flooded with questions about everything from how their real life affected their role to how their film will impact audiences around the world. However, actor John Boyega noticed a difference in the questions he was asked while promoting Star Wars: The Force Awakens as compared to his co-stars. Celebrated in Variety's Power of Young Hollywood issue, the 25-year-old explained that he was constantly asked about race, diversity, and inclusion following backlash about his casting as stormtrooper, Finn.

"I was the only person to always talk about the color of my skin. In every interview my skin color comes up. If Daisy does an interview, her skin color is not going to come up ... It doesn’t matter what position you’re in — once you’re black, you’re black, and these idiots always have something to say about it."

Granted, conversations about Daisy Ridley's casting as Rey revolved around her being a woman in the lead role of an action film, a budding feminist icon, and a role model for young girls. And one could argue that the reporters who confronted Boyega about the issue were simply following up about the racist controversy. However, with representation being such an issue, why should he be the only one to field questions about race?

The English actor's Instagram account captures his obvious stance on the critical importance of representation of young black men in the Star Wars universe. He has shared photos of black boys either dressed as Finn or posing with Finn action figures to show the impact of seeing a black face not only on screen in a popular film franchise but also in science-fiction. Yet, he shouldn't be the only one to talk about it.

Everyone involved in making a film from the writers to the production assistants should be asked about diversity and inclusion — not just people of color. Shouldn't white actors, directors, and producers raise awareness about the racial disparity in Hollywood just as much as stars and people working behind the scenes who are of color?

Too often entertainers of color are turned to for answers about what can be done to improve diversity and make the much needed changes in Hollywood. However, they are not the powers that be. As director Ava Duvernay said at the 2016 Sundance Film Festival, "There's a belonging problem in Hollywood. Who dictates who belongs? The very body who dictates that looks all one way."

A 2016 study from the University of Southern California found that 87.3 percent of film directors were white and only seven percent of films included a cast whose race reflected America's vastly diverse society. The study states, "The film industry still functions as a straight, white, boy’s club."

Although some stars of color may occasionally attain a highly coveted role such as Finn, craft a screenplay that turns a beloved film franchise on its head, or create their own lane entirely, more white executives, actors, producers, and casting directors need to be sought out to confront issues of race and lack of diversity.

The USC study mentions that working toward resolving this disparity starts with expanding our view. "Inclusivity requires creating an ecosystem in which different perspectives hold value and stories represent the world in which we live."

Boyega's perspective on race certainly holds value in Hollywood. Feeling like the go-to black guy to answer all the black questions must get old. Widening the answer pool to white actors (or directors, or writers, etc.) who don't typically discuss race would make for a much more insightful red carpet. If we want a more diverse Hollywood, we can start by asking everyone the tough questions.

More like this
Owen Thiele Asked Sundance Attendees About Films That Don’t Exist
By Grace Wehniainen
24 History-Making Black Women You Probably Didn't Learn About In School
By Ayana Lage and JR Thorpe
At 28, Rosie Perez Risked Her Career To Stop Playing Stereotypes
By Gabrielle Bondi
'Brookside' Is Coming Back & Soap Opera Fans Are Going Wild
By Sam Ramsden
Get Even More From Bustle — Sign Up For The Newsletter
From hair trends to relationship advice, our daily newsletter has everything you need to sound like a person who’s on TikTok, even if you aren’t.