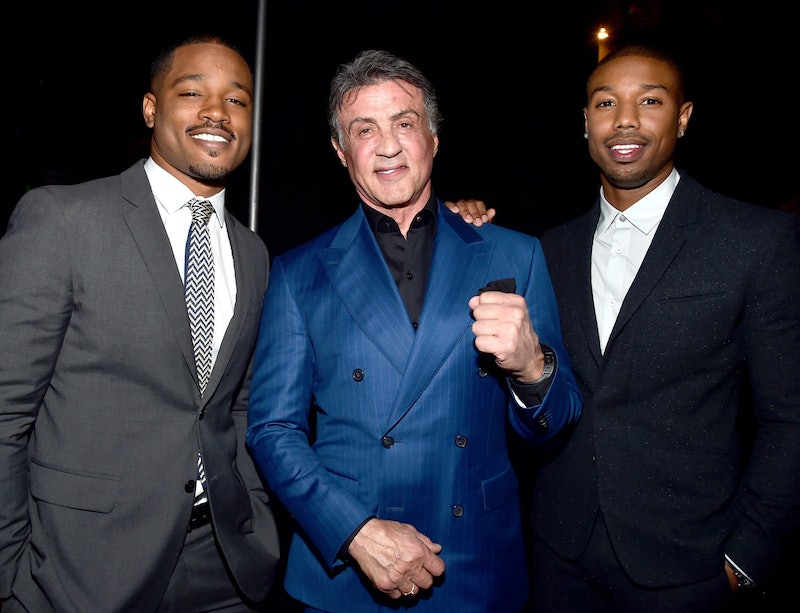 With one movie after another, director Ryan Coogler is changing the landscape of modern cinema. At only 29, the filmmaker has provided American audiences with two painfully timely and personal films — Fruitvale Station (2013) and this past month's Creed . Going from making an independent film on the 2008 death of Oscar Grant to a Hollywood franchise spin-off is a surprising career move, to say the least, but it's also highly impressive, given the fact that Fruitvale Station was Coogler's first feature film. In just a few short years, the director has carved out a career for himself as an authentic and versatile filmmaker who can make both poignant indies and blockbuster sports films without compromising style or story. And, with a talent that makes moviegoers jump in their seats with awe, there's no doubt Coogler is on his way to becoming one of the best contemporary film directors at work.

First, there's his talent for visual style. When you think of the legacy of a director, a few things come to mind, with signature camera work (i.e. David Fincher and his dramas) and specific genres (i.e. Martin Scorsese and gangster movies) standing out. Yet with Fruitvale and now Creed , Coogler has shown that he will not be defined by either category, or even how his films appear to audiences. Because despite being directed and written by the same man, Fruitvale Station and Creed look almost nothing alike.

Fitting their drastically different storylines, the cinematography and shooting style of the two films are completely different. For Creed, to match the Rocky legacy and perhaps a Hollywood budget, Coogler traded in the handheld camera used so memorably in Fruitvale for more structured tracking shots, giving the movie a slightly glamorous look fit for the world of boxing. This is due in part, of course, to a change in cinematographer — Rachel Morrison worked on Fruitvale Station, while Maryse Alberti was called in for Creed — but it's also a testament to how dynamic a director Coogler is. Many acclaimed directors (Tom Hooper, for instance) are known for keeping one distinct style of shooting despite a wide breadth of material covered in their films, but Coogler is proving that he's capable of adapting his style to fit the subject of each film.

And even when he sticks to his formula, he still stands out from the pack. Both Fruitvale Station and Creed place emphasis on Coogler's love of long takes, whether that means lingering on an actor's close up without cutting while another character is speaking, or crafting the most elegant, one-take fight scene in recent sports movie history. This style of filming is startling and effective, and it separates Coogler from the pack of mainstream Hollywood directors who tend to favor short scenes and a traditional shot-reverse shot structure.

Then there are his storylines. Coogler's films have several common threads, perhaps due to the fact that the director also writes his own scripts. Both Fruitvale and Creed place a focus on diversity and race, and the two films also explore themes of family, masculinity, fatherhood, and our shared humanity. They even share a leading man in Michael B. Jordan, and with him, Coogler has found the perfect actor to help carry his films and give them heart. In return, Coogler has given Jordan his best roles yet, and helped him produce powerful, memorable performances. The duo's relationship has proved so successful that they're already working on their next project, the drama Wrong Answer, and it's clear why they've formed such a bond; s peaking to Time recently, Coogler said that he "sensed immediately" that Jordan was right for Fruitvale Station, even writing the script with him in mind. In the time since, their collaboration has provided audiences with two astounding films.

Coogler's desire to work closely with actors doesn't only result in superb performances from Jordan, however. His films are also littered with great work from supporting players — Sylvester Stallone, for instance, is currently generating Oscar buzz for his work in Creed. Coogler crafts fully-formed individuals, no matter how small, and to ensure that his characters are more than just plot decoration, he allows his films to spend time on short sequences that other filmmakers would no doubt cut for time. Take all the scenes of Creed's Bianca (Tessa Thompson) singing or sharing her stories, for instance, or the fact that Fruitvale's Wanda (Octavia Spencer) has so much screen-time, despite the movie primarily being about her adult son. Instead of making these characters simply "girlfriend" or "mother," Coogler ensures that they have plotlines and relationships of their own.

In the world of film theory, there is a term used for directors who appear to be in complete creative control of their films: an auteur. The idea has lost much of its meaning over time, and these days, it's thrown around far too often. Yet with Fruitvale Station and now Creed, Coogler has proven that he's deserving of the title. He's an auteur for the current generation — and I cannot wait to see what he does next.

More like this
Yes, You Can Stream ‘To Leslie’ In The UK Now
By Sam Ramsden
Your Guide To Watching 'Everything Everywhere All At Once' In The UK
By El Hunt and Sophie McEvoy
Another Side Of Rupert Grint
By Maria Sherman
Pamela Anderson’s Dating & Marriage History Could Be Its Own TV Series
By Jake Viswanath
Get Even More From Bustle — Sign Up For The Newsletter
From hair trends to relationship advice, our daily newsletter has everything you need to sound like a person who’s on TikTok, even if you aren’t.