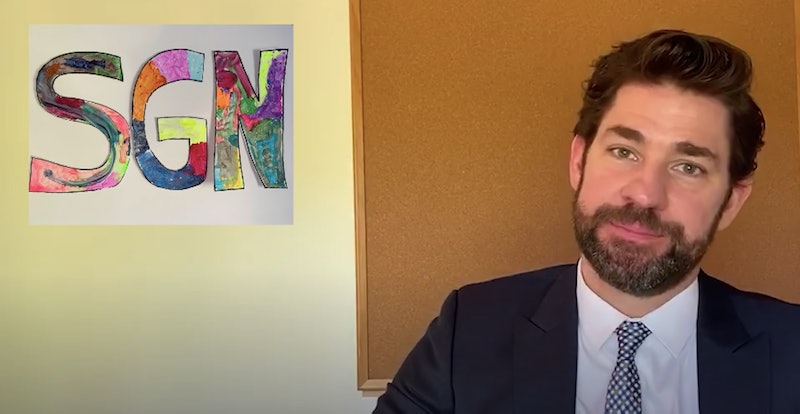 Many John Krasinski fans did not think that the sale of his hit YouTube show Some Good News was, well, good news, but the Office star is assuring everyone that there's nothing to worry about. John Krasinski defended selling Some Good News to ViacomCBS, after some fans branded him a "sell-out" for moving the show from its online home to a major news network, without him serving as the host this time around.

While appearing on Hey There, Human, an Instagram Live series hosted by his Office co-star Rainn Wilson, on Tuesday, June 26, Krasinski explained that he had planned on filming only eight episodes of SGN in quarantine due to his previous writing, acting, and directing commitments. His options were to give up the show completely, or sell it to keep it going. "I would love to keep doing the show from my office forever," he said. "It just wasn't sustainable."

Although he won't be able to host the new show permanently, Krasinski will stay on as an executive producer, and promised that he will be involved as much as possible. "We have a lot of really fun stuff planned, and I can't wait to dig in," he said. "I'm going to be a part of it whenever I can, and I'm going to host a couple [episodes] and bring on a different community of people. But we're really, really excited about it."

Over the weekend, Krasinski also clarified that SGN would be available to everyone on the CBS network, not its premium paid subscription service, CBS All Access. "Have a bunch of fun stuff planned with CBS network!," he confirmed on Twitter. "SGN for everyone! See you soon!"

The YouTube episodes of SGN saw Krasinski focus on good news amid the coronavirus pandemic. This included highlighting fan videos, hosting major reunions and inviting celebrity guests to help celebrate special occasions like prom and graduation. Over the weeks, he officiated a wedding ceremony via Zoom, complete with an Office cast reunion, and had Lin-Manuel Miranda perform with the original Broadway cast of Hamilton for a young fan's birthday. The final episode of Some Good News, dedicated to the fans, was posted on May 17.

Although Krasinski will no longer be the sole host of the show, SGN will always be something that he's proud of. "I've received the most amazingly kind notes about how much that show meant to everyone, but the truth is, it meant no more to anyone than me," he told Wilson. "That's probably the most emotionally fulfilled I’ve ever felt in my entire life." Hopefully, his dedication will be reflected whenever the show returns.