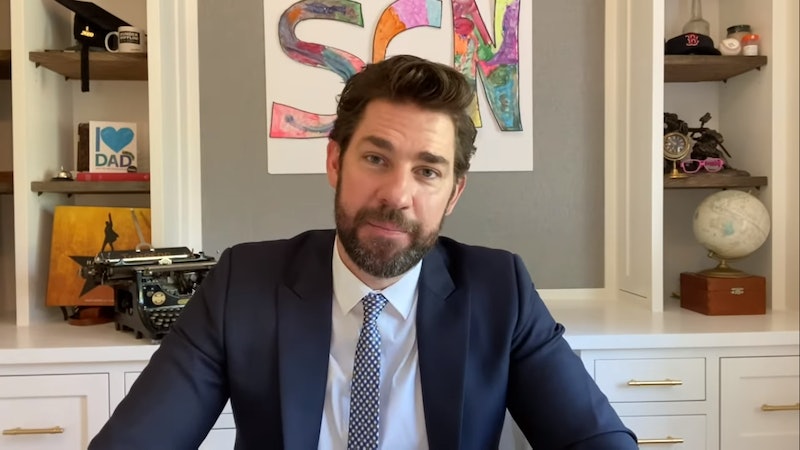 It was goodbye for now on Sunday as John Krasinski ended Some Good News with an episode dedicated to the fans who have made his chat show their own. The Quiet Place director indicated the show could return, but after eight episodes, Some Good News will be taking a break. Though it's clear from the many segments highlighting viewers who have started their own versions of Krasinski's good-news-themed series that people won't have to look far the next time they need to be uplifted.

From reuniting the cast of The Office to hosting a virtual prom for seniors who missed out on their own due to the ongoing coronavirus pandemic, Some Good News has been a constant source of comfort for viewers stuck at home, but it seems it's been just as important to Krasinski. "Well, on a very personal note, I can tell you that I will never be able to properly articulate just how much this show has meant to me and what a tremendous honor it has been to share in all of it with you," the visibly emotional host said.

Krasinski went on to say that he's been "blown away by the messages" from people sharing the joy that the show has brought them. But he wanted to leave viewers with a reminder that there's always good news to be found, with or without his YouTube series. "I told you from the very first episode, I only deliver the good news," he said. "You are the good news."

While the episode was undeniably emotional, it also had plenty of uplifting moments, including bloopers from throughout Some Good News' first season. Highlights included sound troubles for... well, everyone: Krasinski making Steve Carell crack up simply by existing and Renée Elise Goldsberry's phone insisting on making her appear sideways as she prepared to perform for the Hamilton reunion. In addition to the bloopers, Krasinski also had one more piece of good news to share with people before signing off, and that was how they can give to COVID-19 relief efforts.

During the episode, Krasinski shared some of the amazing Some Good News fanart that has been created since the show began. He then announced that many of those talented artists have agreed to have their art used on Some Good News merchandise, with all of the proceeds going to "the cause of your choice," per the official website. Additionally, the Jack Ryan star added that the Starbucks Foundation will match the first $1 million in donations made.

Some Good News may be over for now, but Krasinski is determined to keep the positivity flowing. "For this episode of SGN, I'm John Krasinski no longer needing to remind you that no matter how hard things get, there is always good in the world," he said as he signed off, getting a bit teary-eyed. "Thank you all for making this show so very special. We will see you again."

More like this
Netflix Shut Down 'Bridgerton' S3 Rumours About A “Very Dark” Storyline
By Bustle
'The Queen’s Gambit' Season 2 Tweet Wasn’t From Anya Taylor-Joy
By Mary Kate McGrath, Jack Irvin and Grace Wehniainen
Bill & Frank’s 'The Last Of Us' Episode Has Twitter Emotionally Wrecked
By Alyssa Lapid
'The Last Of Us' Episode 4 Put Twitter Into An Emotional Spiral
By Alyssa Lapid
Get Even More From Bustle — Sign Up For The Newsletter
From hair trends to relationship advice, our daily newsletter has everything you need to sound like a person who’s on TikTok, even if you aren’t.