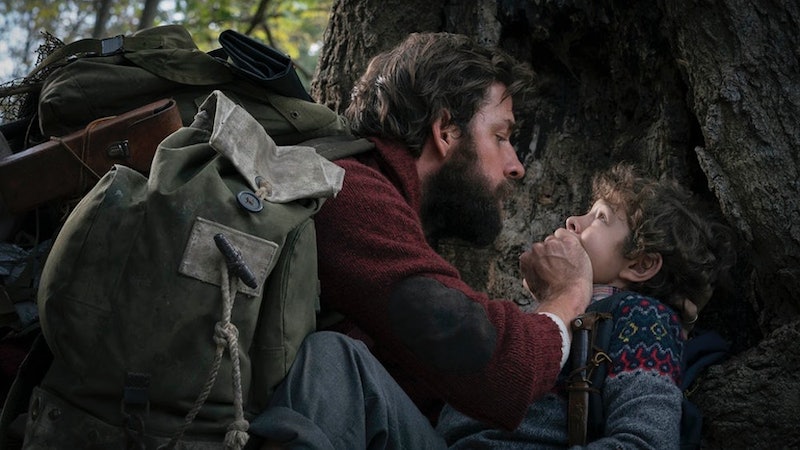 Horror movies are sometimes best when they're loud and chaotic, but 2018's surprise hit A Quiet Place thrived on the fact that there wasn't much sound at all. In fact, there was hardly any dialogue. But that didn't stop the movie from becoming a major hit, a modern horror staple, or from scaring the pants off many who watch it. Now over a year after the film's release, John Krasinski's A Quiet Place 2 photo teased filming has begun on the sequel. So get ready to be scared silent once again.

On Monday, July 15, Krasinski a picture on Twitter and Instagram of A Quiet Place 2's clapperboard from the very first take of the very first scene of the sequel. The sequel doesn't have an official title yet, but the board says "Part II" and so does the hashtag he wrote in the caption, so that's probably a good hint.

Just like with the first film, Krasinski is directing and writing the script (he was a co-writer on the last film). Emily Blunt, who starred alongside her husband in the first film, will reprise her role as Evelyn in A Quiet Place 2, the matriarch of the family. The actors that played their children — Millicent Simmonds and Noah Jupe — are also reported to return, according to IndieWire. And, spoiler alert, if you saw the first, then you know Krasinski will just be back as a creative, not on screen (unless they do flashbacks of some kind).

Though not much is known about the sequel, there are a few details about how the Quiet Place sequel will continue the story of the original. Back in a Dec. 30 interview with Deadline, Krasinski shared info on the sequel. He said,

"I'm writing now — I don't have it fleshed out — but the thought that occurred to me, that really excited me about it, was that most sequels are about the return of a hero or a villain. You take this character that people loved once and you bring them back, and you have to create a new world around them. We have the exact opposite setup."

By "opposite setup," he likely meant that viewers shouldn't count on getting another story centered around Blunt's character and her children. The fact that the actors have signed on to return suggests they will definitely be involved somehow, but in his December interview, Krasinski insisted that this sequel is going to focus on another group of people surviving through the catastrophes created by these sound-sensitive monsters.

"The reason I decided to go back, in the end, was this world is so rich, and it's so much fun to explore," Krasinski told Deadline. "There are so many different things to see now. Everyone else in the world is experiencing this, so I'm curious to see what that looks like from another perspective."

Not much is known about what this new perspective will entail. Brian Tyree Henry is reportedly in talks to join (If Beale Street Could Talk) the sequel, according to a June article from The Wrap. And Cillian Murphy was also reported to be joining the cast, per The Hollywood Reporter. Other than that, all fans know is that A Quiet Place Part II is set for a March 20, 2020, release date.

With filming already starting, hopefully fans will get more information in the coming weeks.

Editor's note: this article has been updated with the correct release date for A Quiet Place Part II.