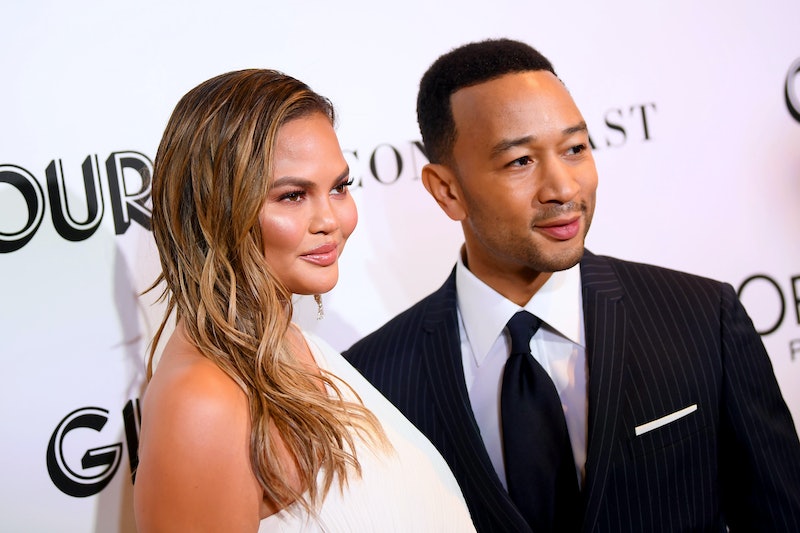 John Legend has a (very innocent) bone to pick with the Queen of Twitter, aka his wife, Chrissy Teigen. According to Just Jared, John Legend discussed Chrissy Teigen's Twitter antics on a recent episode of The Ellen DeGeneres Show, which is set to air on Feb. 19. He revealed that his wife runs some tweets by him but, when it pertains to him, the always-hilarious Lip Sync Battle host can get a bit "devious."

Legend told host Ellen DeGeneres that Teigen doesn't exactly give him a heads up when it comes to any tweets related to him. “She runs some tweets by me but she never runs the ones when she’s talking about me, by me,” he said. But, if you thought that the singer was at all peeved about the lack of a heads up, you might want to think again. Like everyone else, he's totally here for his wife's hilarious tweets, even if they're about him. He continued to say:

“We’re next to each other on the couch and she has this devilish look on her face, like she’s conniving some kind of devious plan and the tweet will go out and I’ll just look at her like, ‘Ha ha yeah that’s funny…’ She’s funny!”

It's nice to hear that Legend has a good sense of humor about Teigen's tweets. Considering how strong their relationship appears to be, it's no surprise that the couple's able to keep things lighthearted and fun, especially when it comes to their social media shenanigans.

Teigen and Legend's Twitter antics were on full display most recently on late Feb. 17. In case you weren't aware, you missed the Great Totino's Debate of 2019. The Lip Sync Battle host started things off by saying that she told her husband that she wasn't going to bring up the matter on Twitter. But, in her own words, "I lied here goes."

Teigen explained to her followers that she was craving the kind of pizza she had during her "childhood" with some sliced tomato on top, so the couple decided to order some Totino's via Postmates. However, there was a bit of miscommunication about what exactly Totino's pizza entails.

She went on to say that they went back and forth about the proper way to heat up the pizza before their delivery arrived. Once it did arrive, they realized that they had totally different ideas of what a Totino's pizza meant, as Legend had ordered pizza rolls. Teigen was "blown away" by the whole ordeal and was shocked to hear that her longtime love didn't know that Totino's made actual pizza and not just rolls. (In his defense, I, and many others who commented under the thread, had no idea that Totino's made actual pizza and I feel forever changed.)

She went on to joke about the whole thing, saying that the couple was having "an actual fight" about the situation. But, seeing as though she got her classic pizza with tomato on it in the end, it's clear that all is well in the Teigen/Legend household once again.

Given his recent comments, and Teigen's own tweets about the pizza drama, it's safe to say that she didn't run this latest thread by him before posting it on Twitter. But, considering the hilarity that ensued in just this one Totino's debacle, Legend is probably laughing right along with his wife's tweets about the whole matter, just like all of the couple's adoring fans.