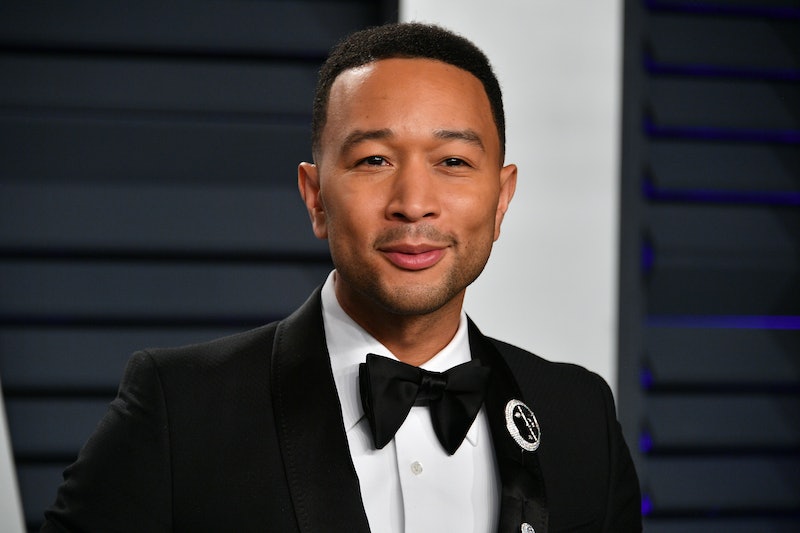 If you, like me, have the opening hours of every cupcake place within three miles of you memorized, but also respect your body's wishes when it craves a vegetable, then the new "However You Healthy" campaign from Naked has your back. The campaign, launched in conjunction with Naked's Half Naked Juice, is all about making choices — big or small — that are healthy for you, and understanding that it means a broad range of things for different people. Among those people is musician and activist John Legend, who partnered with Naked for the campaign.

In an Instagram video for the campaign, Legend confessed that one of his choices is eating salad for breakfast (which makes me more curious about the upcoming recipes for Chrissy Teigen's food site than ever). Over the phone, he spoke with Bustle about what the "However You Healthy" campaign means to him and his family.

"I think it means taking whatever steps you can to live a healthier life, and a lot of those steps can be small," Legend tells Bustle. "We talk about exercise, we talk about eating more vegetables. You're talking about getting more rest, drinking more water. All those may seem insignificant, but start to add up after a while."

The campaign also acknowledges, though, that the real virtue of making healthy choices lies in making choices that are meaningful to individuals, and that health is more choose-your-own-adventure than one-size-fits-all.

Along with the campaign, Naked launched Half Naked Juice, the latest in its expansive juice lines. The new juice, called "half" naked because it has 50 percent less sugar than comparable juice smoothies, comes in three flavors: Lively Greens, Peach Ginger, and Watermelon Passion Fruit. Per Naked, the drinks contain no artificial sweeteners or preservatives and are never diluted, packing a flavorful punch. The juice recently hit stores nationwide, so you should be able to find them in the refrigerated aisle with the rest of Naked's many juice lines.

But, just as there must always be balance in the Force, so must there be in your own life — and the same goes for Legend's, as well. Given that he is married to model, author, activist, and Patron Saint of Delicious Food Chrissy Teigen, Bustle asked Legend if he thinks there's a dish that he makes better than Teigen. It turns out there are two: Mac and cheese and fried chicken.

Whatever exactly makes his fried chicken superior remains somewhat of a mystery — Legend tells Bustle that that it's a combination of being "seasoned just right" with "no frills" — but the point remains that food is a joyful (and occasionally deeply competitive) affair, something that the "However You Healthy" campaign celebrates. And something I am personally hoping will manifest in a fried chicken face-off during the next John and Chrissy television special (Fourth of July, anyone?), with plenty of juice on hand to keep everyone hydrated throughout.