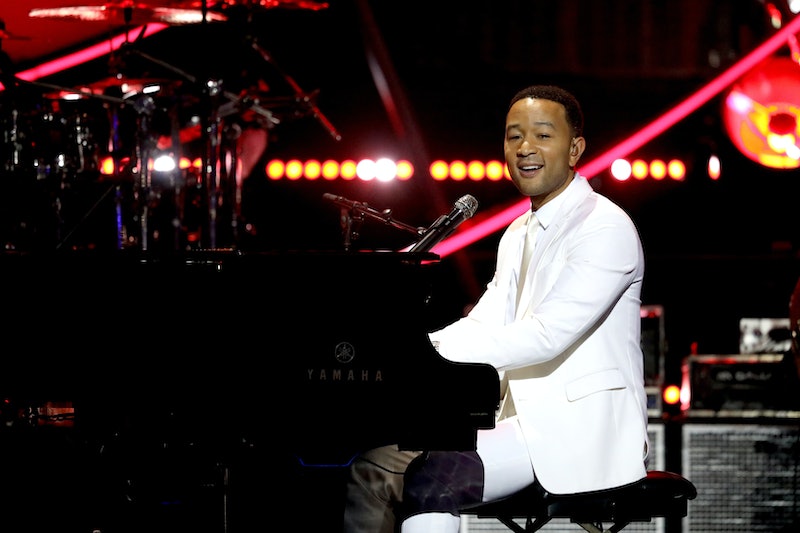 The Pearson family is about to get a visit from a real-life EGOT winner: During the Golden Globes on Sunday night, a new promo revealed John Legend will guest star on This Is Us when it returns on Jan. 14. His guest appearance was apparently so secretive that even his wife, Chrissy Teigen, has no idea if he's playing a character or himself. When a fan asked her to spill the details on the "All of Me" singer's guest appearance on Twitter, Teigen responded, "I had no idea until now and still don't get it? his song or himself?"

Clearly, Teigen doesn't have the spoilers This Is Us devotees crave, so for now, there's only the promo to go on — and it's not available online yet. The one thing the midseason teaser did confirm is that Legend will (probably) be performing on the show, since he's seen sitting behind a piano. Given the time-hopping nature of the series, he could be in the present day serenading Kevin as he continues his search for love, in the past using his Voice coaching skills to inspire Rebecca, or even in the future preparing to collaborate with the all grown up baby Jack.

But even though he's shown behind a piano, that doesn't necessarily mean that The Voice coach is playing himself. While Kevin's connection to Hollywood makes it easy for celebrities to play themselves (see: Seth Meyers), Legend has proven that he has serious acting chops. He's previously appeared in La La Land, Underground, American Dreams, and other high profile projects.

Legend and NBC are keeping mum on the details for now, but there's no denying that the singer is an exciting guest star in a season that's been full of stellar celeb appearances. In addition to Legend, Season 4 has already featured visits from the likes of M. Night Shyamalan, Omar Epps, Phylicia Rashad, and Timothy Omundson.

Aside from Legend's guest appearance, the midseason teaser also previewed that Kate and Toby are still having trouble connecting as new parents. Kate is seen asking Toby, "I feel you pulling away. Am I crazy?" Elsewhere, Randall and Rebecca make a trip to the doctor to get an official diagnosis about her memory issues, and Kevin puts his plan to fall in love and have kids before his 40th birthday into action.

With the Pearsons facing even more drama than usual, a visit from a crooning John Legend in any form will be a welcome distraction for the beleaguered family.