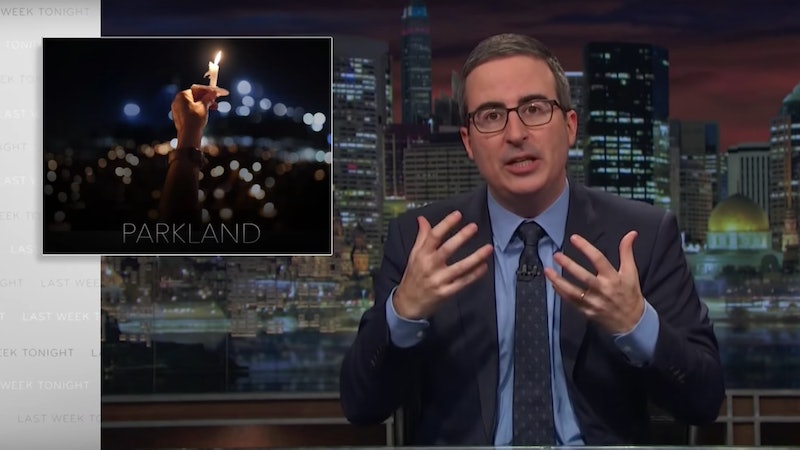 John Oliver was back in the swing of things on Sunday night, and he had to start with an all too tragically familiar topic: a mass shooting, this time the one that took place at Marjory Stoneman Douglas High School, killing 17. John Oliver's segment on the Parkland, Florida, shooting wasn't limited to only his own thoughts, however. Instead, he used his platform to raise up a different set of voices: those of the survivors and the victims' friends and classmates.

"These events are now so familiar, we basically automatically know how each side will play out," Oliver said in his introduction.

This time, Oliver had a significant change in the narrative to take note of. "When the now's not that time argument came out, the kids from that school said, 'You know what? Yes it f*cking is,'" he said.

He then showed clips of some of the Stoneman Douglas students who have gone on television to talk about the tragedy and the policy changes that they believe must follow, including a clip from the moving speech by Stoneman Douglas school president Emma Gonzalez.

"They say that no laws could have been able to prevent the hundreds of senseless tragedies that have occurred — we call BS!" Gonzalez said in her speech, appearing to wipe away tears. "That us kids don't know what we're talking about, that we're too young to understand how the government works — we call BS!"

"We call BS," Oliver cut in, repeating Gonzalez's chant. "It is a little ironic that the people who are acting with the most maturity in this horrifying situation aren't even old enough to say the word 'bullsh*t' in front of their parents."

He then mentioned the March For Our Lives that the school shooting survivors are planning for March of 2018, which segued to a discussion of how difficult it's going to be for the kids behind this movement to actually start a conversation that could lead to action.

"They will be up against it," Oliver said, before showing a clip of a Republican commentator on CNN answering a question about whether he thought these kids' concerns would register in the minds and priorities of Republican politicians.

The commentator, Andre Bauer, was dismissive of the kids' pressure so far, saying that gun violence is merely an issue of culture and when he grew up, they "had Andy Griffith" and kids driving to school with guns, but no mass shootings. He cited the "movie industry, the rap industry" as drivers of the discussion and said that they've desensitized society. "Now we have to worry about kids eating Tide Pods," he finished.

If that left you a bit confused, then you're not alone.

"What?" Oliver said, incredulous. "I call BS on that!" He then pointed out at least one factual error that Bauer had made in his answer, when he implied that the Andy Griffith Show supported a culture of safe gun ownership. But Oliver had a clip for that — specifically, a clip of Sheriff Andy Taylor from the show explaining that he didn't carry a gun, because he wanted to be respected as a person and not feared because of a weapon.

The last week has proved, yet again, that it's a difficult world out there, and that the news can be hard to stomach. Now that John Oliver's back on the air, though, at least you've got a friendly face to help you through it at the end of every week.