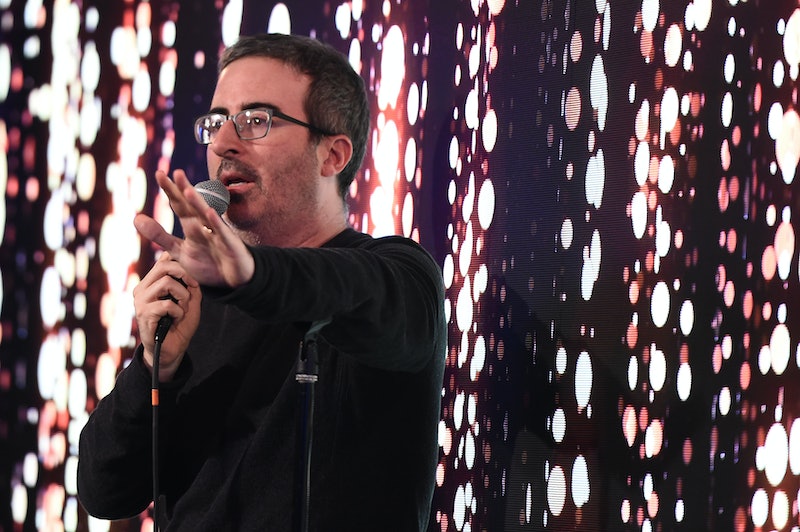 After a week filled to the brim with news about various states attempting to seriously restrict abortion access, a beloved TV host took the opportunity to warn his viewers that all of those new laws are part of a bigger plan. John Oliver's abortion legislation segment from Last Week Tonight goes beyond humor to point out not only what he finds ridiculous in the states' efforts to limit abortion access, but also how he sees a greater danger in those states' efforts.

He opens by talking about the so-called "heartbeat bill" recently signed into law in Georgia, which bans abortions after six weeks and which is set to go into effect in 2020. He explained the basics of the bill, saying that it gives "natural person" status to embryos at six weeks and only includes exceptions for fatal fetal deformities, the life of the mother, or cases of rape or incest as documented by a police report.

For starters, "fetal heartbeat" is a completely nonsensical term scientifically, as the Huffington Post explained; while cardiac activity in an embryo begins around that time, nothing like a heart has actually developed. And furthermore, the presence of a heartbeat doesn't mean that the embryo will even end up being viable.

As Oliver explained, though, the Georgia bill not only treats the embryo as viable at that point — it also treats it as a person who could receive child support or be claimed as a dependent for tax purposes.

“'Tax breaks begin at conception’ may be literally the most Republican law ever created," Oliver said, per Vanity Fair.

He then alerted his audience to a clip of a Georgia representative arguing in favor of the bill, in which she claimed to be giving voice to "Baby Fetus."

"She explicitly says she’s speaking not on behalf of a fetus, but on behalf of a baby whose name is Fetus," Oliver said. "Then she’s somehow quoting this made-up baby, Fetus, despite the fact that babies can’t speak or write, so she has no source material from which to quote."

Oliver then went on to describe similarly draconian abortion legislation elsewhere, like in Alabama or Ohio. And as he then pointed out, these bills are all rolling in right now for a reason.

“If you’re sensing a pattern here, that might be because just this year, states have introduced more than 250 bills restricting abortion access,” Oliver said. “It’s pretty clear now with a conservative Supreme Court, lawmakers are taking every shot they can to get a case that might end up overturning Roe v. Wade. And they’re gonna keep trying. Which is why it is incumbent on all of us to pay close attention to this issue.”

More people than just Oliver have made this claim, like for example the LA Times: the recent slew of anti-abortion legislation has the singular goal of overturning Roe v. Wade, and anti-reproductive rights activists see the current Supreme Court as the prime moment to do that. He finished the segment by arguing against those who would limit reproductive rights using a now-familiar voice: Baby Fetus.

“Listen, I’m not a constitutional scholar—I’m not anything—but if I were, I’d tell you that laws like these deny women agency over their own bodies, and your actions put their health and lives at risk," Oliver said. "But hey, why not ask the women affected what they think? Because they’re actual people, unlike me, a f****** fictional baby named Fetus."

More like this
Romance Authors Are Mobilizing For Reproductive Rights
By Natalia Perez-Gonzalez
Chris Kaba's Family Continue Fight For Justice After Viewing Police Bodycam Footage
By Sophie McEvoy
Women Around The World Are Cutting Their Hair In Solidarity With Mahsa Amini
By Darshita Goyal
Black History Month UK’s 2022 Theme Calls For Action, Not Words
By Maxine Harrison
Get Even More From Bustle — Sign Up For The Newsletter