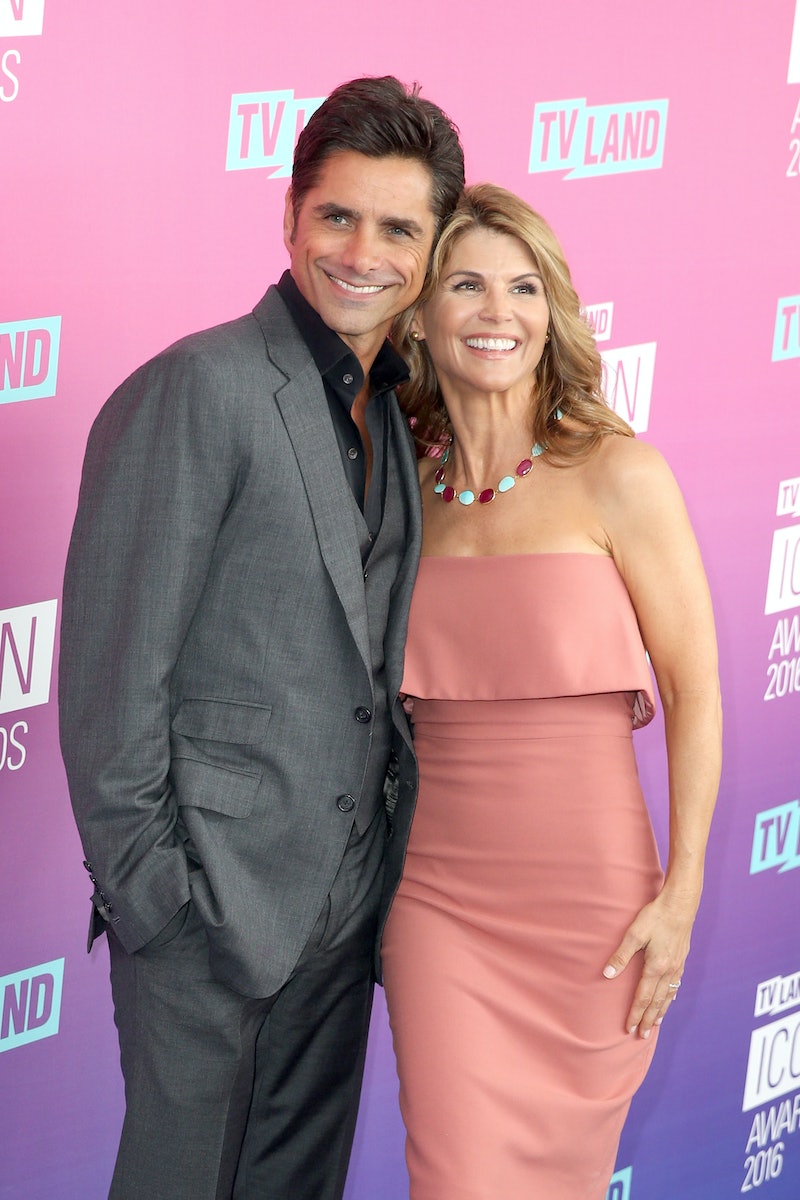 Uncle Jesse is still ride or die for Aunt Becky. In a new interview with GQ, John Stamos commented on Lori Loughlin and the college admissions scandal, although he mentions that he probably shouldn't comment on the allegations against his Full House co-star. “I gotta be careful,” Stamos told the magazine. “I want to wait until the trial happens, if it does, or whatever the result is, and then talk about it.”

But, Stamos couldn't help but talk about Loughlin's current predicament, even if he prefers not to speculate on the case. Back in March, Loughlin and husband Mossimo Giannulli were indicted in the college admissions scandal, along with nearly 50 others who were accused of alleged bribery to get their children into elite colleges or universities, the New York Times reported. Loughlin and Giannulli were accused of allegedly paying $500,000 for their daughters, Isabella Rose and Olivia Jade, to be admitted to USC on crew scholarships despite neither having played the sport. In April, Loughlin and Giannulli both plead not guilty to charges of fraud conspiracy and money-laundering conspiracy.

Stamos said that he and Loughlin are still close friends so this whole thing has been weird for him to see play out. "And I'll tell you one thing that has been strange is: Honestly I can't figure it out," he told GQ. "It doesn't make sense. I talked to her the morning everything hit. I just can't process it still.” He added, "Whatever happened, I'm pretty sure that the punishment is not equal to the crime, if there was a crime.”

While many others involved in the scandal, including actor Felicity Huffman agreed to plead guilty, Loughlin and Giannulli declined a plea deal in April. The couple could face a prison sentence of up to 20 years if found guilty, according to the Federal Criminal Law Center.

On Aug. 27, Loughlin and her husband appeared in a Boston court to officially waive their rights to separate attorneys, according to People. While in court, a lawyer representing the couple stated that payments were allegedly never made to University of Southern California employees and that Loughlin and Giannulli reportedly believed the donations made to admissions consultant William “Rick” Singer were charitable, per People.

Back in June, Stamos would not confirm nor deny whether Loughlin would appear on Fuller House's fifth and final season. "I haven't been on the show yet and it hasn't come up," he said. "So I'm going to talk to some people about it this week and see what's going on. I'm just going to wait a little longer before I talk about it." He added, "It's a difficult situation for everyone involved. I don't mean just on our side."

Following news of the scandal, Hallmark broke ties with Loughlin, who starred in the network's series When Calls the Heart. But Loughlin's future with Fuller House has been up in the air. In early June, Candace Cameron Bure told ET, "It hasn't been discussed. I have absolutely no answer for it, and Netflix has not even spoken about it, so I have no answer."

As of now, Olivia Jade might have made her feelings the most clear about the scandal. Earlier this month, Olivia posted a photo flipping off the camera on Instagram. She was wearing a Snoop Dogg t-shirt and a big smile.