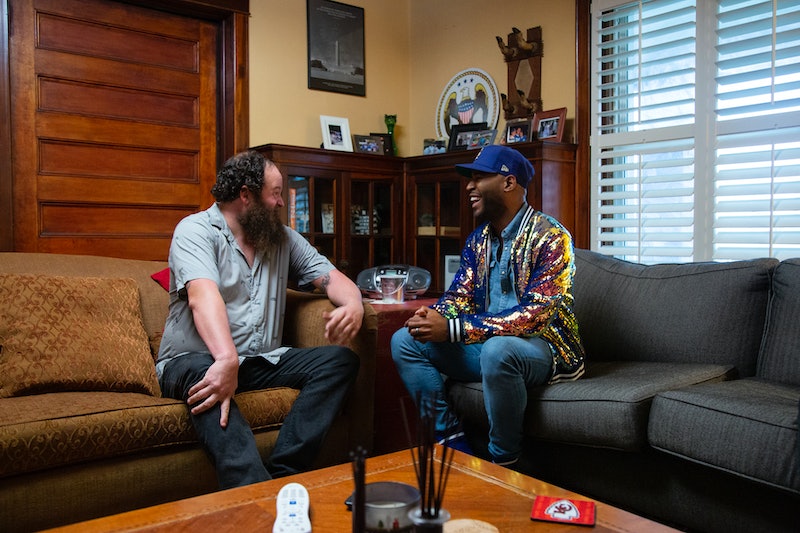 Queer Eye has always been about helping people feel their best. Whether that means a wardrobe overhaul, a new hairstyle, or giving someone the tools to work through their personal obstacles, the Fab Five can usually at least begin to set someone on a path toward self-betterment. Season 4 is no exception — particularly when it comes to Queer Eye hero John, who has a candid, illuminating conversation about his depression with Karamo.

John is a single dad who co-parents his adorable little girl, Lucy, with his ex-wife, who remains his close friend and supporter. He's in the same boat as a lot of the people on Queer Eye — he's a little disheveled, and he hasn't been making enough (or any) time for self-care. He admits to Karamo that he checked out of parenting Lucy a little earlier than he should have because she seemed independent and capable, and he was dealing with his own problems. Eventually, hr reveals that he's been living with depression for quite some time, but hasn't felt that he could talk to anyone about it.

"You know, I could smile through it," he says. "I was smiling, doing hard work or whatever I'd keep smiling through it. But that doesn't always tell you what's going on back behind everything. They don't see you when you're laying in bed for a couple days in a row. Even getting up to go eat would be a burden."

John adds that he felt some people just assumed he was "lazy" because he was in bed so often or seemingly didn't do that much around the house, which is a frustrating misconception about people living with depression.

This is important for a few reasons. For one thing, it highlights the challenges of being a parent while living with depression — something we don't often get to see on TV. Shows like You're the Worst and BoJack Horseman have helped showcase honest (and accurate) depictions of depression, but they center around characters without children. So while we only get to hear a small portion of John's story, it still helps to move the needle forward. According to the National Center for Biotechnology Information, depression is currently associated with "less positive" parenting, and there's significantly less research about how depression impacts fathers, like John, than mothers — despite the fact that, per Mental Health America, it affects more than 6.7% million adults each year. The fact that John was so open with Karamo about his experience should help open a dialogue about other parents dealing with mental illness.

Of course, John's episode also helps to further conversations we've already been having about mental health and depression: that you shouldn't make judgments about people when you don't know what they might be experiencing personally, and more specifically, that we need to continue to destigmatize reaching out for help. When John later tells his ex-wife what he's been going through, she's incredibly supportive, saying he can talk to her and that they're "a family of three." By the end of the episode, it seems as if a weight has been lifted off of his shoulders. Hopefully, seeing his story will do the same for others watching.