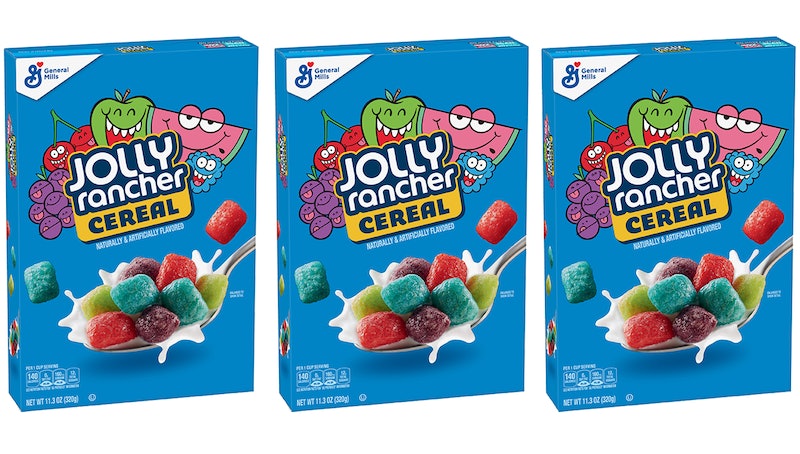 If you’re looking for an absolutely buckwild way to start your day, look no further than Jolly Rancher Cereal, a thing that apparently exists now. It’s breakfast cereal inspired by the fruity hard candy, Delish reports, and it’s everything you childhood self craved from a morning meal. (Dentists and parents who’ve said “candy isn’t breakfast,” you might want to look away for this one.)

The Jolly Rancher Cereal comes courtesy of General Mills, the company to thank for such desserts-cum-cereals at Count Chocula and Lucky Charms. While sickly sweet cereal may be nothing new for those who grew up mostly on Cap’n Crunch and Cookie Crisp, turning a candy into a breakfast cereal is truly a new level of “dessert masquerading as a meal.” Per an emailed press release, the Jolly Rancher cereal includes all the classic flavors you know and love, like watermelon, green apple, grape, cherry and blue raspberry. If you’ve ever wondered what blue raspberry tastes like with a spoonful of milk, here is your chance.

As far as appearances go, the Jolly Rancher Cereal looks... pretty much like what you’d expect it to. It’s bright and colorful and looks like someone turned a Jolly Rancher into a little nugget-shaped piece of cereal. The shape is slightly less perplexing than, say, the Twinkies Cereal which, if you stare at long enough, starts to look like tiny, white, cheese puffs. However, eating something resembling Jolly Ranchers with milk and a spoon may require some mental gymnastics.

What does Jolly Rancher Cereal actually taste like? General Mills describes the cereal as having a “bold, sweet, and tangy” flavor in an emailed statement, while Instagram foodie @I_Need_A_Snack_ taste-tested the Jolly Rancher Cereal to...so-so results. They shared that on first sniff, the cereal smells like a bag of Jolly Ranchers. However, when it comes to taste, they said they just taste like re-branded Trix cereal with “a slighttt flavor difference.” (General Mills also manufactures Trix cereal.)

If you want to put your taste buds to the test, Jolly Rancher Cereal is available exclusively at Walmart right now, and will be available more widely starting in March 2020, per an emailed statement to Bustle. A mid-size box costs $3.99 or, if you want to fully commit to cereal for breakfast, it’s $4.99 for family-size box

Candy-inspired snacks are having something of a moment. Back in 2017, Jolly Rancher Pop-Tarts make waves in the breakfast aisle. While no longer sold at most stores, perhaps you can recreate the sweet treat mash-up by pairing the new Jolly Rancher cereal with the recently reintroduced Pop-Tarts Cereal. If candy-inspired breakfast is your thing, you’ll want to scour your local grocery store for Starburst-flavored Yoplait yogurt, which will be sold at most retailers nationwide starting January 2020, per TODAY. Available in cherry, lemon, orange, and strawberry (AKA pink), the Starburst yogurt is perfect if you don’t feel like unwrapping a bunch of Starbursts and wish you could eat the candy by the spoonful.

There is also a precedent for candy-inspired cereal. Last year, Post introduced Sour Patch Kids cereal as a limited-time offer. While you’ll likely have to turn to the internet to find Sour Patch Kids cereal, you’ll be able to find the forthcoming Jolly Ranchers Cereal at your local Walmart right now and a wider range of retailers in March 2020.