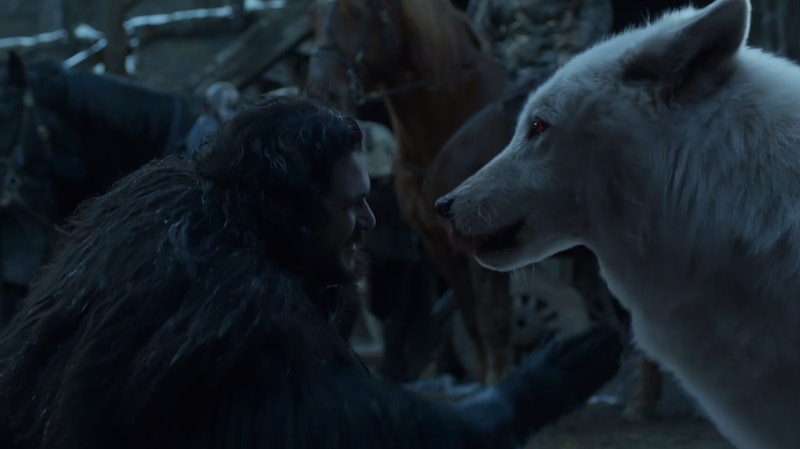 After the Battle of Winterfell, as Jon (Kit Harington) and his army of Northmen set off for King's Landing in order to help Daenerys (Emilia Clarke) take the Iron Throne from Cersei (Lena Headey), he had to say goodbye to his family, his close friends, and his beloved direwolf, Ghost. Sadly for dog lovers everywhere, Jon gave his pup to Tormund before heading into another battle, leaving him behind without so much as a pat on the head to say goodbye.

While there were plenty of reasons for Jon's lack of affection when bidding Ghost goodbye — primarily, according to director David Nutter, because the direwolfs require a lot of CGI work — fans were heartbroken at the way the moment played out. "Since the direwolves are kind of CG creations, we felt it best to keep it as simple as possible,” Nutter told The Huffington Post in the wake of fans' outrage over Ghost not getting his deserved goodbye. "And I think that it played out much more powerfully that way. Keeping Ghost off to the side, I thought that played out better."

While things didn't seem to go Jon's way in the series finale, as he was banished to the Night's Watch once more as punishment for killing Dany, things did look up when he arrived back North to see Tormund, and — more importantly — Ghost. Though their reunion was brief, fans finally got to see Jon give his companion the love and affection that he deserves, which felt especially sweet in the wake of their harsh goodbye.

The series finale of Game of Thrones brought the whole series full circle, beginning beyond the Wall and with the Starks discovering their direwolves, and ending with Jon joining the Wildlings to live beyond the Wall, with Ghost by his side. And while that is a fitting ending for Jon for many reasons, it especially underscores the importance of his relationship with his direwolf, who has always been right there with him whenever he could be.

Ghost accompanied Jon to the Wall when he was assigned to the Night's Watch; when he needed to defend Castle Black in Season 6, Ghost was there to fight by his side. In fact, besides Melisandre, Ghost was the most important part of Jon's death and resurrection in Season 6, as he alerted Davos to his murdered owner and was standing guard over him when he was brought back to life by the Red Woman.

Ghost's loyalty to Jon has been one of the longest running themes of the show — after all, he's the only one of the Starks' direwolves to survive the entire series. So to end Jon's story by reuniting him with his beloved pet, who has proven himself to be more than just a loyal, loving pup, it proves that Jon will have someone by his side to protect him, no matter what lies ahead of him beyond the Wall.