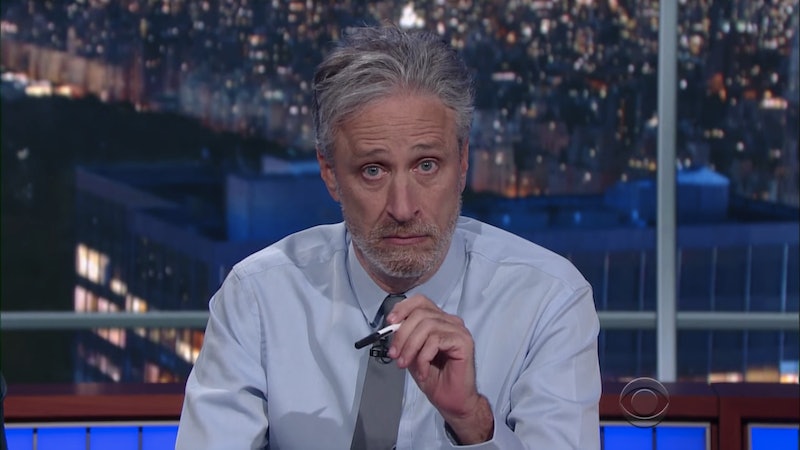 Last Friday, White House Press Secretary Sean Spicer reportedly excluded journalists from numerous mainstream news outlets, including the New York Times, CNN, and most of the foreign press, from participating in an informal press briefing. The move was widely seen as one of the most extreme measures taken against the media by the Trump administration, but on Monday night's episode of The Late Show with Stephen Colbert, Jon Stewart had a message for the media: Move on, and just hold Trump accountable.

Stewart delivered a minute-and-a-half-long monologue, looking straight into one of the show's camera's, advising the press on how to cope with this breakup.

Hey guys, hey media. So I heard Donald Trump broke up with you. Stings a little, doesn't it? Finally thought you'd met your match: a blabbermouth who's as thin-skinned and narcissistic as you are. Well, now it's over. Well, good riddance, I say! Kick. Him. To. The. Curb.

It is time for you to get your groove back, media. 'Cause let's face facts, you kind of let yourself go a little bit for these past few years. Put on a few pundits, obsessing 24 hours a day, seven days a week about this one guy. 'What's Donny up to? Did he say anything about us? You think he's gonna come on our show? Do you think he even likes us? He doesn't even have to come on, he can just call us, oh Donny, please just let us know you're ok!'

And the whole time you're chasing after Donny, the rest of us are thinking, 'Can't you see he's an a*shole?' No, you tried to defend him! 'No, no, no, no, that's just primaries Donald, that's just election Donald, you'll see! We can change him! He'll get presidential!' Yeah, how'd that work out? It didn't. And do you know why? Because 70-year-old men don't get less cranky or racist as time goes by. Unless — there was one instance. Unless, if I remember once correctly, unless they are visited at night by three spirits.

Reporters from the Associated Press and Time boycotted a White House press briefing following their peers' exclusion from a prior briefing. Spicer claimed that the assertions he blocked any press from a briefing were "ridiculous," as the pool of media outlets included in briefings rotates daily.

"They were not part of the pool," he said. "That's what they don't want to tell you. So the fact of the matter is that the Associated Press, the wires, and a couple of the other papers were part of the pool. They came, and we expanded the pool to allow some additional outlets to come into the gaggle, and I think any assertion that they were banned or whatever is completely ridiculous. [The White House Correspondents' Association] tell us who's in the pool; we don't tell them."

Whether or not Trump and his staff plan on limiting members of the press into briefings, Stewart is right in that the media needs to focus on continuing to hold Trump accountable regardless of his opinions on the press being "the enemy." There are clearly many sources within the White House who are more than willing to share information with journalists on everything going on within the new administration, so while press briefings provide a great chance to directly ask the administration questions, there are other ways of obtaining information the public needs to know.

Like Stewart said, it's time for the press to get its groove back.