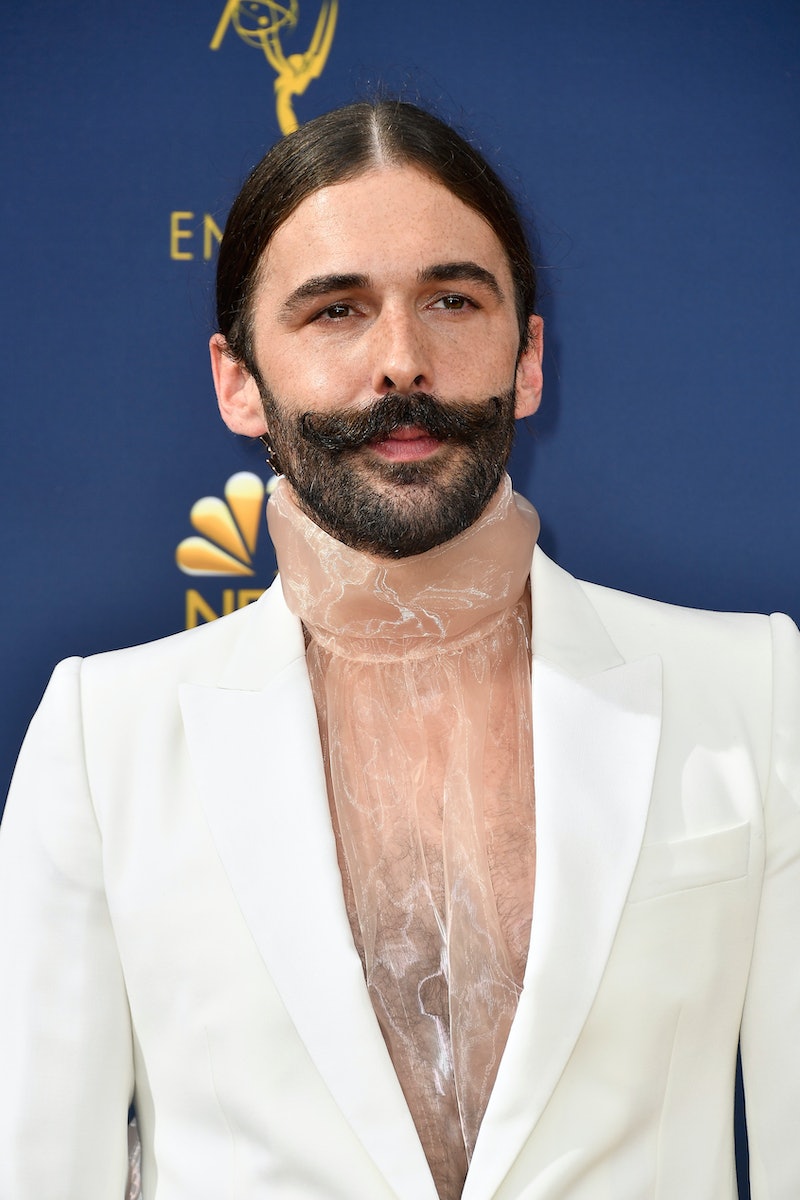 Jonathan Van Ness, everyone's favorite hairdresser from the latest two seasons of Queer Eye, was spotted on the Emmys red carpet in a mesh top. And, as he would do with his hair dryer, he simply blew everyone away.

Of course, Van Ness' cast mates also scored major style points, looking equally handsome in their red carpet looks; Bobby Berk, Karamo Brown, Tan France, and Antoni Porowski are not ones to shy away from style, after all. But JVN's see-through number truly stole the show.

He's lovable and eye-catching for so many reasons (his personality, his talent, his man bun) but also for his amazing, over-the-top fashion choices. Van Ness has quickly become a style icon in his own right, and his mesh moment from Monday night's Emmy awards helped prove it.

The pink hued sheer top wrapped jauntily around his neck and draped down from there, offering a breezy look for what was reportedly a very hot night in Los Angeles. It paired so well with his white tux, which he wore both buttoned and unbuttoned as he strolled down the carpet.

He finished the look with a purple bag, and chose to wear his hair pulled back — despite the fact he's known for his flowing locks. Oh, and let's not forget that he rocked a handlebar mustache, which was all sorts of amazing.

The look as a whole was just so chic, and so very Jonathan. The flare leg on his pants was fresh, as was the little hint of black shoe peeking out.

It feels like we've known Van Ness and all his style for decades, but it's really only been seven months since Queer Eye first dropped on the scene. Season one of the Netflix show was quickly followed by a second season — much to the joy of all its many, many fans — and already it's managed to snag three Emmy wins.

Van Ness has been spotted on many red carpets since we fell in love with him — and the show. And believe it or not, this wasn't the first time he sported a mesh look. In fact, he wore a black mesh top to the Creative Arts Emmy Awards earlier this month, which he paired with a sparkling skirt and platform boots.

He attended this red carpet with his boyfriend, Wilco Froneman, a 32-year-old South African citizen and rugby player, according to PopSugar. Along with his now-signature mesh top, JVN also wore his long hair half up and half down, and again worked that handlebar mustache. Here he is with his boyfriend and Patton Oswalt, looking positively dapper.

Back to Monday night's show, we got to see JVN's outfit one more time later in the evening, when he graced the stage with his cast mates to present an award. And with the stage lights, the whole outfit took on a whole different tone — and looked even better, if that's possible.

No one can rock an outfit like that quite like him. Whether he's styling hair on everyone's favorite show, or walking a red carpet in a chic top, JVN has certainly earned a spot as a style icon.