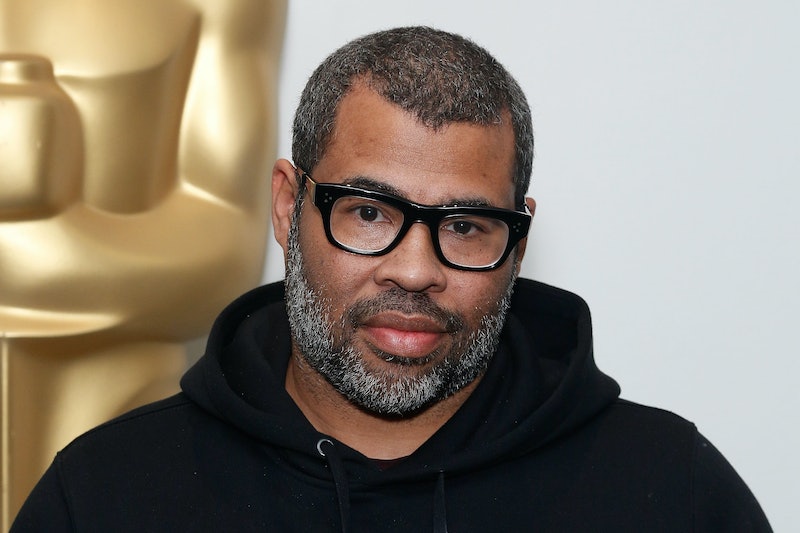 While it's hard to imagine that there are any actors in Hollywood who would turn down the chance to star in one of Jordan Peele's films, the writer and director isn't likely to invite just anyone to star in his upcoming projects. During a recent conversation with Upright Citizens Brigade founder Ian Roberts, Peele admitted that he doesn't "see myself casting a white dude as the lead," in any of his upcoming films, according to The Hollywood Reporter.

Speaking about the success he's had as a director with Get Out and the recently-released Us, Peele explained that he sees it as a privilege to make big-budget movies with black actors. "The way I look at it," Peele said, "I get to cast black people in my movies. I feel fortunate to be in this position where I can say to Universal, 'I want to make a $20 million horror movie with a black family.' And they say yes."

As a result, Peele said, he wants to continue to highlight black actors and stories, saying, "I don’t see myself casting a white dude as the lead in my movie." Of course, the Oscar winner later noted that he was more interested in telling new stories and highlighting new perspectives with his work than anything else: "[It's] not that I don’t like white dudes, but I've seen that movie."

After the writer/director's comments made headlines, This Is Us star Sterling K. Brown supported Peele's decision to continue to write about black characters by tweeting that he wanted to work with him in the future. "Ooh ooh ooh...I’m Black!," Brown wrote, along with a hand-raised emoji.

Peele's desire to showcase black talent on the big screen is likely a result of his career in sketch and improv comedy, where, according to THR, he noticed a lack of black performers. "I knew I had to leave," Peele said about his decision to drop out of Sarah Lawrence college in order to pursue a career in comedy. "But it's not a classically lucrative industry, so it's not like I can recommend that black people get into it because it doesn't pay."

Peele also admitted during his talk that he wasn't sure that audiences would respond well to Get Out, because of its subject matter. "Every two weeks I'd go, 'What the f*ck am I doing?'" Peele recounted of the early days of working on the script, which would eventually earn him the Best Original Screenplay Oscar. "'I'm writing a movie where a black man is victimized and all the white people are evil and I'm trying to get the audience to have fun.' But if you could make that fun … that's what brought me back."

In addition to continuing to showcase black talent in his films, Peele has cast a diverse group of actors in his upcoming reboot of The Twilight Zone, which will premiere on CBS All Access in April. In January, CBS TV Studios announced on Twitter that Jessica Williams will appear in a star-studded episode of the mysterious show, just one month after Walking Dead alum Steven Yeun was added to the cast. While Peele has been characteristically quiet about what fans can expect from the reboot, he did admit that he was heavily influenced by "The Monsters Are Due on Maple Street," from the original 1960s television series for the new episodes, according to THR.

"It points out the ugliness and flaws of humanity," Peele explained of the episode, which chronicles a neighborhood who think aliens have landed in their town. "That's what I like to do with my stories. The real monsters are within us. When people get together we are the greatest monster we've ever known."

And with his commitment to telling diverse stories, it seems as if Peele will continue to come up with innovative, terrifying and exciting new ways to reflect that thought in his upcoming projects.

More like this
Lin-Manuel Miranda & Tituss Burgess React To 'Little Mermaid' Casting Backlash
By Radhika Menon
The 'Bachelor In Paradise' Schedule Shifts To 4 Hours Every Week After The Season 8 Premiere
By Brad Witter
Nicola Coughlan Shared A Lady Whistledown Excerpt From ‘Bridgerton’ Season 3
By Grace Wehniainen, Alyssa Lapid and Sam Ramsden
The 'Andor' Timeline, Explained
By Gretchen Smail
Get Even More From Bustle — Sign Up For The Newsletter